We started the Christmas season off with a dinner here at home with our son Lennie, DIL Lois and grands Maddie and Jordan. 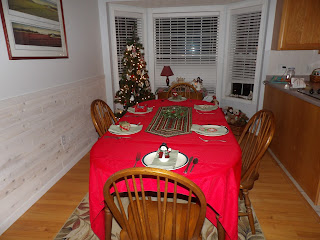 My attempt at being festive 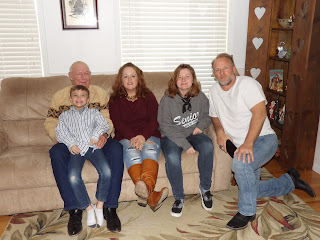 We left Cullman on Thursday the 20th.   We drove 410 miles to Rural Retreat, VA where we stayed the night at nephew Jasons house.  It was so nice of Jason and Kelly to move to that area.  It is almost exactly half way between our house and my daughter Terri's near Hershey, PA.  Jason is my sisters 2nd son.  His brother Jim and family also live in Virginia in nearby Wytheville.

On the 21st we arrived at daughter Amy and SIL Scott's  house in Maryland.   Here are granddaughters after opening one of their gifts. 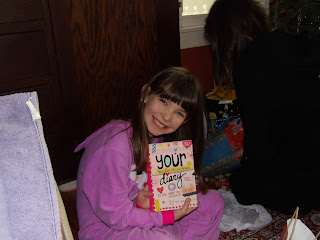 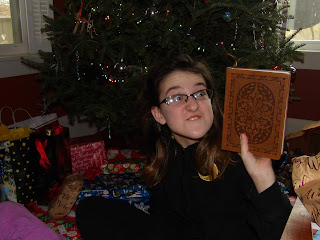 Regardless of Charlotte's silly face making she really liked her sketch book.

On Sunday the 23rd we took the girls with us and drove over to NJ to surprise all our friends at the church we attended when living in NJ.    Later that day we had dinner at my nephew JRs and his wife Vadra's new house. 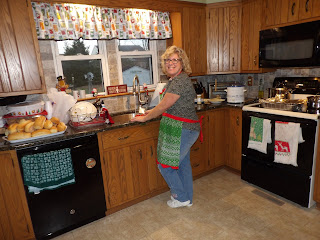 Vadra getting ready for the crowd. 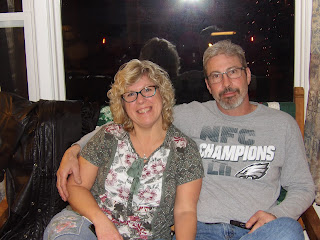 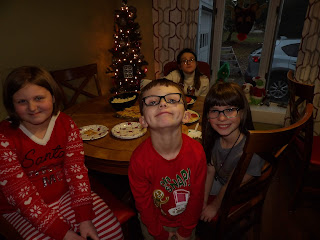 Abby (on the right) Charlotte (sitting by the tree) and two of my sisters grandkids, Natalie and Jon. 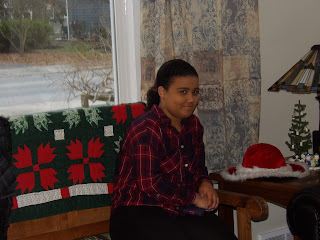 Another of my sisters grandchildren.  Siani. 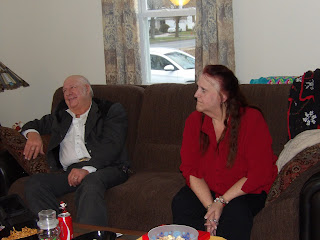 Leonard and my sister Debbie

Then on Monday, December 24 we traveled to my daughter Terri's. 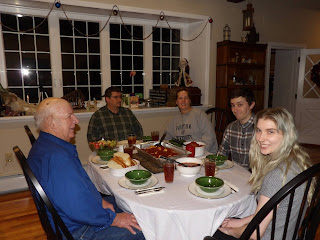 Terri outdid herself again.  Both Christmas Eve and Day dinners were fabulous.

Shame on us.  We should have gone to church Christmas Eve.  We were all exhausted. So a little poker playing and early retiring. 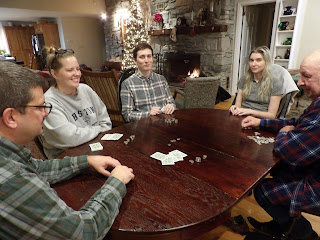 Terri wants all to know.   She was wearing a very large, baggy sweatshirt.    Had I been in the picture whatever I wore would not hide the fact that I've eaten WAY too many cookies, candy and good stuff this past month.

We left Pennsylvania on December 27 again staying at Jason and Kelly's half way home. 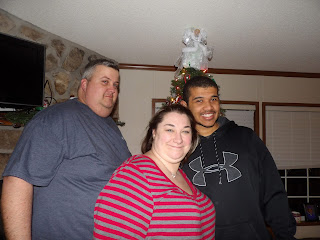 Jason, Kelly and Lance who is another of my sisters grand kids.  He recently moved to Virginia also.

All in all, we saw so many friends and family in our quick 9 day trip.   And as always it's good to be back in Sweet Home Alabama.

We were invited to our son and daughter-in-laws house for dinner.  They live about 20 miles from us.    I didn't take any pictures!   I forgot.   Lois sent me a picture of the group and it is on my phone.   Not being terribly tech savvy I have no idea how to get it on to my laptop.  Lois, I need your help next time you are here.   Please.

Regardless, it was a fine day.  Lois was especially thrilled as her daughter, husband and 3 kiddies came to visit from Louisiana.

This is Bob and Linda Webster 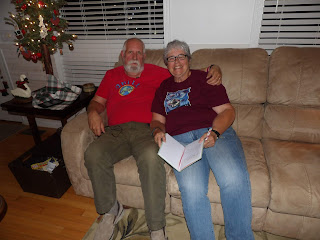 We know Linda and Bob from when we all lived in New Jersey.   We met them through the Marriage Encounter program.  They retired approximately the same time we did and spent a year traveling before settling (mostly) in Maine.   They are also NOMADS.   Bob is a retired United Methodist minister, Linda a retired teacher.   They were  traveling back from  Texas where they did some NOMADS work and visited with a daughter at Fort Hood.   We invited them to park in one of our RV sites. When they left here they were headed to Virginia to visit two more daughters before going home to Maine.   We were so thrilled to have them stay overnight and visit for the evening.    Hopefully they will visit  again when they return to Texas in March.

This past weekend we took a little drive.    606 miles each way.  We left early on Friday, over-nighted near Hammond, Louisiana and moved on to Len's sister Sissy and her husband Davids home in Orange TX.   Why?   Sissy was hosting a dinner for Lens siblings and spouses.

The brothers and sisters: 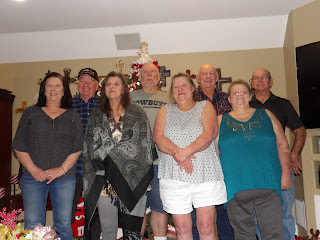 The siblings with their spouses 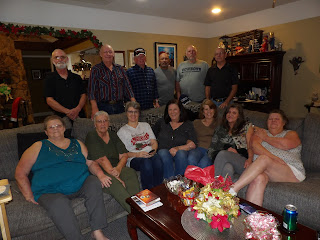 What a great night.   It's always fun to get together with this rather large family.   Heck, this ain't nothin'.    Should see them when the kids, grand-kids and great-grand-kids get together.          Needs a W I D E lens.

We left Orange yesterday and drove straight on through the 606 miles and got home last night.

Before we went to Sissy's on Saturday we stopped for a visit with our friend Diana who lives in Sulphur, LA.    We try when in the area to spend some time with Diana.   It wasn't a long visit but it was a cherished one.

After we left Sissy's on Sunday we grabbed breakfast with our dear friends Judy and Leonard who live in Baton Rouge.   We always try to make it a point to meet up with them on our way through.  We met Judy a few years ago when we were camping at Raccoon Valley Campground near Knoxville, TN.   She's is a dear friend to both of us.  And it's easy to remember her hubby's name. 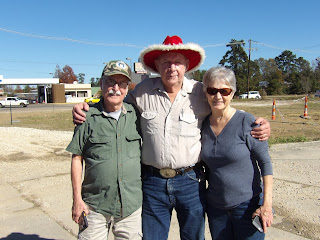