Now that I have your attention, I will explain.

Disgusted?    At our politicians, both sides.

For the last few years Rand Paul has put out his list of needless spending by Congress.    It is shocking.

Study Why adults watch so much TV   1.2 million

To study why people fear the dentist    1 million

These are just a few of the crazies.     Altogether the list totals 54 billion, 747 million and that doesn't include our giving Jordan millions to build a border wall or the money that goes to Pakistan for gender studies.

I want to know who applies for this money.    I think there needs to be a list of what politician applies for and wastes money on projects such as these.   The information needs to be distributed to the people in the Senators or Congresspersons State and district.   Then VOTE THE BUMS OUT.

What else am I mad about?    The distribution of the vaccine.    In some states prisoners get vaccine before the elderly.   Congress had their shots and now in the coming week 2 staffers in each Congressional office will get a shot.   Elderly and the chronic sick again on the back burner.

The nerve of elected officials.   One Congressman in NY had a skating rink shut down.  Kids not allowed to play hockey.   Then he played.   There are many examples similar to this.

Our cities are crumbling.   In the 1950s Detroit was our richest city.  It is now among our poorest.  Car manufacturing and other manufacturing moved to China and other countries that abuse their citizens.    Bring manufacturing back.  Then there will be jobs, jobs, jobs.    We all know how hard it is to find something NOT made in China.

And now to the Stimulus money.    If the above stupid spending was eliminated this country could better assist those businesses suffering due to shutdowns.   Sure, folks love getting those stimulus checks, whether $600 or $2,000.    But many do not really need this money.  There must be a way to determine which folks are really suffering due to COVID shutdowns.   Who has actually lost income.  Help those, only those.

Federal employees still get paid.   Social Security recipients still receive their checks.   Pensioners still get theirs.  (We get both a pension and SS).    Yes, we received the $2,400 earlier in the year.  And we will receive the next amount whatever it is.    I know we could give it back to the Treasury.  For them to waste?   NO!

When we got the $2,400 months ago we found a local family with a need and gave a large portion of it to help them.  We donated cases of food to the local food bank.  I tell this not to brag but to point out that many people felt the need to help.   This is what Americans do.    Look at what Dave Portnoy of Barstool Sports has started.   Americans have donated over 13 million to his fund that is  supporting 49 small business so far.    Again, this is what Americans do.   (UPDATE:   53 small businesses saved and 14 million donated as of early Jan 1.

God bless each of you in the New Year.

Not much happening around here.

Yup, not much happening.

The best thing that happened recently was a visit from our granddaughter Lindsey.  She flew up from Pearland, TX for a 4 day visit.     We had planned on seeing her over Christmas down there but The US Navy had other plans.    Lindsey joined the Navy under the Nuclear Engineer program.  She was not supposed to go to Boot Camp until March or so.  However, an opening came up and she jumped on the invite to go earlier.  She leaves on December 16 headed to Great Lakes, IL where she will have to quarantine for two weeks. 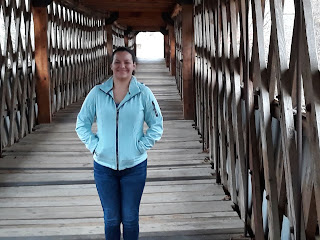 We have had this visitor a few times too.    He is a sweet, sweet boy.   Biscuit does not usually allow other dogs on our property.   But he likes this one. I do too.  They run and play together.   We are not sure who he belongs to but have a suspicion.    We suspect he will be living next door in the trailer that was recently placed there.   No one is living there yet but every few days we have noticed a car or truck there doing some work.   We think he comes with them. 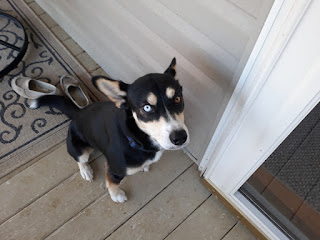 We have lightly decorated the house for Christmas.    We have LOTS of decorations in the basement.  However, neither of us feels like lugging stuff up and decorating.   We did bring up a tree and a few decorations were placed around the house.    Nothing like we used to do when living in the 1850 farmhouse in NJ. 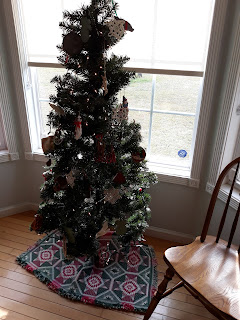 Only exciting thing to happen here was a Boondocker got stuck.   I directed him where to back in using the driveway, but he missed the driveway and got bogged down in the yard.   It had been raining all day. 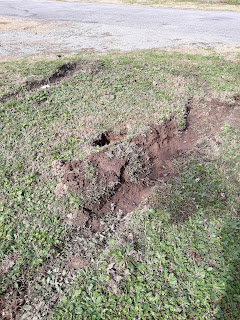 They were in a 43' diesel pusher motorhome.   Quite heavy.  Len tried to move him with our tractor but no luck.   This happened about 2 in the afternoon.   They ended up calling their roadside assistance provider.   Did not get here til 8:30.  Needless to say it was pitch black outside.   They remained in the Motorhome awaiting the tow truck and would call me to keep me updated.

With some effort the tow truck got them out.   Needless to say they did not stay the night but went on down the road.   I told them about a large rest area about 8 miles down I-65.  I texted them the next day and that is where they stayed that night.

Today we have mild weather.  Len is out on the tractor trying to fill in the ruts.  Thinking he is making a few more. 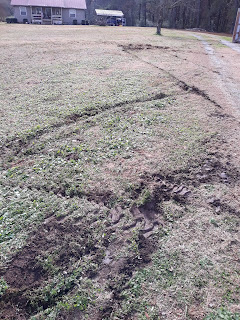 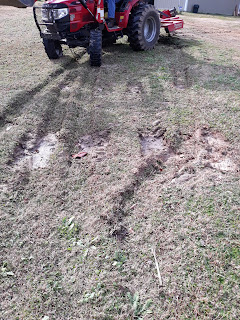 As I said it is mild out today.   When I went out to get the mail I see our forsythia bush has some flowers on it. 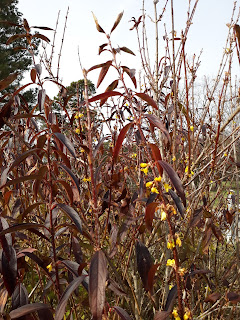 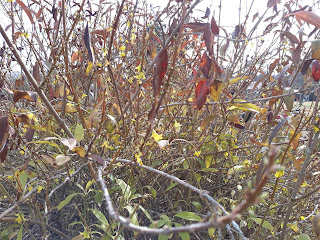 Oh my,  Leonard just called me.  He said he broke a valve stem on a tractor tire and the tire is flat.  He took the tire off and is going to town to get it fixed.    I am going to give him HECK (or something like that) when we gets back.   He should not be doing that himself.

On a good note, all Christmas shopping is done.   All gifts that have to be mailed have been sent.  And the rest are wrapped and ready.