For the last several months Leonard has had a difficult time health wise.   We are now seeing a change.  We were told when he started his medication (Adempas) that it would take a while but hopefully he would see an improvement.

For months he had sat in his recliner, often all day in his PJs.  He would come to the table for supper.  Breakfast (if he had any) and lunch would usually be in the chair.   He had no strength.  Slept most of the day.

The last couple of weeks we have seen a noticeable improvement.   He still tires.  He is still on oxygen (as he will always be).  He still can not lift a lot.  He is able to do more.    But he does not vacuum.   Well, can't blame on his disease.  He never did.

My bag-less vacuum gave up the ghost.  Had lots of Biscuit hair wrapped around its beaters.  Motor started smoking and quit.    I went online and found a Bissell for pets. 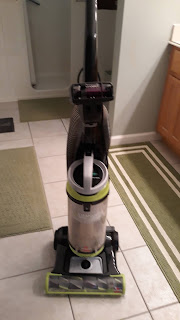 What a job it did.   I used it on three area rugs (office, dining room and living room) plus the wall-to-wall in our bedroom.   Had to empty 4 times.  Glad we only have one dog.

A couple of weeks ago I was working in my flower bed and came across 4 duck eggs.  The work of our Muscovy Elsie.    I made the mistake of taking all 4.  So she moved her egg laying nest.  We didn't know where.    Three days ago I found the nest in a wooden area.   She had been busy. 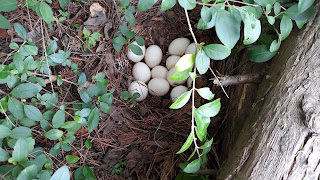 I marked and left two of them and took and other 10.  We are now eating duck eggs.  Not bad.  Len looked yesterday and there were 3 eggs.    Yesterday working in the yard we had come across a few cracked open shells.    Raccoon?   Possum?   Today I checked her nest.   Only shells there.  Time for her to move again.

When we had ducklings Len made a cage from them.   It now sits by the pond but the grown ducks have not been using it.    This afternoon I saw this. 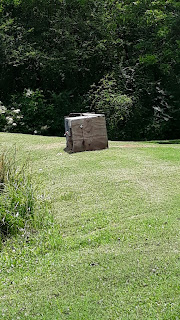 Look closely.   There is Elsie sitting inside looking out.    About an hour later I walked over to it.  An egg!    I left it there hoping whatever has been taking her eggs don't see it.

As I said earlier, Len is up to doing some work.  We have a cedar tree and a magnolia tree that had low branches I would have to fight when mowing.   Solution.   Len put the forks on his tractor, lifted a wooden pallet with the forks.   Then put a generator on the pallet with his electric chain saw.  He put a safety belt on and trusted me to lift him. 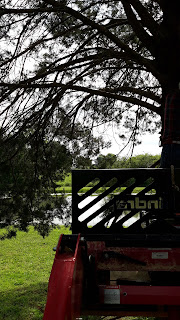 Cutting the branches of the cedar tree 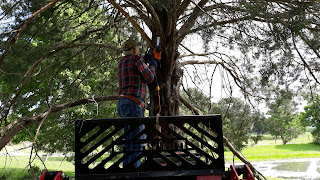 Now I can easily mow under it.  And don't get itchy cedar needles down my shirt. 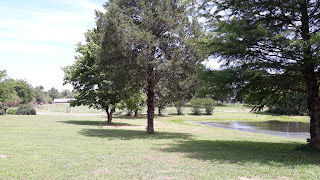 Cutting the magnolia branch I would conk my head on. 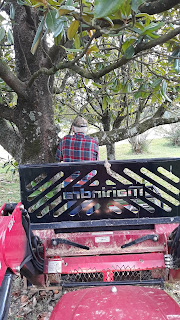 Much better.  And out in bloom too. 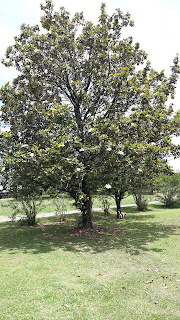 One last thing.   When we bought this property there was a double wide trailer out by the shop.  The owners mother lived in it.  We did not want it there so they sold it and had it removed.   That is where we have RV sites.     The water hook up and spigot was low to the ground.   Two years ago I was mowing and hit something.   I thought gosh, what did I hit.   When I turned the mower around it looked like Old Faithful Geyser.   So that I would not run over it again, Len raised the whole thing and added a 4x4 post so I wouldn't miss it. 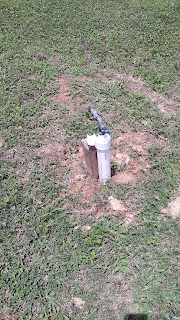 Got to report last Sunday I didn't miss it.  I hit it straight on.    A flood.   After turning the water off at the road Len started digging down.   We quickly knew he wasn't able to do this.   He does not have the strength to dig and if he got down on the ground to fix it he would have difficultly getting up.

I called Ashley and Gary our nearest neighbors.   The sweet couple came right over.  After going to Lowes for a part, Gary fixed it for us.    We are blessed to have people nearby always willing to help.  Gary told Leonard he would cut down the branches.   We saw Gary yesterday and he just shook his head when Leonard told him he had done it.   I think he was proud of himself.