NOMADS Project with a little blimp. 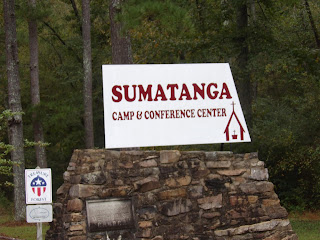 only about 55 miles from our home.

We have had a variety of things to do.    Building a life guard chair and painting it along with 3 previously made chairs. 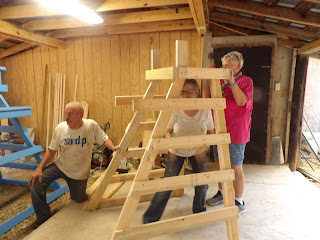 Running electrical wires and hanging lights in a large social hall.   Repairing and replacing screens on cabins.  Building a sort of pool table where instead of cues you roll the balls.  Making  and installing darkening shades for the game hall. 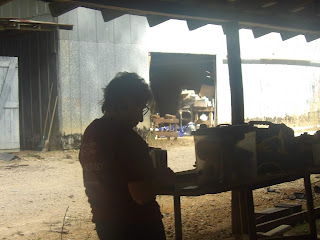 The first few days Leonard was in his glory.  Driving the dump truck and delivering the dirt to repair a path.

Repairing and painting part of a roof  and eaves that was damaged by a fallen tree. 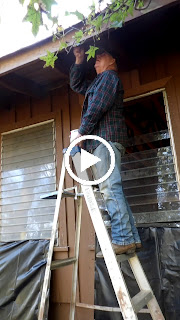 This campground is the 3rd largest Methodist campground in the country.   It's huge.  This is the lake.  No swimming allowed,  there is a pool. 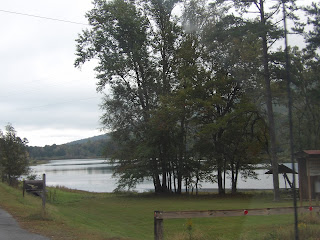 We have great WIFI here courtesy of the camp.   But no cell coverage as we are down in valley surrounded by mountains.

Since we work only Monday to Thursday our plan was to return to the house Thursday afternoon and back to camp Saturday.  Lawn to be mowed and bush hogging to do.

Last weekend we left according to plan.  But Thursday night Leonard showed me his legs and feet.  Severe swelling.  And I had been telling him his breathing is off.   So to the ER Friday morning where all sorts of tests were done.   Congestive heart failure.   They injected Lasix while still in the ER that got him moving FAST.   He was admitted to the hospital for overnight.   By the morning there was a big difference in the size of his legs and face.  Breathing better too as the fluid was being drained from around his heart.  We returned to work Monday late morning.

We went home this weekend too.   Had a doctor follow up yesterday.  She reviewed his most recent blood work and cut the Lasix in half and also the meds to control his potassium as it was too high.

Now we are back at camp.   One more week of volunteering here.

The camp has provided us with lunch each work day of which we appreciate so much.  We attend nearby Lester Memorial Methodist Church each Sunday and their Wednesday night dinners.

This is the first time we've worked with Dennis and Nancy Williams and Cheri and Butch Frey.  I have to say we are a great team.

Our black cloud is spreading.


Our annual NOMADS meeting was held last week in Memphis.   We were scheduled to drive over on September 21.    We get hooked up and ready to pull out.    No directional lights, no brake lights or trailer brakes.    We unhook and go to Ford thinking the issue was with the truck.  $5.99 for a fuse, $190.00 for them to put it in.

We come back home.  Hook up trailer.  No directional lights, no brake lights or trailer brakes.  Back to Ford.   The fuse was blown.  This time no charge for a replacement.

By that time we knew we were not heading out that day.   Our temporary solution was magnetic lights on the back bumper.   Len had to crawl under the rig and run wiring from those lights to the truck.

The next day we were off and running with no issues.

We have a 3 week project starting on Monday in Gallant, AL.  I got to thinking.  We are on the route of the other 2 team couples as they travel from Memphis to Gallant.   We invited them to park in our RV sites for this week.   From left to right,  Cheri and Butch Frey, Dennis and Nancy Williams and of course Leonard. 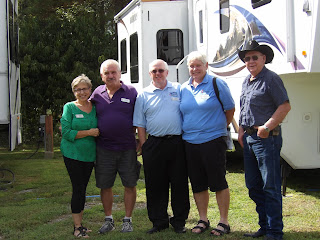 We left Memphis on September 28 as did the Freys.  The Williams left on September 29.    As we were on the way home, the Freys called us.  On the way out of the park they heard a loud noise from their trailer.    A spring had broke.   They found a new one and replaced it and arrived here late in the afternoon.  However, their check engine light on the truck came on.  They took it to the Chevy dealer Monday morning.  There was a problem with the DEF system causing unexpected costs.

The Williams arrived on September 29 as planned.  But a few days ago they found a leak under their bathroom sink.  A trip to Loews for parts and it was fixed.

In the meantime we took our rig back to the dealer.  We got it back today.  The problem was some wires were caught between (I forget what Leonard told me and I'm not asking again) something and something causing them to short.

On Tuesday night we all were sitting in our living room.  I became very uncomfortable and asked if anyone was hot.  Cheri was.  I checked the A/C and it was set on 75 but it was 84 inside.   Leonard checked the registers.  Hot air was blowing out.  We turned off the A/C, waited a bit and turned it back on.  Still hot air.  We called our home warranty company.  They contacted a service rep who said he would be here yesterday.   He called and cancelled.   He said today no later than 10:30.  It's 2:30.  We called his number. Mail box full.

This is SOOOOO typical here.  Five no shows by Verizon people.  Two no shows by a Lowes installer.  A no show by a man scheduled to pick up metal.  One no show by a person to give us a quote on digging the pond.  Thinking there are more but they escape me just now.  I am learning this is a common occurrence in this area.  Get used to it.

While in Memphis we didn't do much touring.  Took a drive around. 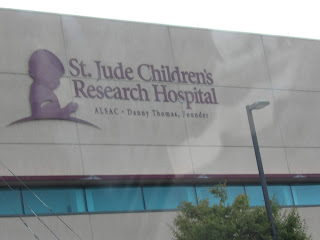 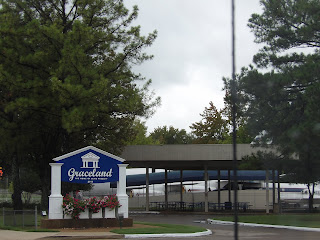 Of course there had to be certain entertainment at the meeting.  That's one hour I'll never get back! 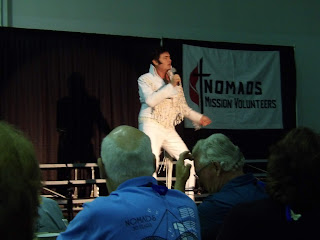 It's been a joy having the Freys and Williams' here the last few days.  Even through our black cloud extended to them.