As we move into Fall

The days are getting noticeably cooler.   It is a welcome relief.   This is when we can turn off the A/C and open the windows.

We are again getting busy with BoondockersWelcome.com hosting.   Our 58th guests just pulled out and the 59th will arrive later today.

Len has been going to Physical Therapy for the right shoulder.  Comes home aching.  He is scheduled to have the left shoulder replaced down at University of Alabama at Birmingham Hospital on October 19. And this is always on contingent.   He was to have it done last year but after his pre-op results came back they cancelled.   And now there is the Covid situation again here in Alabama.  Most hospital are filled to capacity.   If it's a go, he goes into the hospital where they will insert of heart cath the day before surgery and keep it in during surgery.  His cardiologist will be there to monitor him.

Last weekend Len's cousin David, who is a long haul truck driver,  was making a delivery up in Huntsville AL only about 45 miles away.   He got there Saturday afternoon and delivery was Monday.  So we drove up and brought David back for the night.    Don't they resemble each other.   As someone remarked, they have the same hairline. 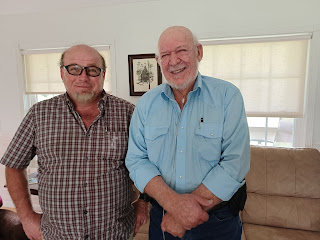 We had a frustrating few weeks with our pond.   It became covered in red duckweed.  This variety of duckweed doubles every day until pond is completely covered not allowing oxygen into the water.  We had a major fish kill.   There were our large catfish floating on top.   The blue gill washed up onto the ground.   There must have been at least 50 that I saw.   The blue herons and egrets where here most days having a feast.   And Biscuit, being a beagle, likes to roll in dead things.   He got more than one bath during those days. 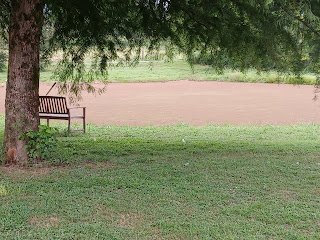 I called the county agent.  He said that once the water turns cold it will die and sink to the bottom but grow back the next year.   To control it, it will have to be treated as soon as soon it appears.

I don't think the water turned much colder, but shortly after talking to  him it disappeared. 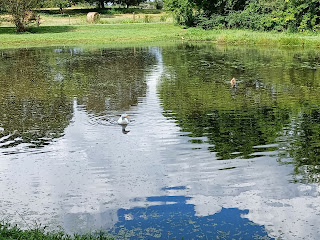 The pond is now loaded with frogs and I have seen just one fish.  We will restock with some catfish in the Spring and hope to catch the Red Duckweed before it again takes over.

We have a couple of home improvement projects coming up.  We have stepping stones as the sidewalk around the house.  Some set in concrete, others laid there.   They were there when we bought the house.  I have sold the movable ones.   We have contracted to have a full sidewalk starting where we walk down the front steps, wraps around the front of the house, across the front of the carport and connects with the slab we laid at the back porch.

The other project is a full house Generac generator.  We do have times that we lose electric due to storms, etc.   With Leonard on oxygen and we since enjoy all the comforts of home electric,  this was an easy call.

This weekend our Granddaughter Lindsey graduates from her first Navy A School over near Charleston, SC.  She is in the Nuclear Engineer Program.  We leave on Wednesday, spending one night on the road and will get there on Thursday.   Graduation is Friday.  We then head back home on Saturday, getting home on Sunday.  Biscuit will again go the our local Doggie Camp.