We are home owners!

Today was closing day on our new home.   Since the moment I saw the house online, everything went so smoothly.  EXCEPT FOR LAST FRIDAY.

The bank here in Cullman said I could wire the funds we were putting down from our bank in NJ to the attorneys office where the closing would take place.  So on Friday I called the bank.   Now, I have been dealing with Colonial Bank for close about 35 years.  Last year it was acquired by Cape Bank. A few months ago by OceanFirst.  I called the main office of OceanFirst and told them what I needed to do.   Can't do they tell me.  I have to be there in person to sign forms to wire the money.   What?  Closing is Wednesday.  I am in Louisiana.  The bank in NJ is closed Monday.  So am I supposed to hightail it from SW Louisiana to NJ over the Christmas weekend, go to the bank on Tuesday and be back to Alabama on Wednesday morning?  Impossible.

I called the branch office I always dealt with.  Told me the same.  The bank in Cullman called them. Told them the same.

So late Friday the bank in Cullman said they would attempt something else on Tuesday.  They sent me forms to fill out and scan back to them.   HALLELUJAH whatever they did worked.  The money was transferred from NJ to Alabama and ready this morning.  I will be closing all accounts at OceanFirst and cash in my stocks with them to boot.

This morning we did the walk through and had lots of questions.  All answered.  This afternoon we had the closing and met the seller.  What a lovely person she is.   Could not have been easier to work with.  She could not believe her house sold so fast.  We can't believe it either.  The realtor went out on a limb for us as there were 3 other bids.  We made the offer sight unseen with a contingent that if we did not like it, all deals were off.

Today the seller gave us a thick folder of everything she had done to the house since she had it built in 2001.  Also information on the property going way back as it was family land.

A some things need to be done.  First....  There was a double wide trailer that was removed last week. But, the attached porch was left.  The realtor's husband and son are going to dismantle it.  Between them and us, we will make use to the wood.  The porch. 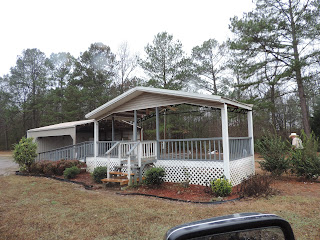 Sad to see it go, but what would we do with it.   The porch is on the left and the garage that was also attached to the double wide is on the right.  That will stay.  Len will enclose the two open sides.  There is a room running the width of the garage and is about 5 feet deep.  The seller said there are tools in that room and more in another out building.  Does Len want them?  Does it snow in Alaska? 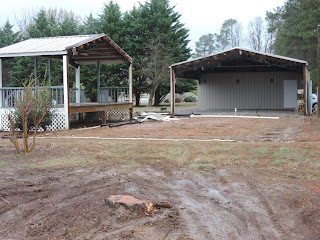 Tomorrow Len will start working on the electrical boxes to get the area set up for our RV.  You can see the pipes running to the septic system directly in front of the garage.  The water connection is also up there.   Our intent is to have concrete laid in the area where the double wide sat.   We will have full hook ups not only for our rig, but for any of our RVing friends who might come to visit.

The seller has 7 days to move out.  She plans to be out by Saturday morning.   Hopefully we will have the electric done for the RV and turned on by Tuesday when we are scheduled to move from the campground.


Way back in 2005 or so I toyed with the idea of full time RVing once Leonard and I retired.  The more I investigated that option the more I liked the idea.  After much discussion we decided it would be a good way to spend some of our retirement.

After various issues, including some health concerns, we finally hit the road in February 2010.  The house was sold, most of our belongings were sold, discarded or given away.  Those items we wanted to keep we stowed in a new utility trailer we purchased and parked at accommodating relatives.

Over these last 7 years we have seen a great part of the country including some of Alaska.  We've connected with some fine people over all these miles.   And at least 3 times each year we volunteered for 3 week projects with NOMADS, a mission of the Methodist Church.   Two years we worked for a few months as gate guards in the Texas oil fields.

Most of the time we were happy to keep traveling.  But we've had challenges.  Health wise, Len now has deep vein thrombosis and has to be on blood thinners.  He has had a knee replacement and back surgery.  I had a stroke.  We've had many breakdowns and mishaps causing damage to both truck and fifth wheel.  We've survived all of this.

But recently I have felt the need for "roots".   I have felt homeless.  My family is now dispersed.  My brother and sister still live in New Jersey in the town where I grew up, my sister in the house of my youth.  My one daughter had moved to Maryland about 10 years ago.  My other daughter, who bought the house Len and I owned in NJ, moved to Pennsylvania two years ago.   So where is home? We love the people at the church we attended when we lived to NJ, but we seldom are in the area. We felt this church was our home church.  It feels less so now.  I do miss those people.

I find I no longer enjoy the moving around every few weeks or even more often.  I dread the setting up and tearing down.  I especially dread the roadway travel.  I have a fear when we are on the highway. Perhaps it is because of the mishaps we've had.

I don't sleep well at night.  Five hours is a good night.  And it is never in one stretch.  A few hours and then awake.  Maybe a few more hours later.  It is after 2 am and here I am, unable to sleep.

So, a few months ago we started talking of buying a house.  Just talk.  But I found myself checking out Realtor.com.    Hence, two weeks ago the house we are buying appeared and everything fell into place.    Will I like Alabama?  I don't know but I am willing to give it a try.  Where do I want to settle?  I don't know but Alabama is as good as anywhere.

We left Alabama three days ago headed to Texas for 10 days then on to Louisiana until time to head back to Alabama after the first of the year to close on the house.  We stopped at a truck stop in Louisiana for the night about half way between Alabama and Texas.   Len noticed something looked wrong.  A hanger for the axle springs was broken and tires were damaged.  He and the man from roadside service did a temp job to get us to where we are now in Texas.  Our home is at the RV dealer where is was purchased, getting repaired.  No idea how long this will take. This is our 2nd night at a motel.  Insurance pays $250 a day for meals and lodging, but only for 5 days.  Work on the RV is covered under it's original two year warranty.

As much as I loved the travel, the people we met, the sights we've seen, I won't miss the crowded roads, the fear of another breakdown, not having "roots".   Yes, it's time.

We will keep our beautiful Open Range RV.  We will take weeks or even months at a time to travel. We don't want to give that up completely.   In the meantime, we are enjoying the anticipation of what lays ahead at our new home.  And maybe, just maybe, I'll be able to sleep again.
Posted by Phyllis at 12:14 AM 6 comments: