Yesterday being a beautiful day, we took a 53 mile drive toward the Smokies 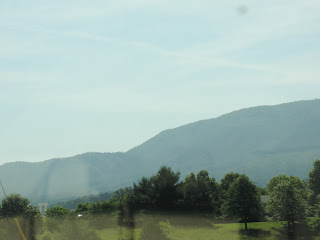 to the town of Dandridge.    Part of the drive was narrow, winding roads with water on both sides. 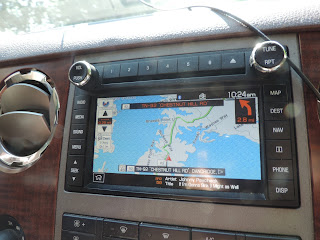 Our destination was the small community of Chestnut Hill, the home of Bush Beans. 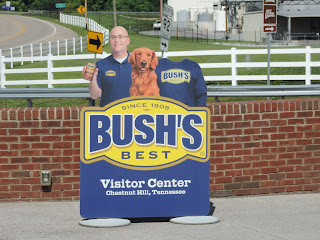 On one side of the narrow road is the manufacturing plant. 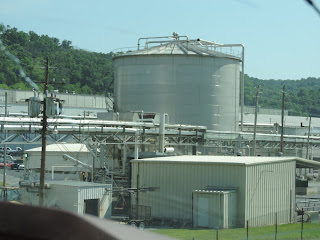 On the other, the visitors center 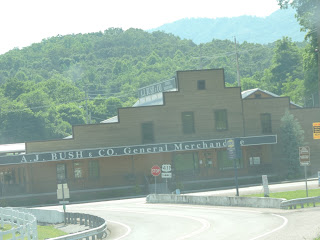 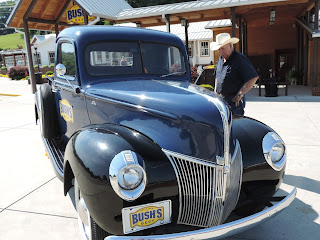 Walking into the visitors center is the gift shop 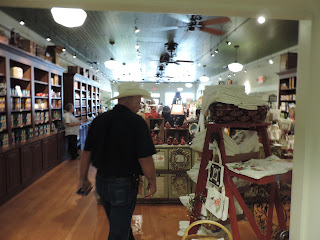 All varieties of Bush beans are sold here plus lots of other good stuff.   We like their beans, especially the grilling label.  The cost of the beans in the gift shop was lower than I pay even at Walmart.  If we had a house, I would have loaded up.  But knowing I have two cans back in the RV, I decided I really didn't have a need.

Every half hour a 20 minute video is shown telling the history of Bush Beans.  The Bush family purchased land in 1904 to start a different business but were approached to be a canning facility. This is the 4th generator of Bush family canners.  For most of their history they had an assortment of products.  Tomatoes, asparagus, kraut, green beans, etc.  Having not read everything in the museum I don't know when the decided it was just beans.

After the video we strolled through their little museum. 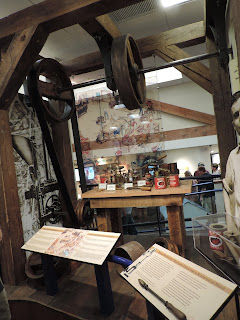 Now they process over 1,000 cans of beans a minute.  Their beans are grown in North Dakota and Michigan.   And processed by the secret recipe.   Duke isn't even telling. 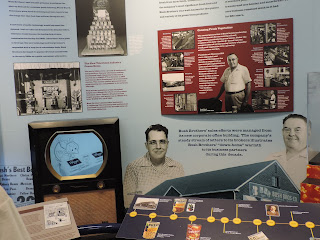 Len getting his weight in beans.  Me? no thanks.  I don't like what the scale says in pounds and I prefer not to see it in beans. 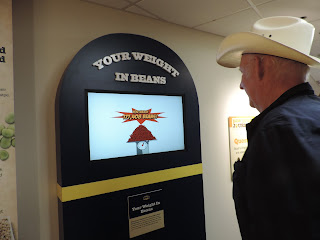 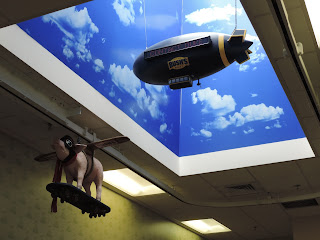 Everyone is invited to get a free picture taken with Duke. 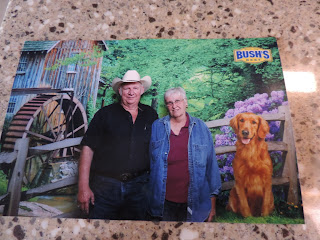 They also have a cafe.   I would have liked to have eaten there, but it was relatively early and we really were not hungry.   Later on the drive back to the campground we stopped at Outback.  That was okay, but I kind of wish we had gone into the cafe and had their pinto bean pie.


We had a mighty fine time back in Alabama.  Got to spend some time with our son Lennie, his wife Lois and the kids Maddie and Jordan. 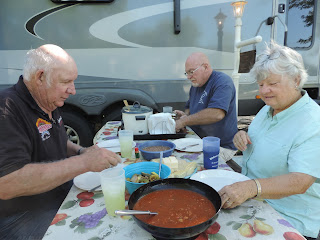 We pulled out of Hidden Cove TT park in Arley, Al on Monday the 16th and drove the easy 280 miles to 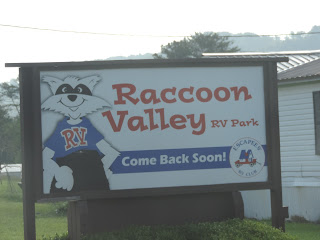 here in Heiskell, TN.   We have stayed at this park a couple of other times.  The first time we met sweet Judy Hughes from Baton Rouge.  The second time we knew she was here again and surprised her when we pulled up in the site next door where she was parked.  She is currently in TN but on the other side of this wide state.

One of the first things we did when arriving was make an appointment at Tennessee RV in Knoxville, an Open Range dealer.   Many people with this model have had trouble with the inverter controller.  It only sends power to one of the batteries.  Because of this, the refrigerator/freezer does not operate when not on shore power.   Although they are very busy with folks getting ready for the first summer holiday, they agreed to see us on Wednesday.   Yup, that was the problem.  They are ordering a new controller and will install it on the 31st.   Very accommodating.  That is when we leave this park headed to Pennsylvania.  Our travel route takes us past their dealership.   We have found Open Range customer service superb.   Few companies offer a two year warranty of which Highland Ridge who makes the Open Range line is one.  Most give just a one year warranty.   So far we LOVE this unit.

When going to Tennessee RV Len saw signs about a boot outlet in nearby Sevierville offering two free pair with the purchase of one.  This morning he said "let's go for a ride".  I should have known. 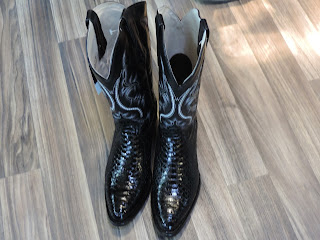 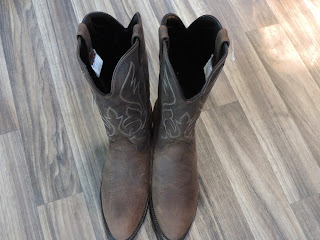 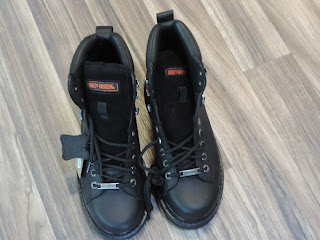 Hidden Cove and beyond

Following church in Vinton, LA on Sunday we headed northeast a bit for the 450+ mile ride to this campground.    As we no longer care to travel more than 300 miles a day, we over-nighted at a rest area on I59 near Hattiesburg, MS.   We found this rest area to be quiet, well lit and minimal highway noise.

We had spent just a few days at this campground back in January on our way west.  We choose this campground for two reasons.   It is in our Thousand Trails membership ($425 a year for 2 Zones) so we pay just $3.00 a night.  It is also relatively close to our son and family in Cullman, AL.  I guess we can call about 40 miles relatively close.  It is an easy drive.

This campground has just 63 sites, many of which are under yearly rental.  But it has a lot to offer.  Clubhouse, Pool (not open yet) fishing, clean and inexpensive laundry and really nice Managers. 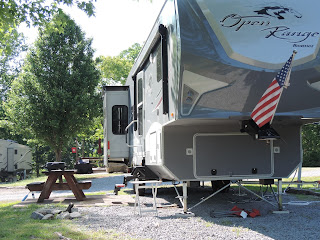 We are directly across from the playground 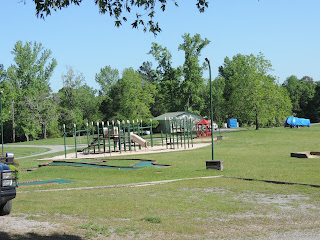 And the mini golf course 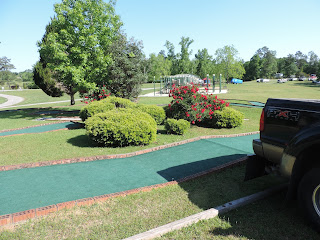 And a short walk down to a finger of huge Smith Lake.  We say we have lake front view.  Yup, can see the lake if we stretch our neck and look through the trees. 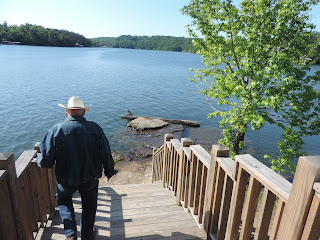 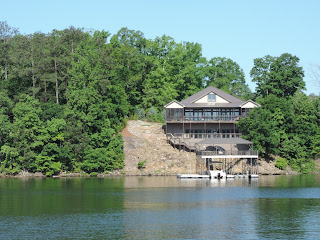 Another great unexpected pleasure......I was sitting at the computer Tuesday afternoon and saw an RV drive by.  On the car was a NOMADS sign.   Len and I were curious if we knew them.  So walked right down to where they were parked.  Yup!  Gary and Linda Williams!  We've worked with them way back in 2010 and have spent time with them while attending annual NOMADS meetings. 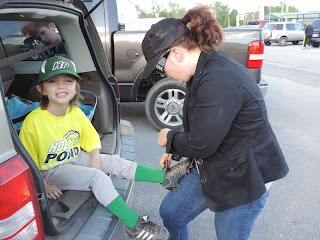 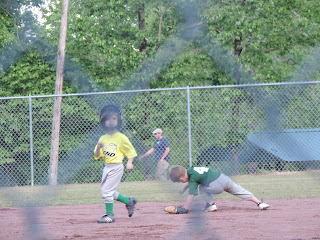 And I received this gift from daughter Terri, her hubby Steve and their dog Cane.  Never thought about carrying a vase in the RV.  All I have are stored away in one of our two utility trailers.  This lovely receptacle was given by Lennie to his Dad many years ago.  Came in handy. 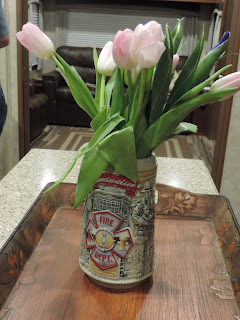 Tomorrow is Mothers Day.  Lennie, Lois, Jordan and Maddie will be coming here to the park.  Joining us for Lennie's lucious burgers and other goodies will be our friends Gary and Linda.  Going to be a great day.

In an hour we go to the ice cream social here at Hidden Cove.  Alrighty then......