Can't always be where we want to be and other thoughts

Here we sit.   Back in Leonard's hometown.

I started weeks ago attempting to make reservations at one of the nicer parks in this town and Sulphur a few miles up the road.   However, there are expansions going on at several refineries in the area.  Every park I called gave me the same answer.  No sites available.  One large park that recently expanded said they would put us on the waiting list.   I asked how many before us - 40!

So, here we are.  We've stayed at this park many times over the years.  It is nothing but a dirt parking lot with hookups.  The price is right.  $350. a month for 50 amp.  Not worth more than that.  Our view is the traffic of I-10 zipping pass.   It's only a month I tell myself.

I've spent today planning more plans for our trip to Disney World in June.   I had reserved for 6 nights at Fort Wilderness and 5 day Park Hopper passes back in September.   We are taking two granddaughters and a great-niece.   Today I reserved for lunch one day at Be Our Guest restaurant.  Then the night before we leave WDW a dinner and show at the campground called Hoop De Doo.   The rest of the meals will either be in the rig and we take into the park.

After our 6 days of Fort Wilderness we go a short distance to another park near Legoland. Granddaughter Abby is excited about WDW, but Charlotte is about Legoland.

Okay - getting off here and getting Leonard started grilling some chicken for dinner.  I made macaroni salad and we have corn on the cob to grill too.   I will probably be disappointed in the corn. I usually am.  No corn anywhere is as good as the Silver Queen we get back in Jersey.

Here is hoping each of you are enjoying Springlike weather and safe travels.

Project done... Back in Louisiana

We finished our three weeks volunteering in Decker United Methodist Church on Thursday. 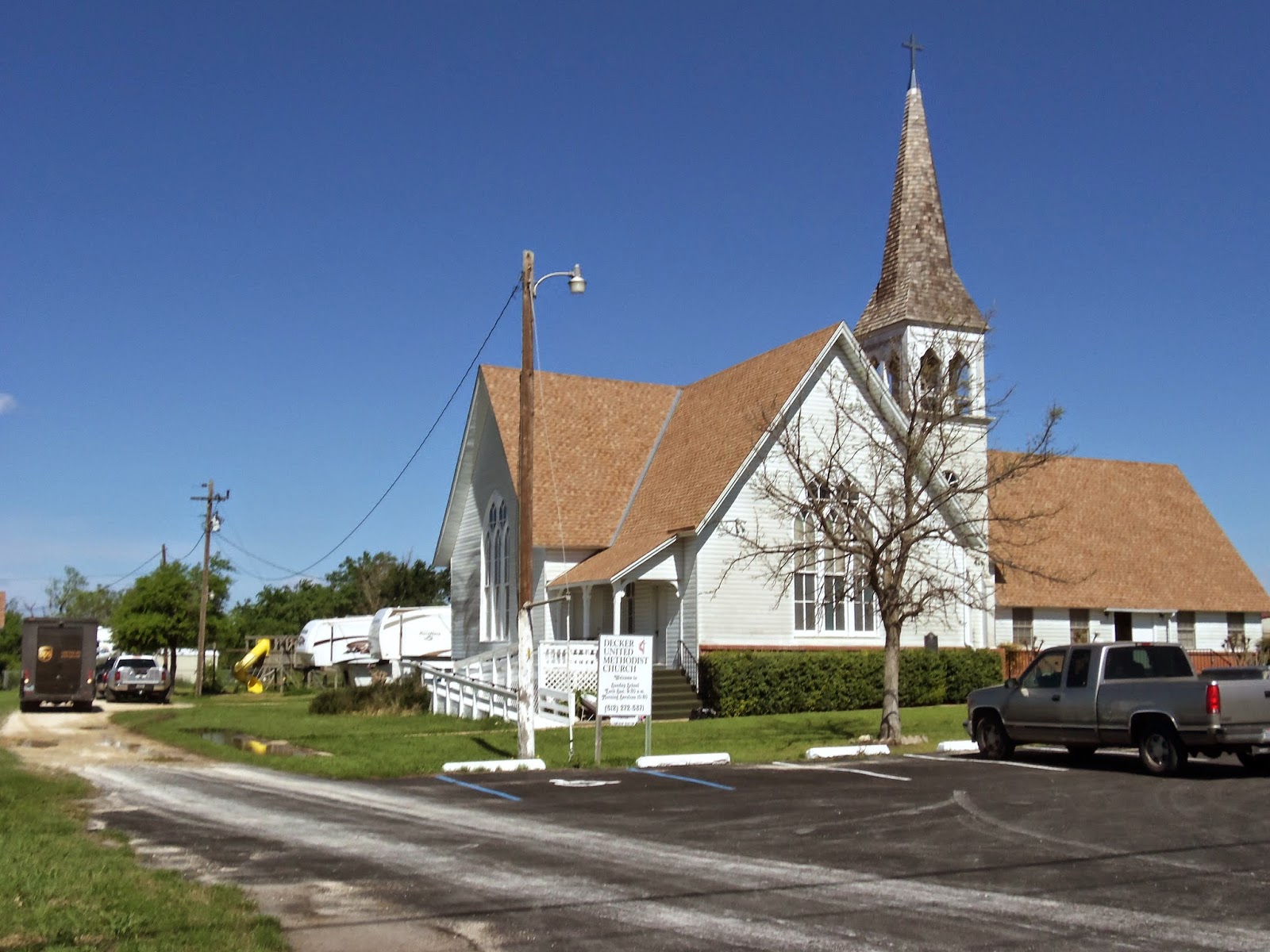 While there we build a new handicap ramp 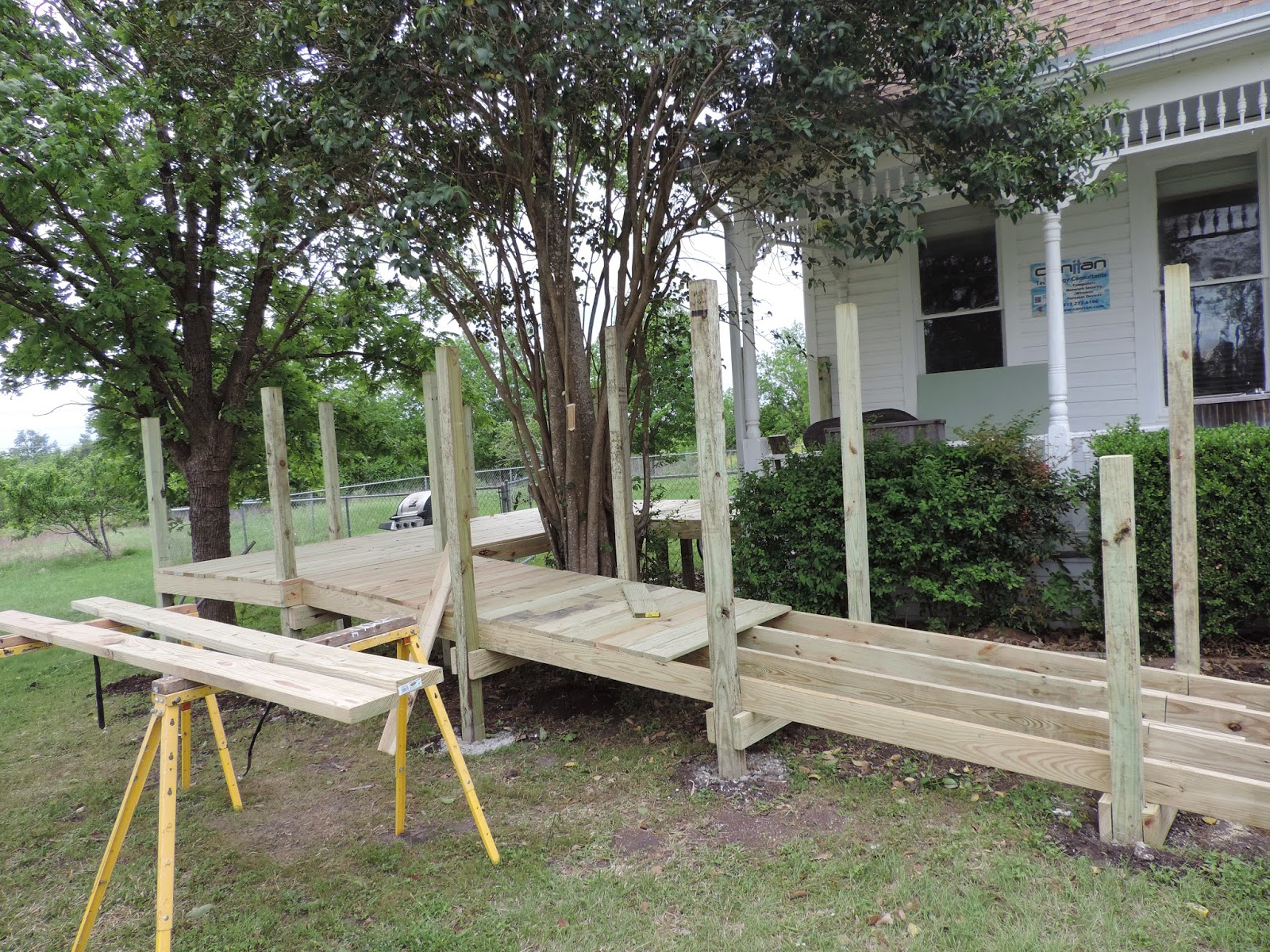 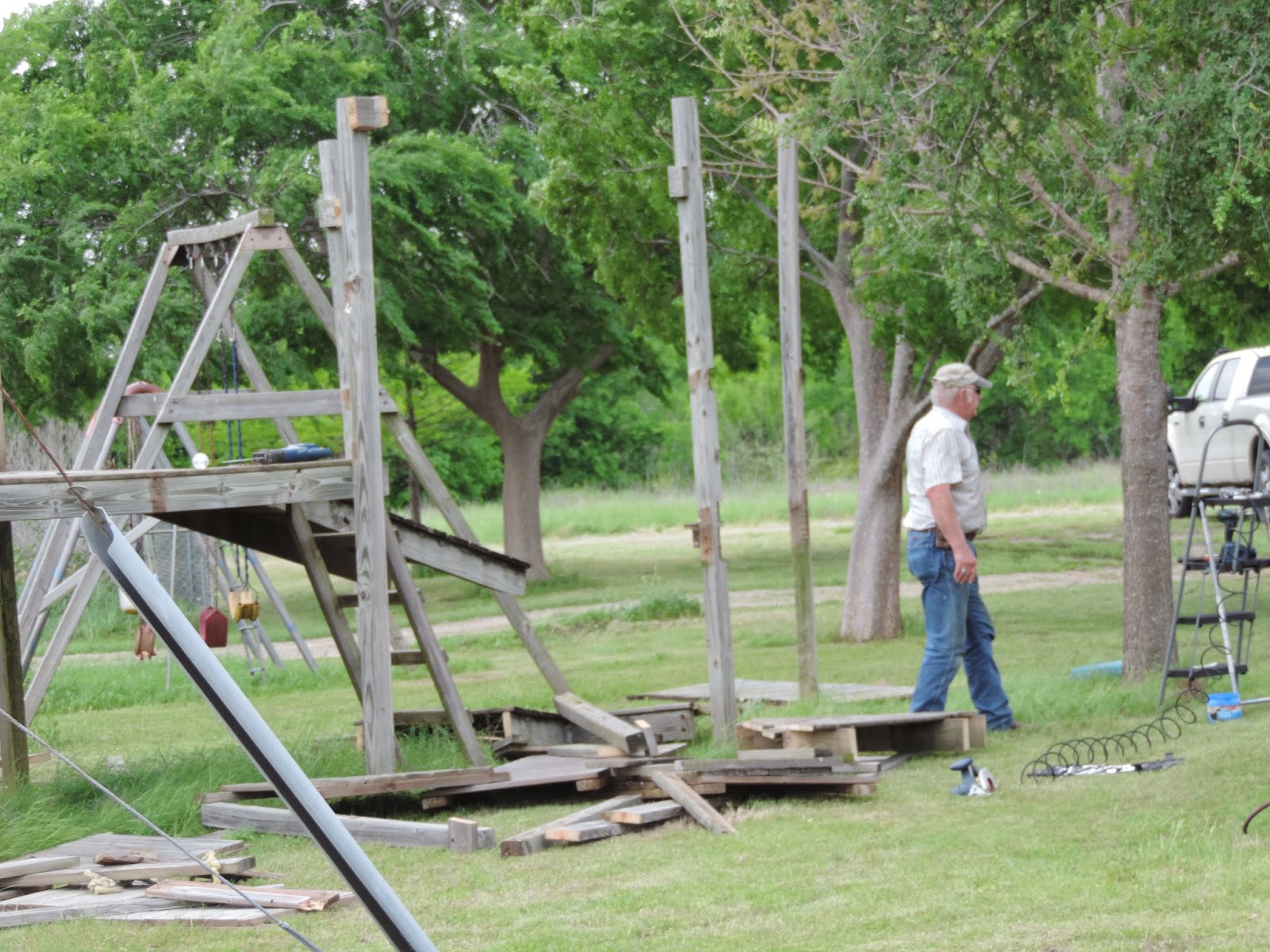 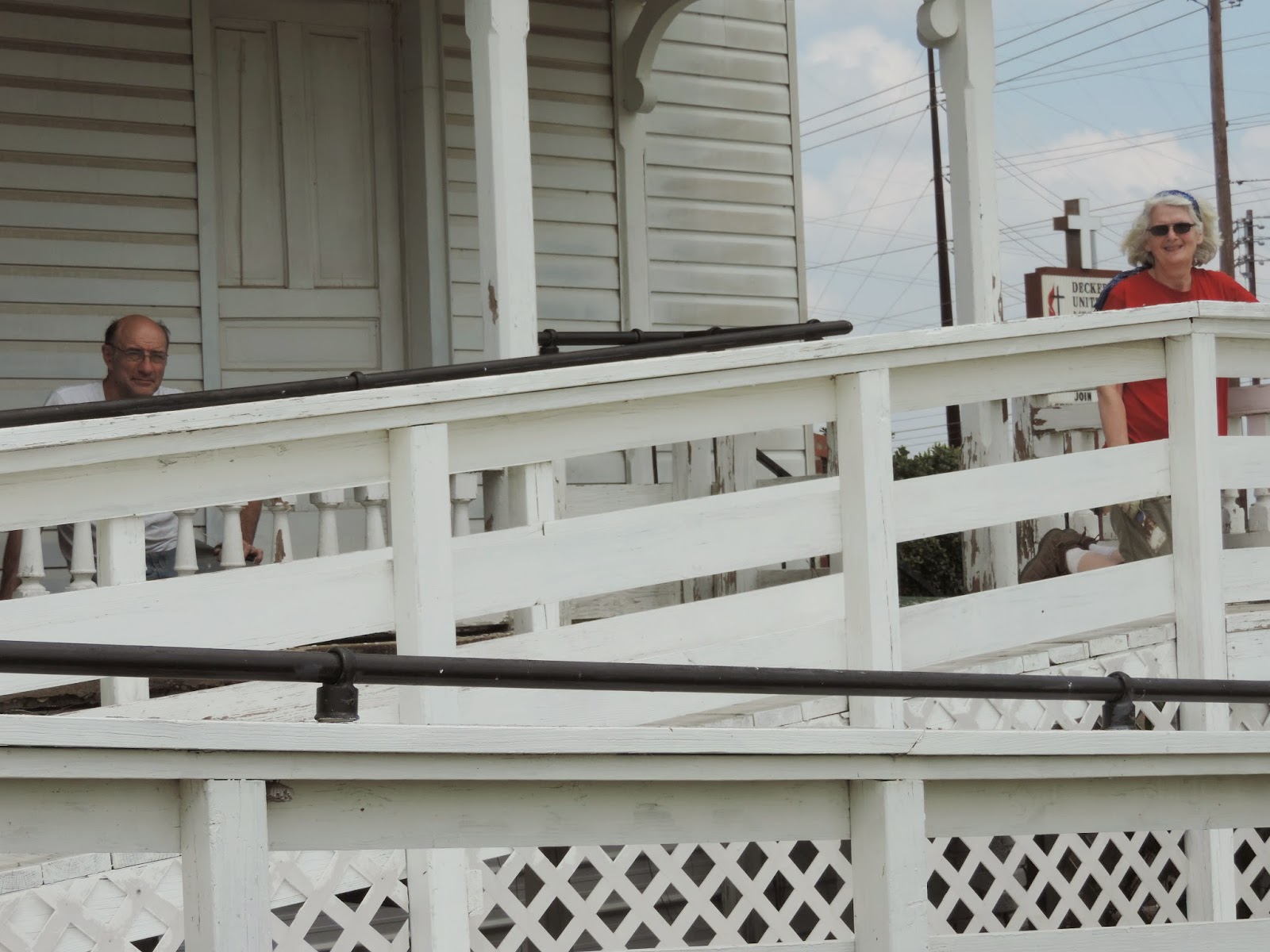 Did lots of minor repairs, including the changing out of a toilet seat 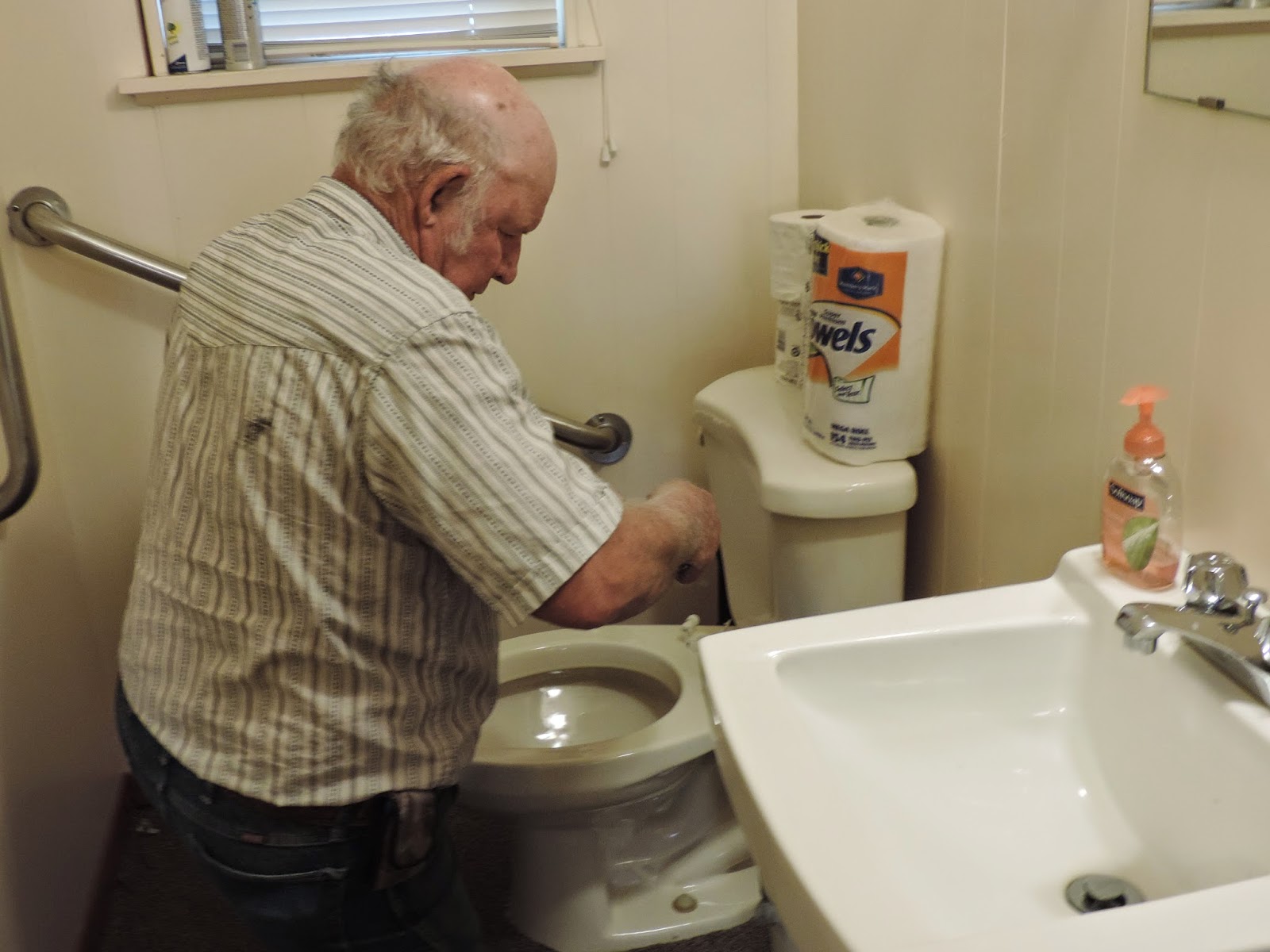 And a bit of landscaping 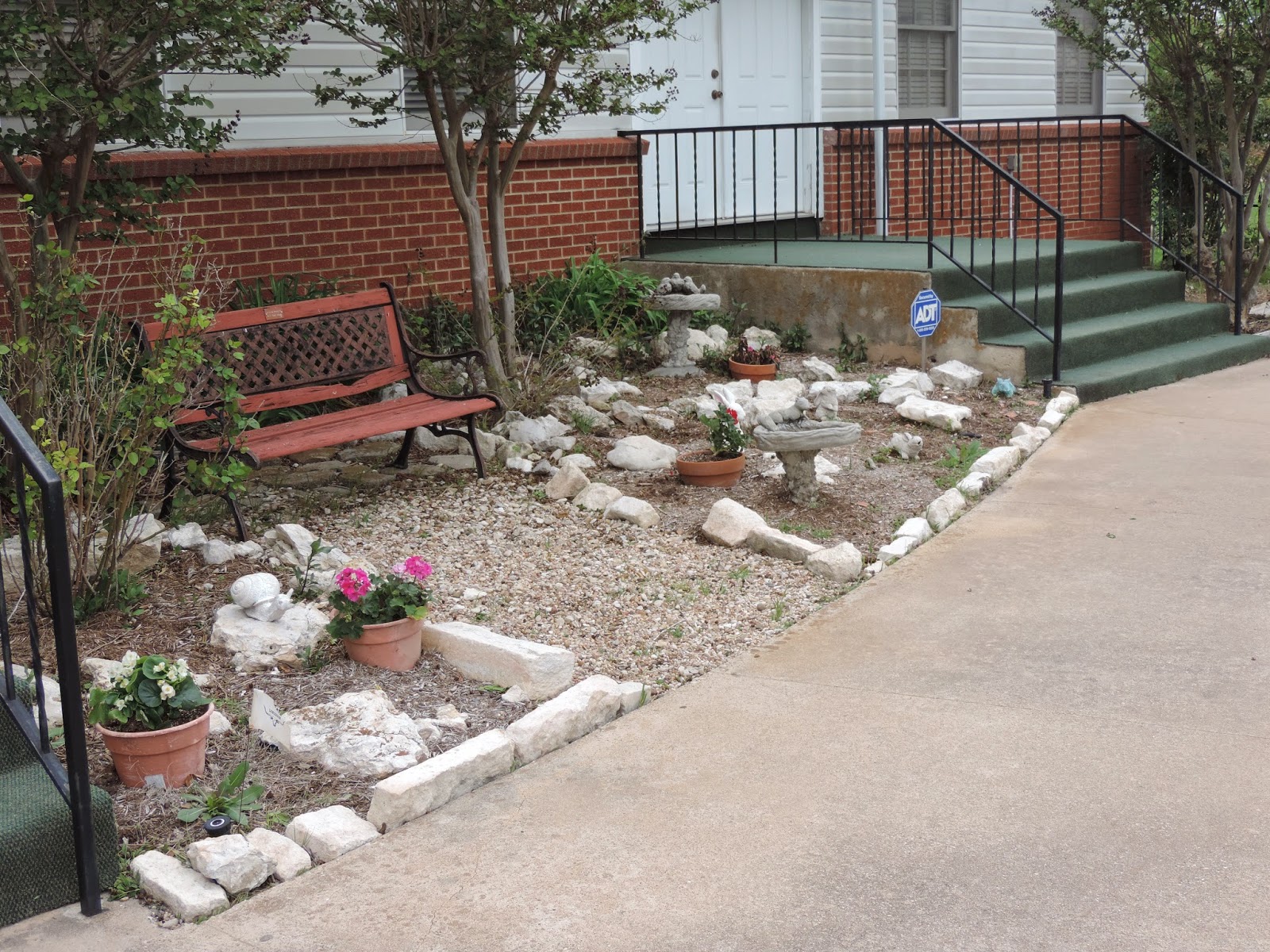 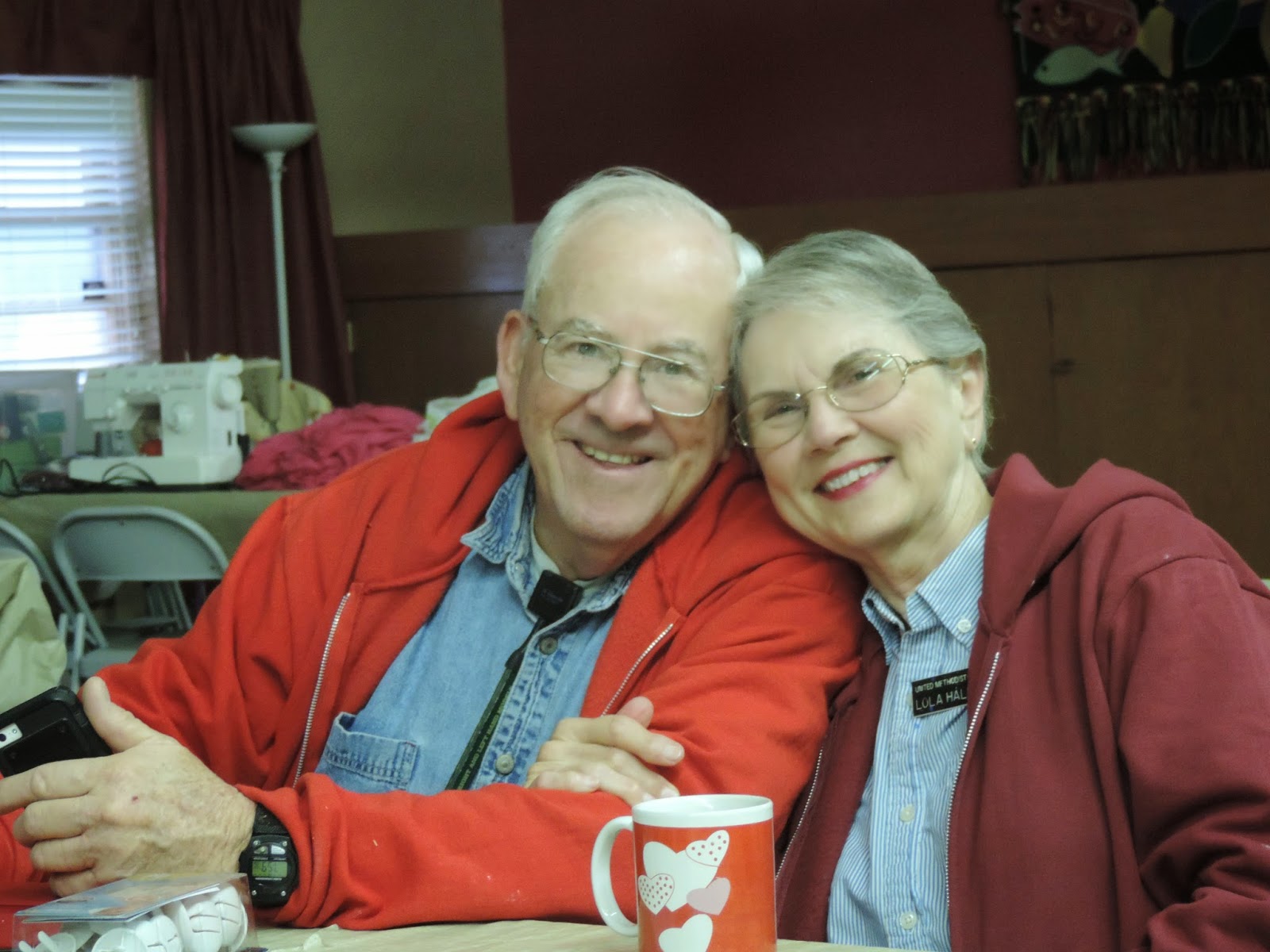 These generous folks provide us a site to park when in the area so we can visit with daughter D'Juana and her family.   On Saturday we drove down to Pearland where they live for a days visit.   Once again, Son-in-law Joe grilled some of the best steaks we've ever tasted.

On Sunday morning we hooked up and drove to Len's hometown of Vinton, LA where we are settled for the next few weeks visiting family and friends.  And a well needed rest.
Posted by Phyllis at 2:12 PM 4 comments:

We went for a drive and look what we visited......

We've completed our second week of work here at Decker UMC.  Today we decided to go for a drive.  Not knowing where to go Len pointed the truck east while I looked at a map.  EUREKA!  I know just the place to visit. 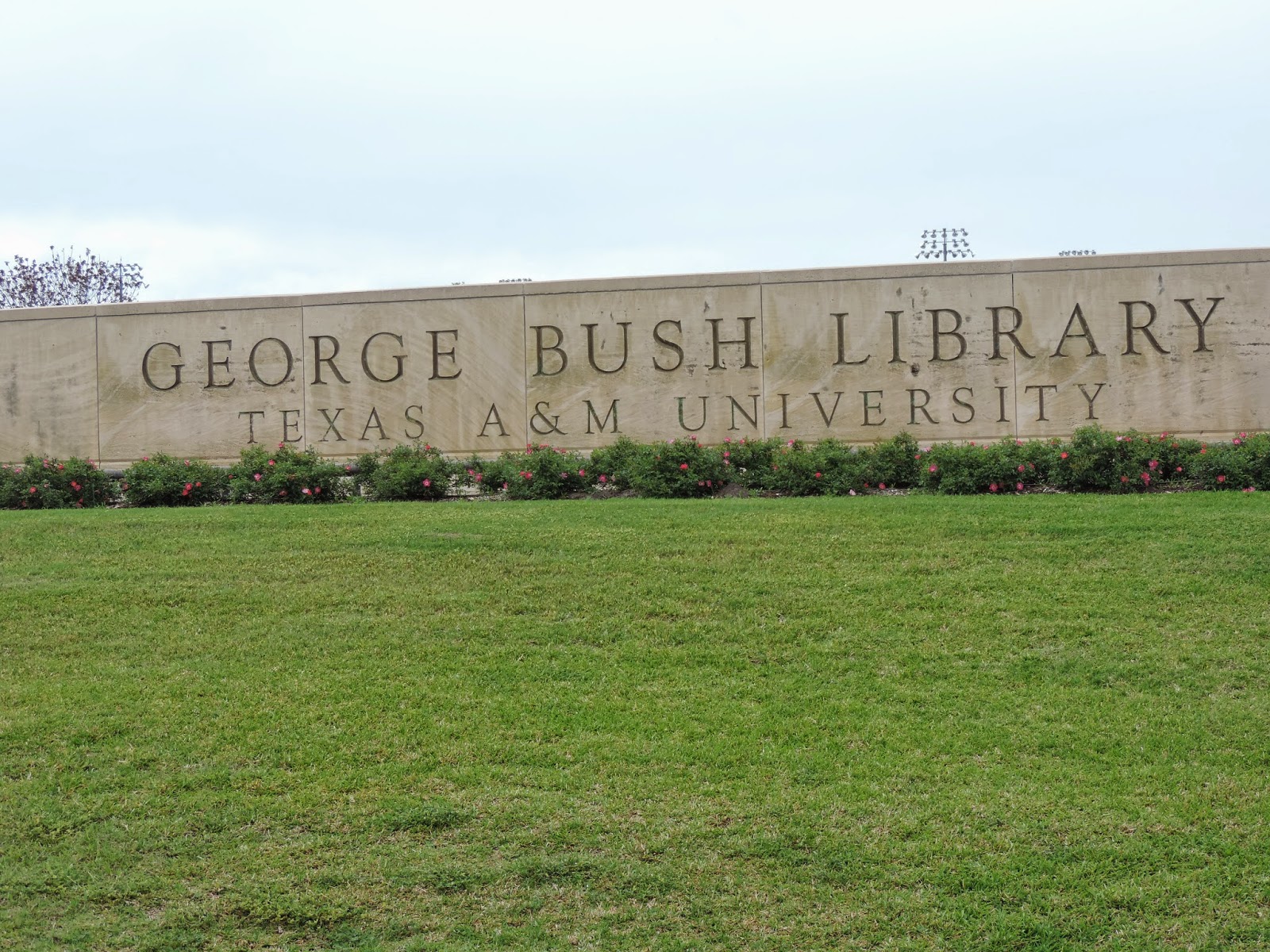 So from the Austin area we drove over to College Station, TX home of Texas A&M and the 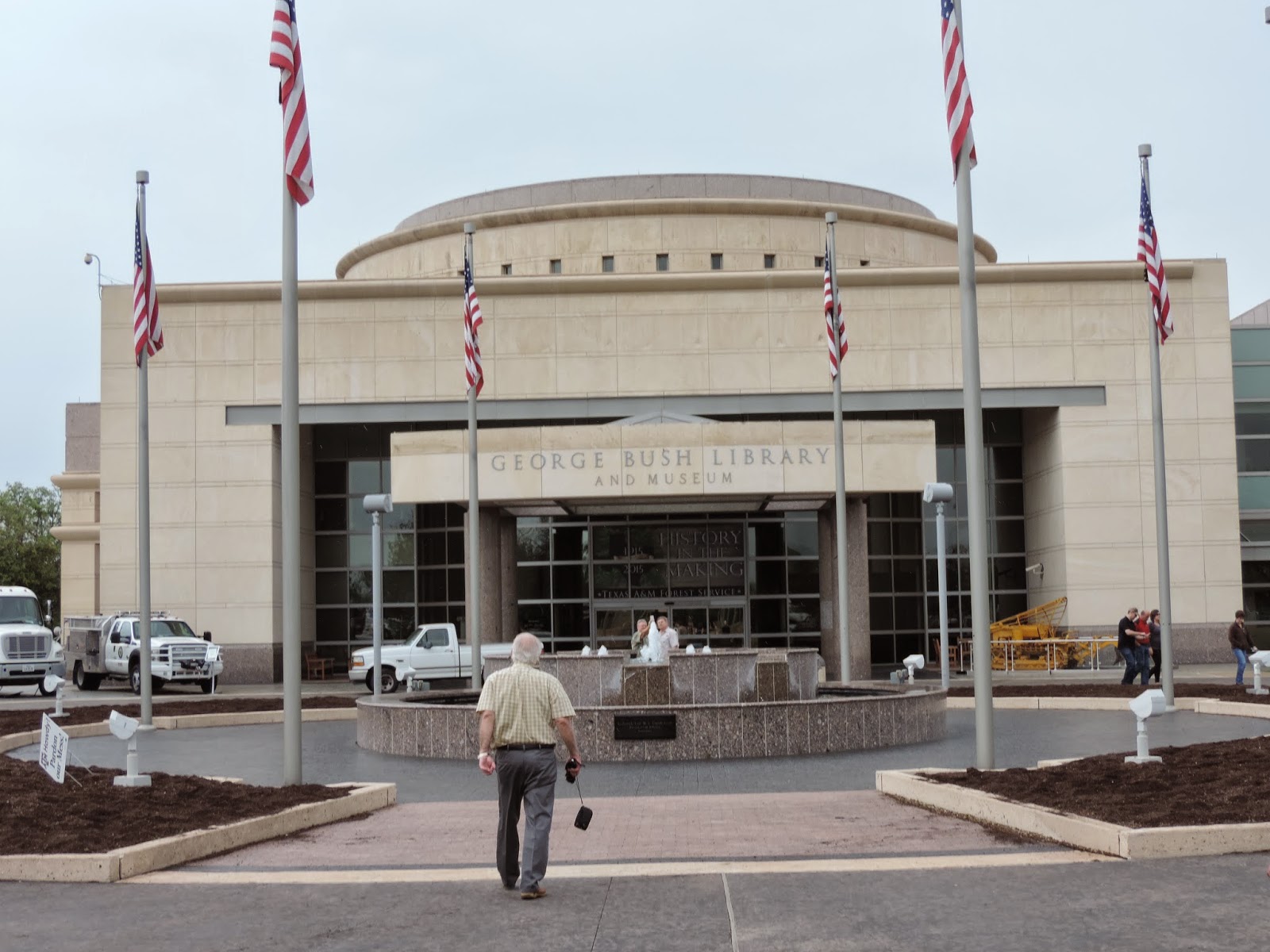 We've been to the Eisenhower Library and the Clinton Library.  By far this was our favorite.  It tells the story of George H W Bush and his wife Barbara.

Several years ago at the annual conference of Society for Human Resource Management, Barbara Bush was one of our featured speakers.  She was so down-to-earth and funny as she relayed tales of their time in the White House.   And of course she was wearing her pearls.

I've been seeing interviews this past week with an author of a recent book about the Presidential families. Her source was several past and one present personal staff who served the President and his families in their private quarters.  She relates that George and Barbara were most everyone's favorite. They would invite the staff to eat meals with them.  George would find a staff member to play horseshoes with him.   They treated them all as equals and part of the family.

While living in the White House the Bushes would go to Camp David for Christmas instead of their home in Maine.  By doing so, this allowed most of the staff and secret service to spend Christmas with their own families.

This was his Presidential limo: 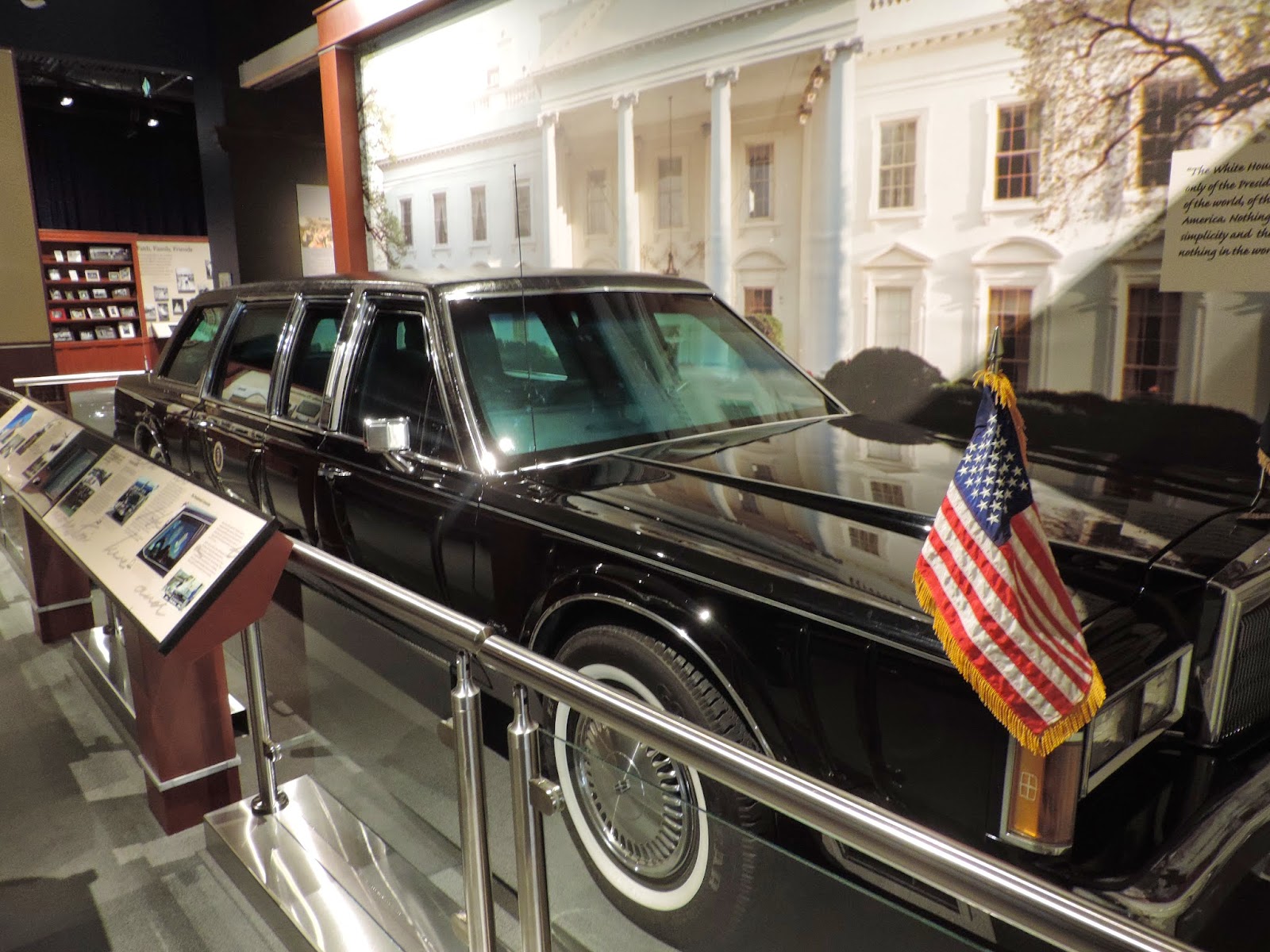 The bullet proof windows are as thick as a phone book.  The tires are bullet proof.  There is a separate, backup air system in the car.

This is a picture that was taken in the Presidents oval office.    The President needed some important advice on policy and asked this gentleman to call him privately from the Presidential phone. 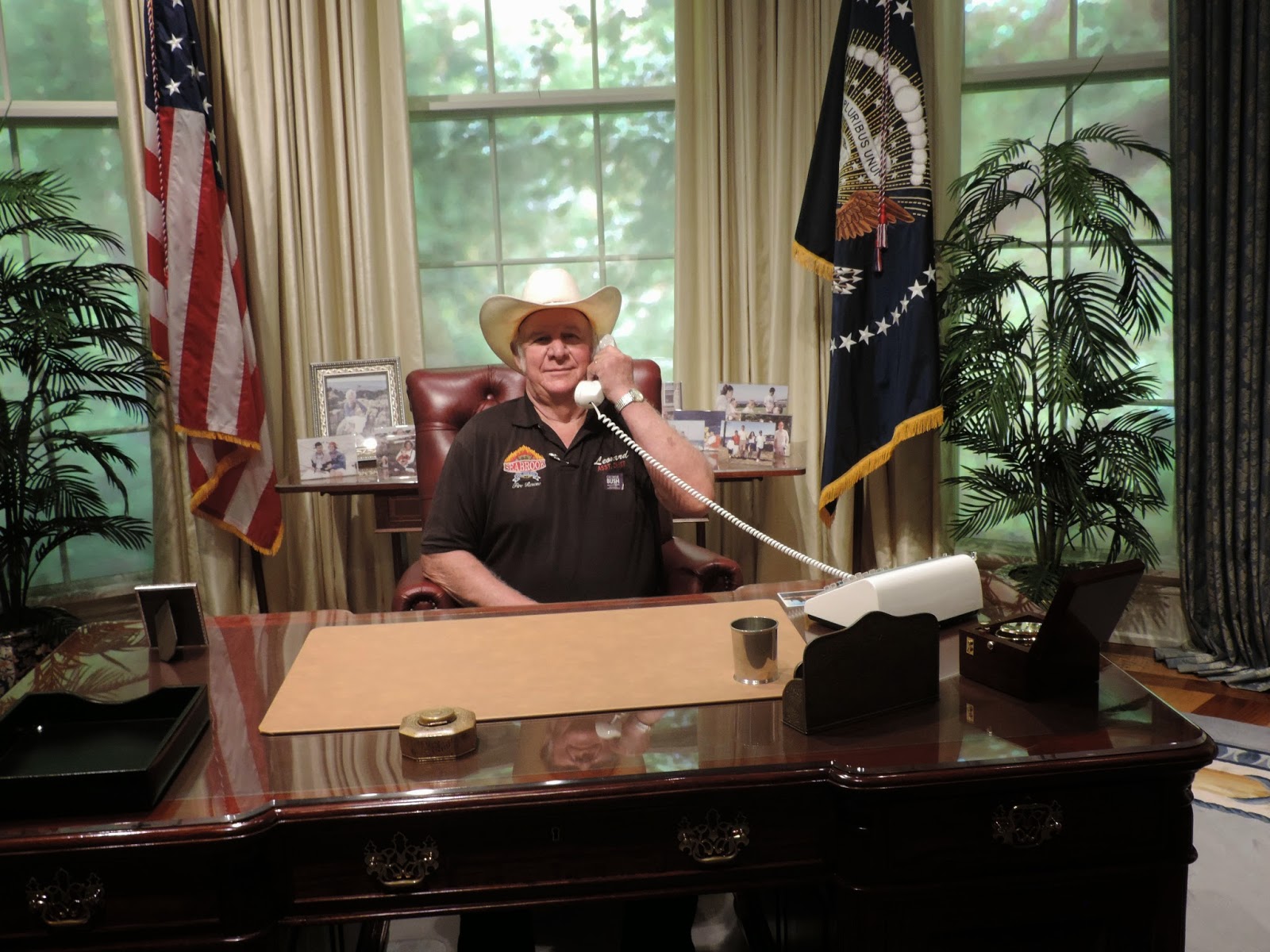 On display is a section of the Berlin Wall.  Look at the contrast.   On the wall facing West Berlin are written slogans and messages. 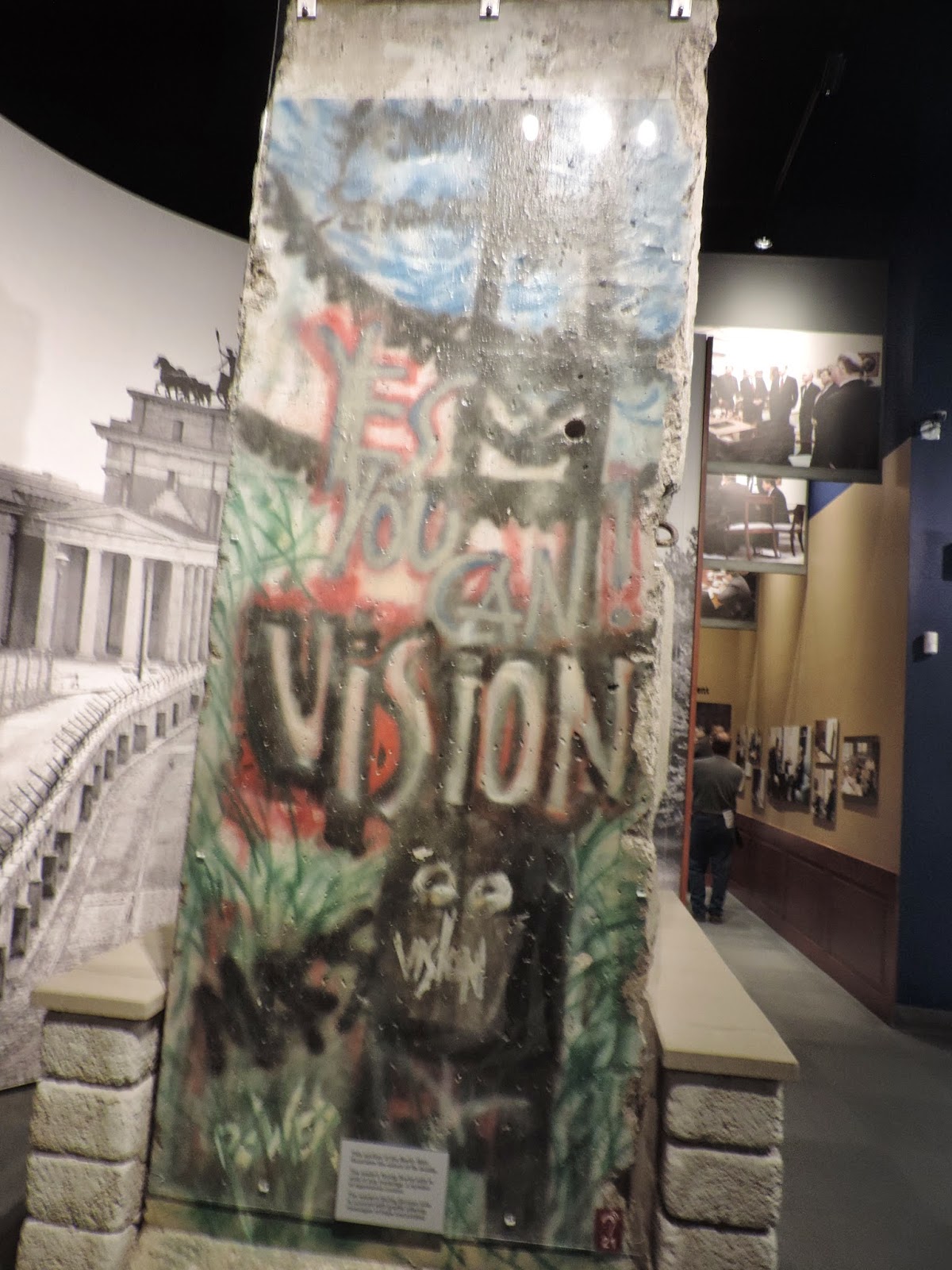 The side facing East Berlin is barren and bleak,  just like the town it faced. 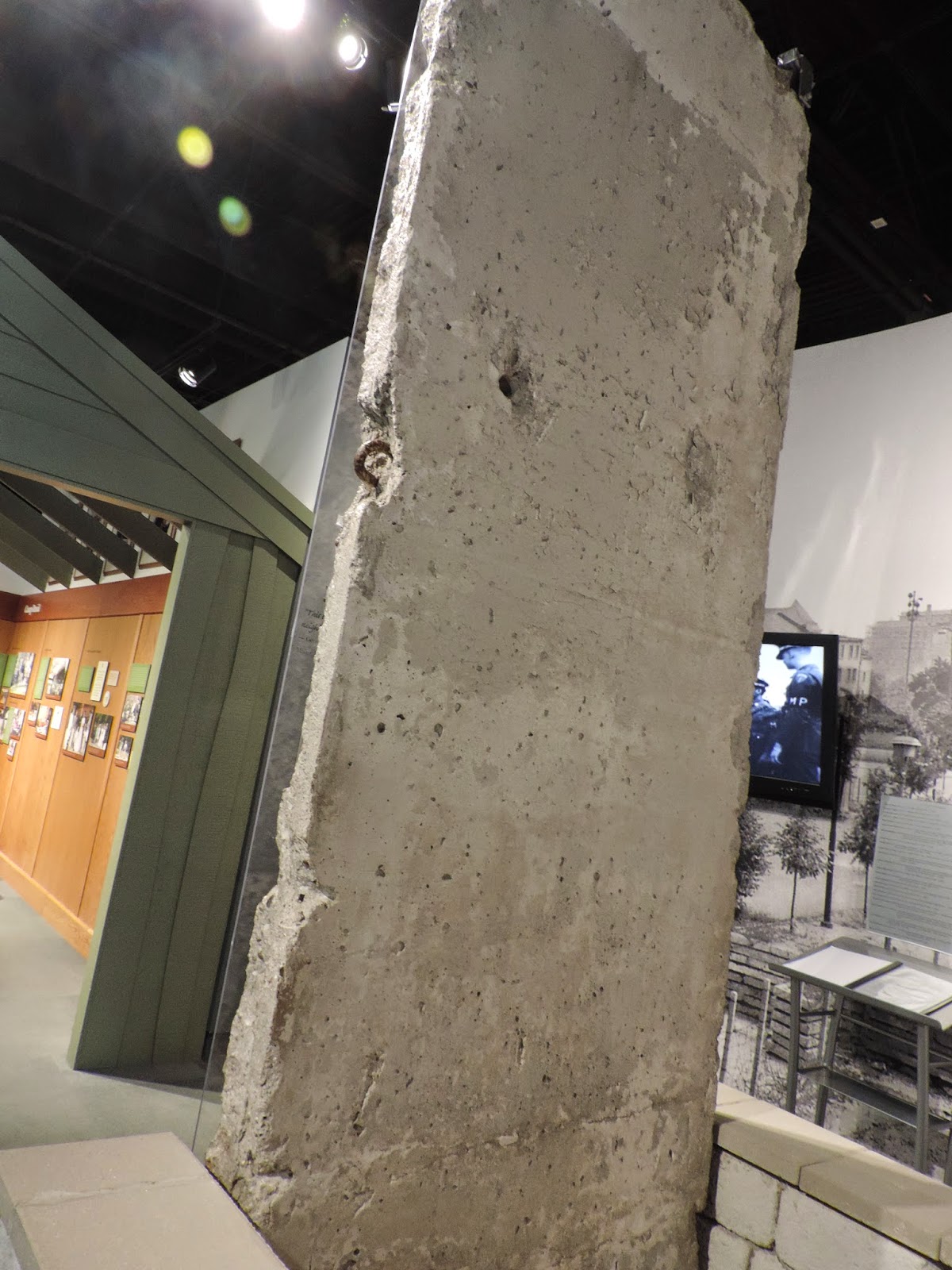 A replica of the situation  room where many hard decisions were made. 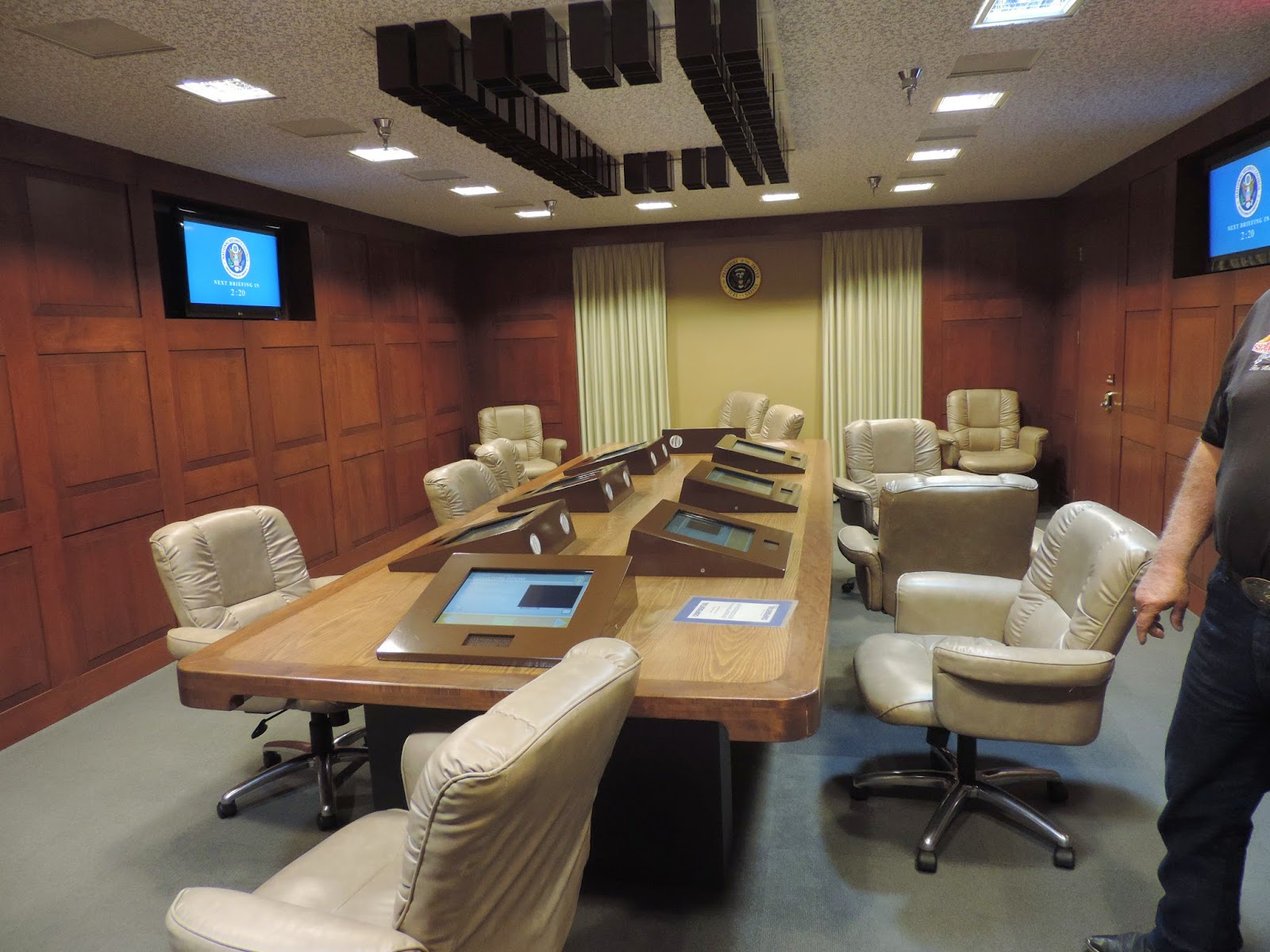 There is a theater room that shows a short history of the Presidency of George H W Bush every half hour.   Well worth seeing.

To LBJ on our day off.

Having three days off after 4 days of work, we invited our co-workers Andrew and Joanne to come sight seeing with us. 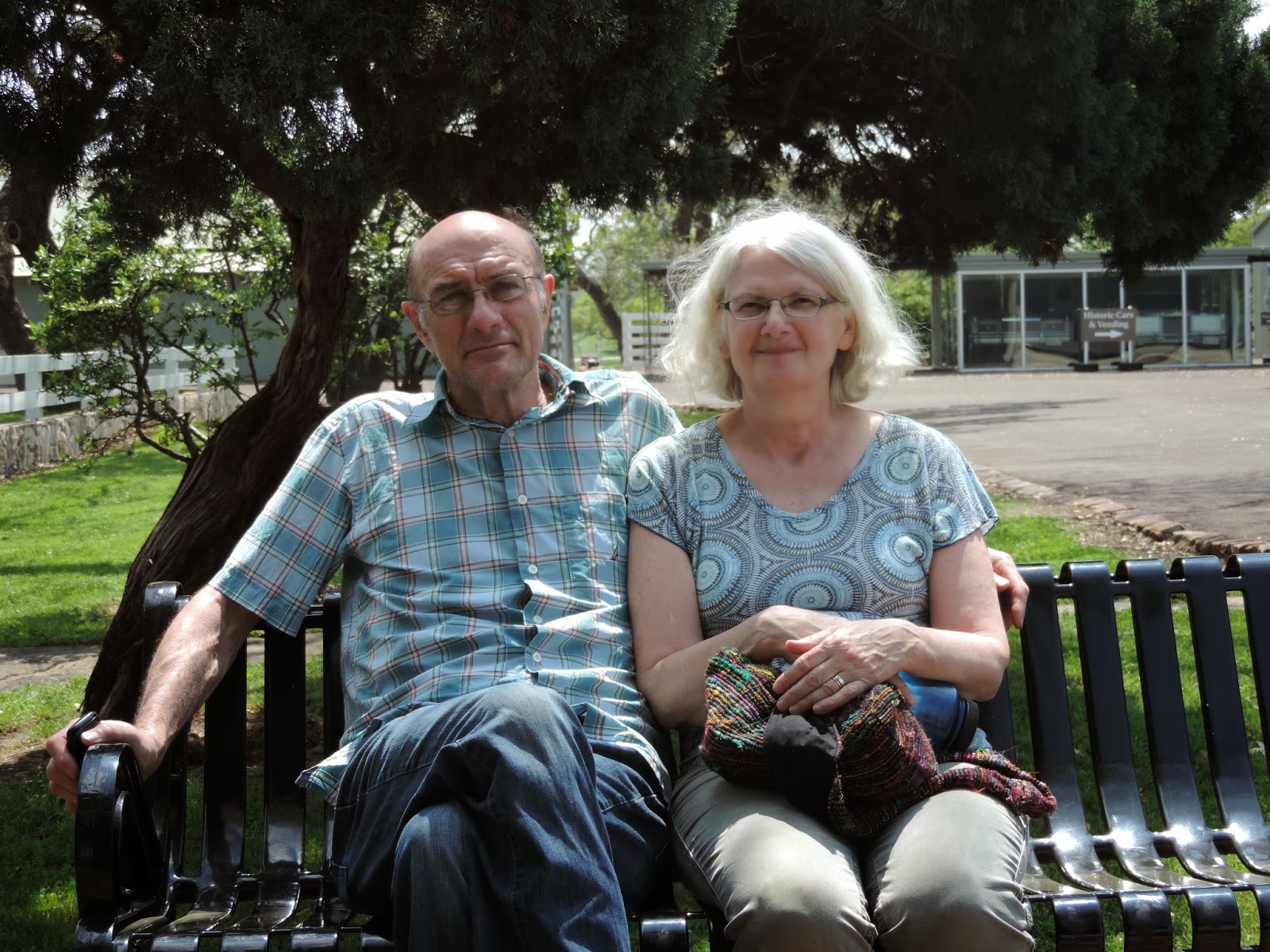 It was a pleasant day to tour the LBJ Ranch.  Not too hot, not too cold.  We have been there twice but this was Joanne and Andrews first visit.   There is always something new to see.  We had never toured the "Texas White House" before.  Unfortunately no picture talking permitted inside

The Ranch is about 70 miles from Decker UMC.  We are on the far east side of town, the route took us west through the city.   The State Capital 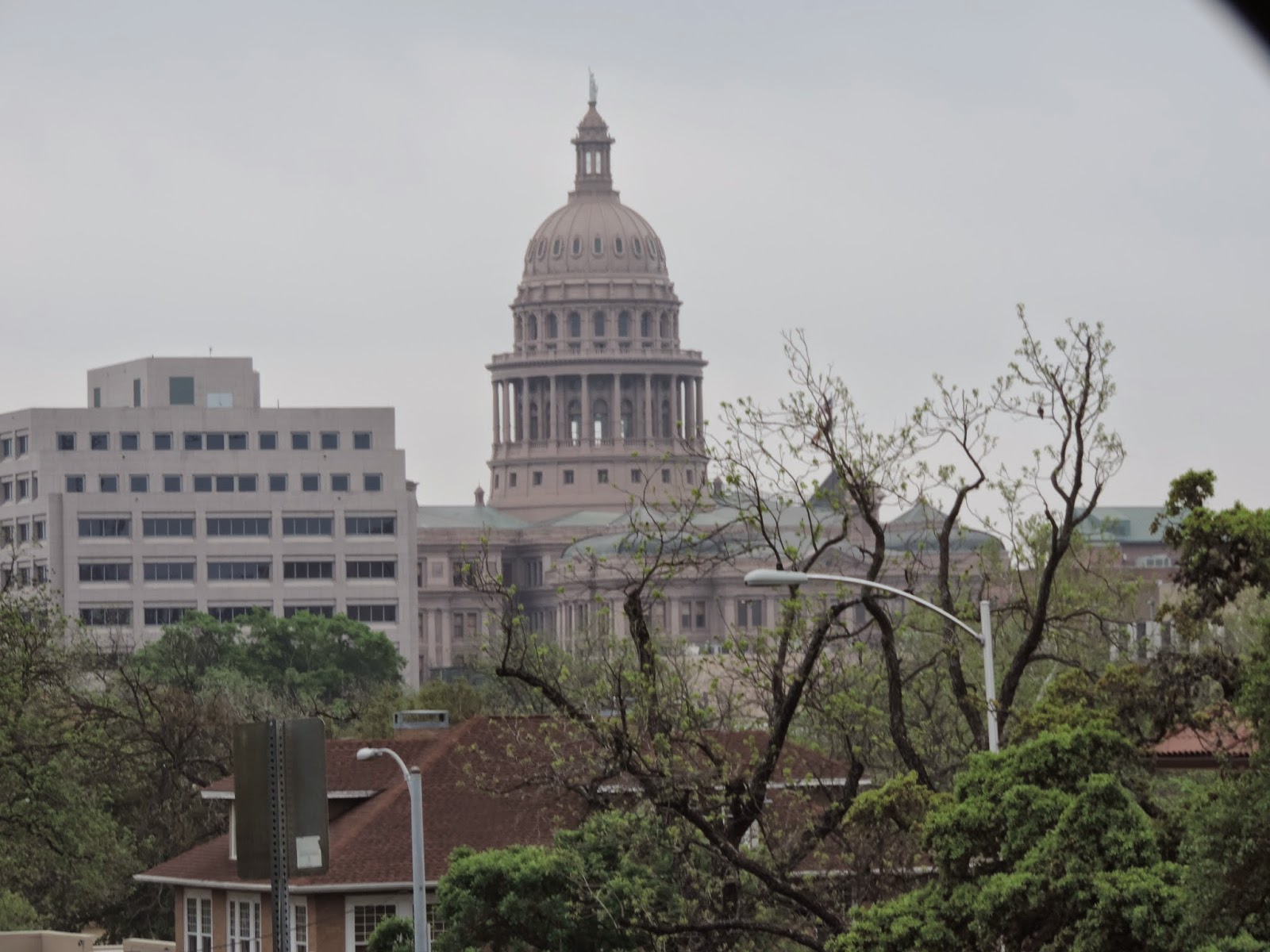 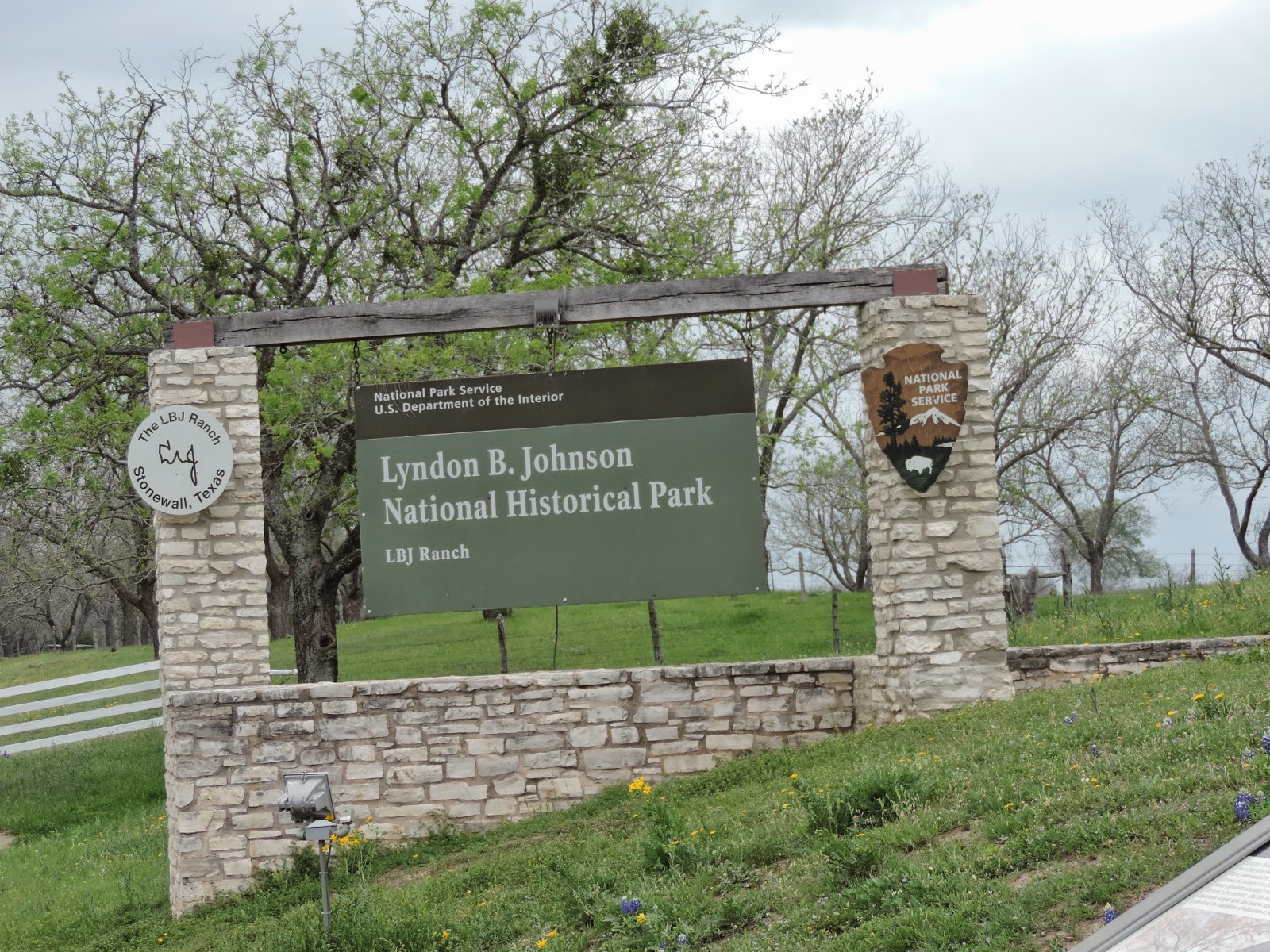 Reconstructed home in which Johnson was born.   Filled with original furnishings. 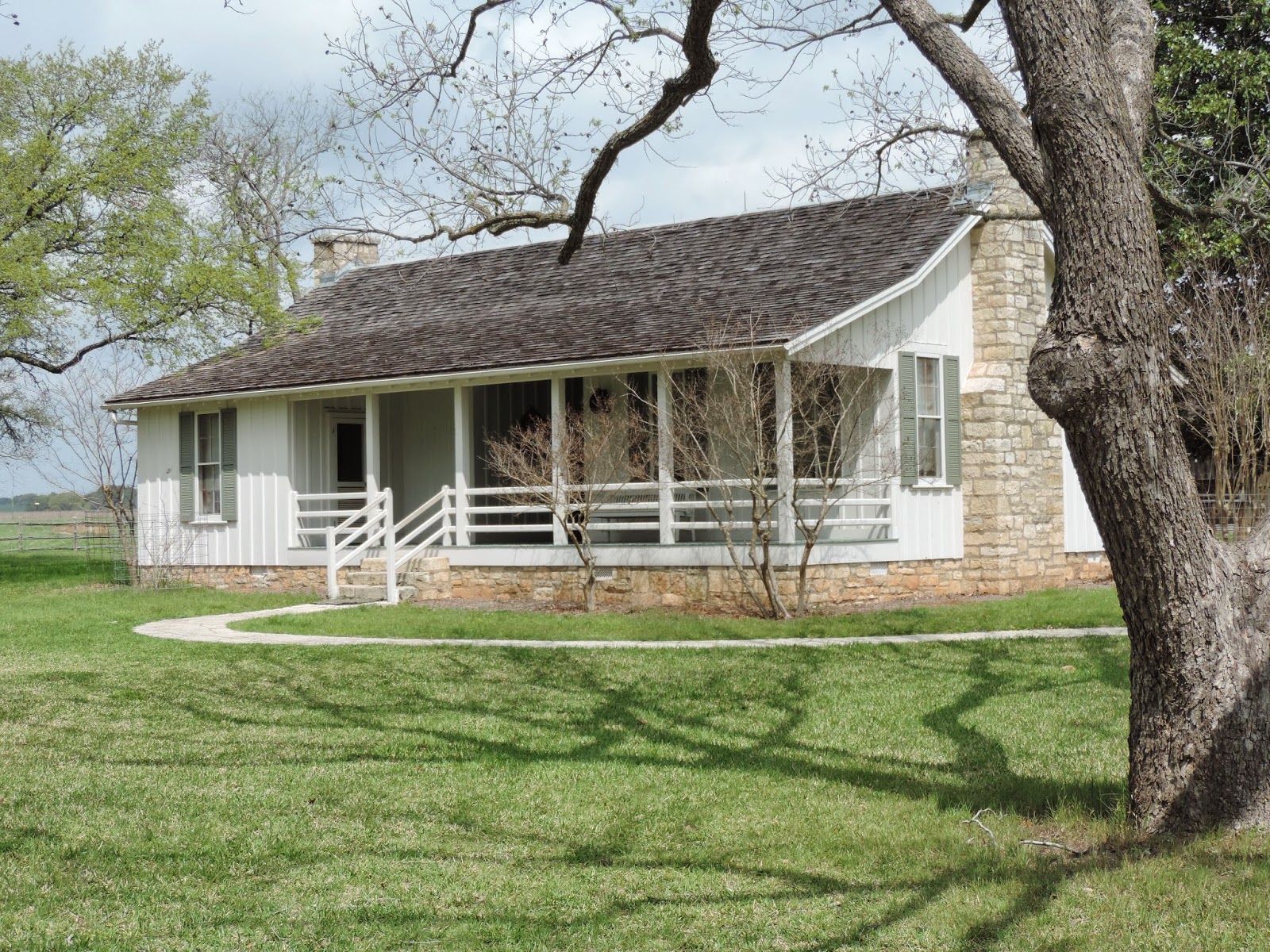 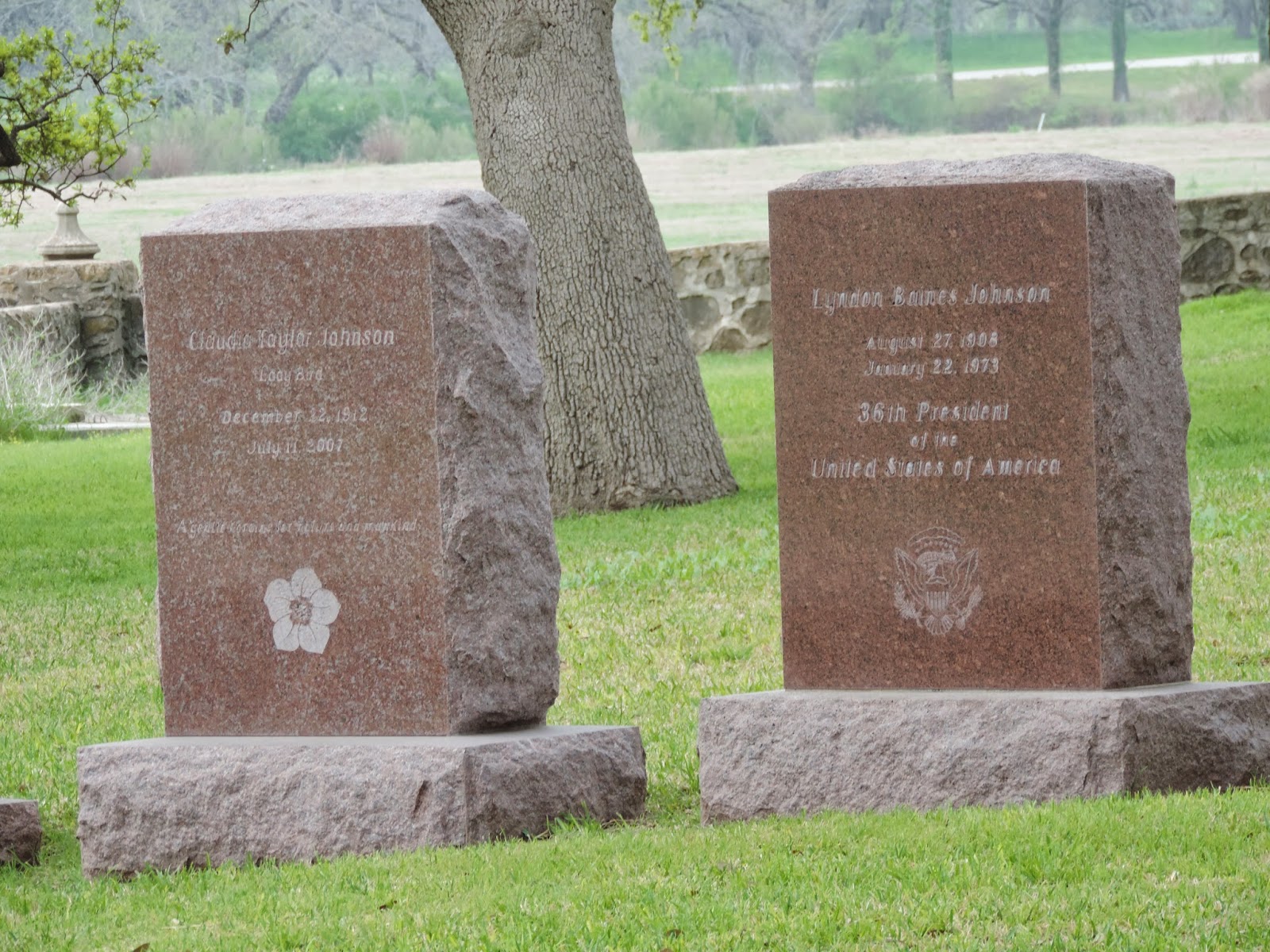 Traffic jam on the ranch 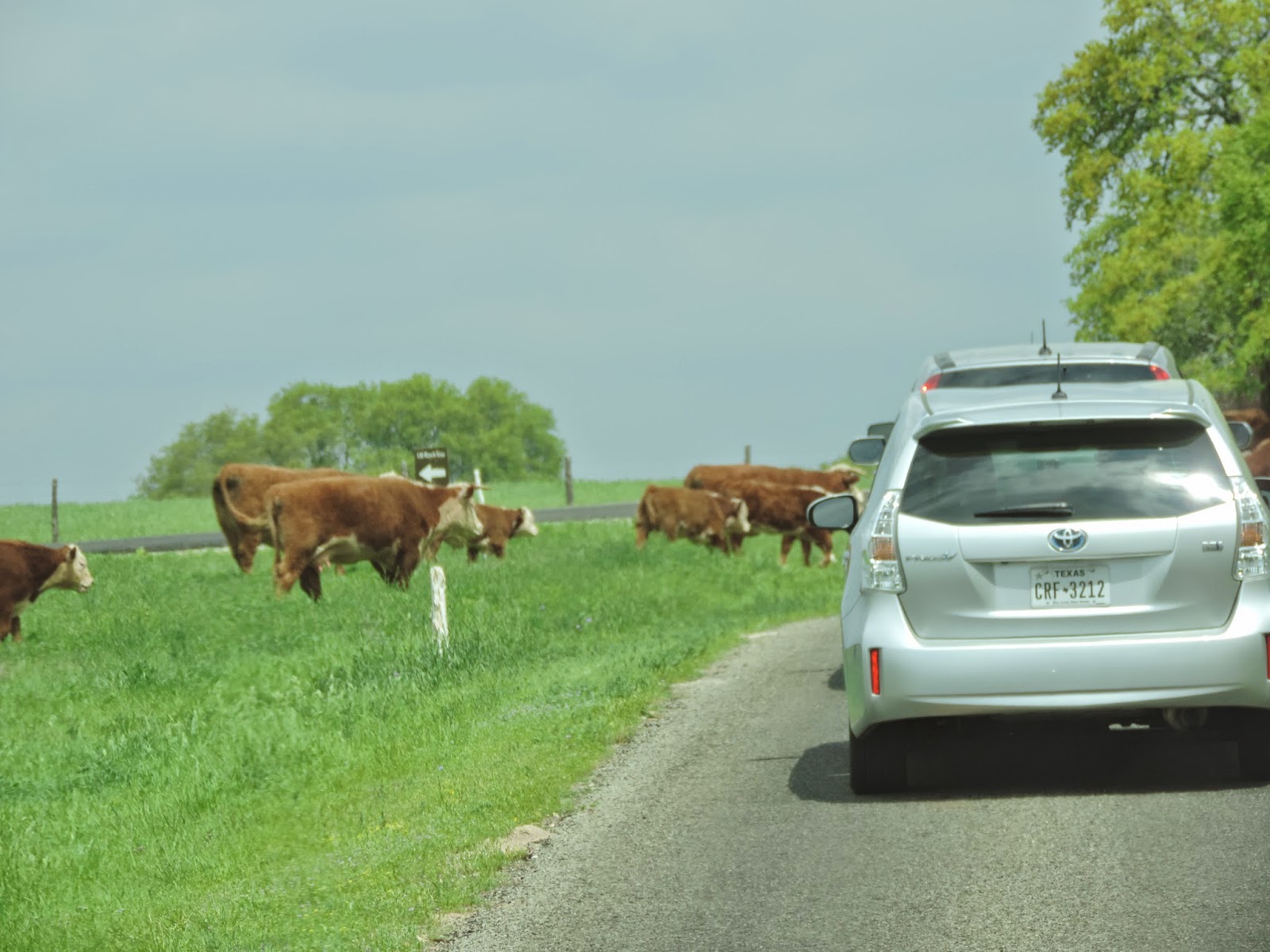 This beauty asked to come home with me.  I was tempted but too many Rangers around and she kept wiggling under my shirt. 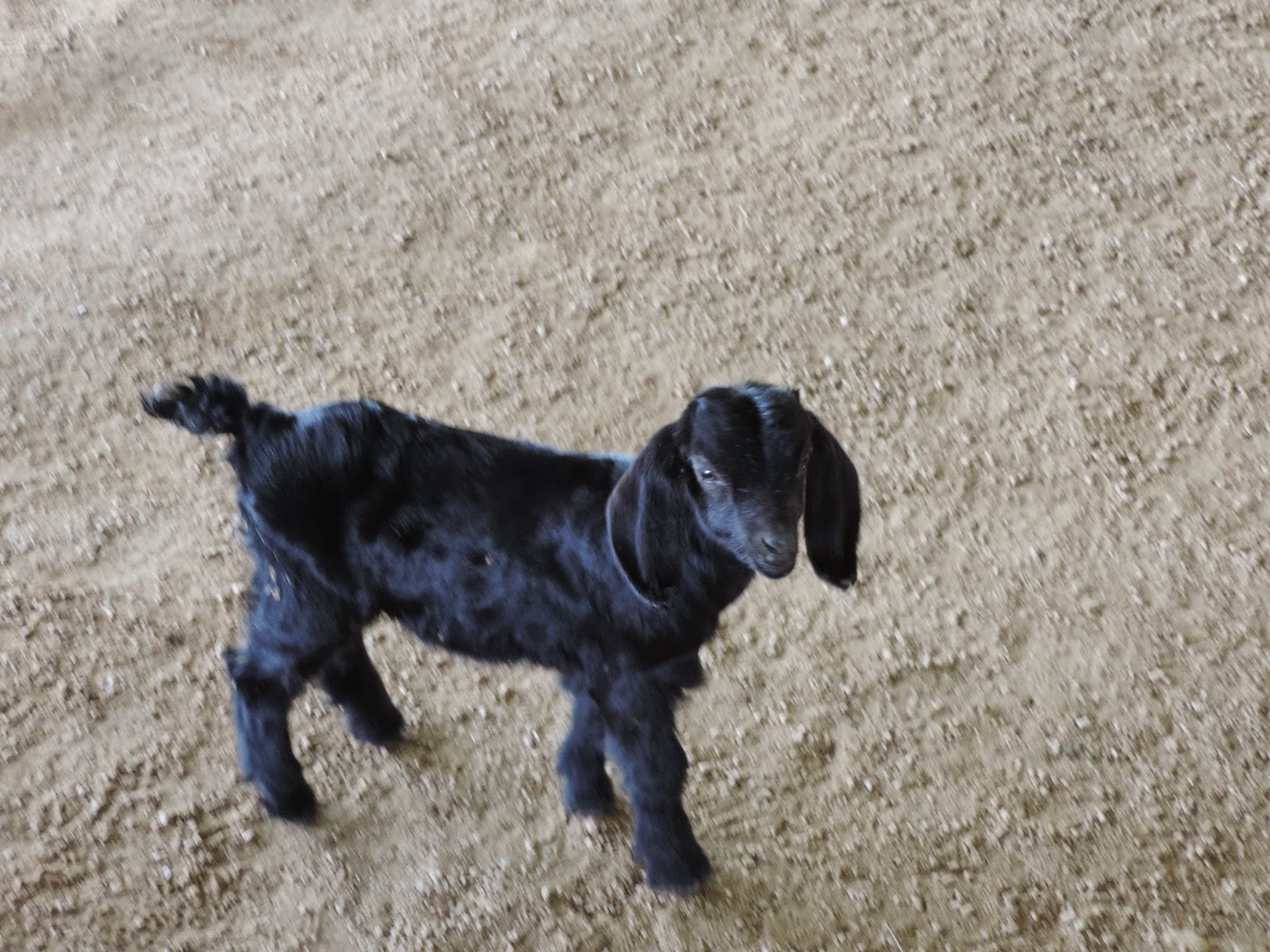 Another beauty.  The President loved this car and enjoyed taking visitors a tour of the Ranch. 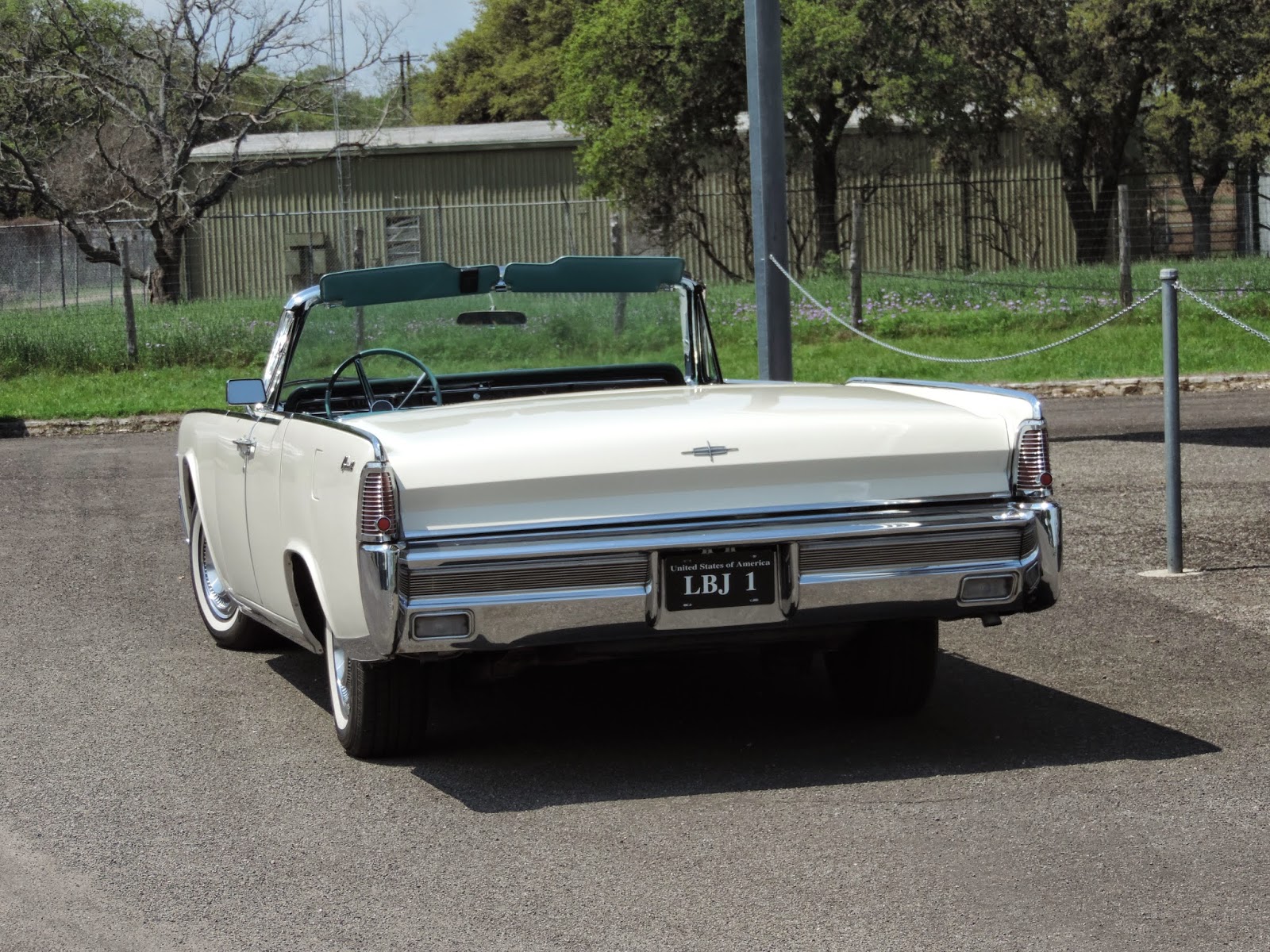 The ranch has a landing strip but it is not big enough for the usual Presidential aircraft.  So this is what he called Air Force One Half. 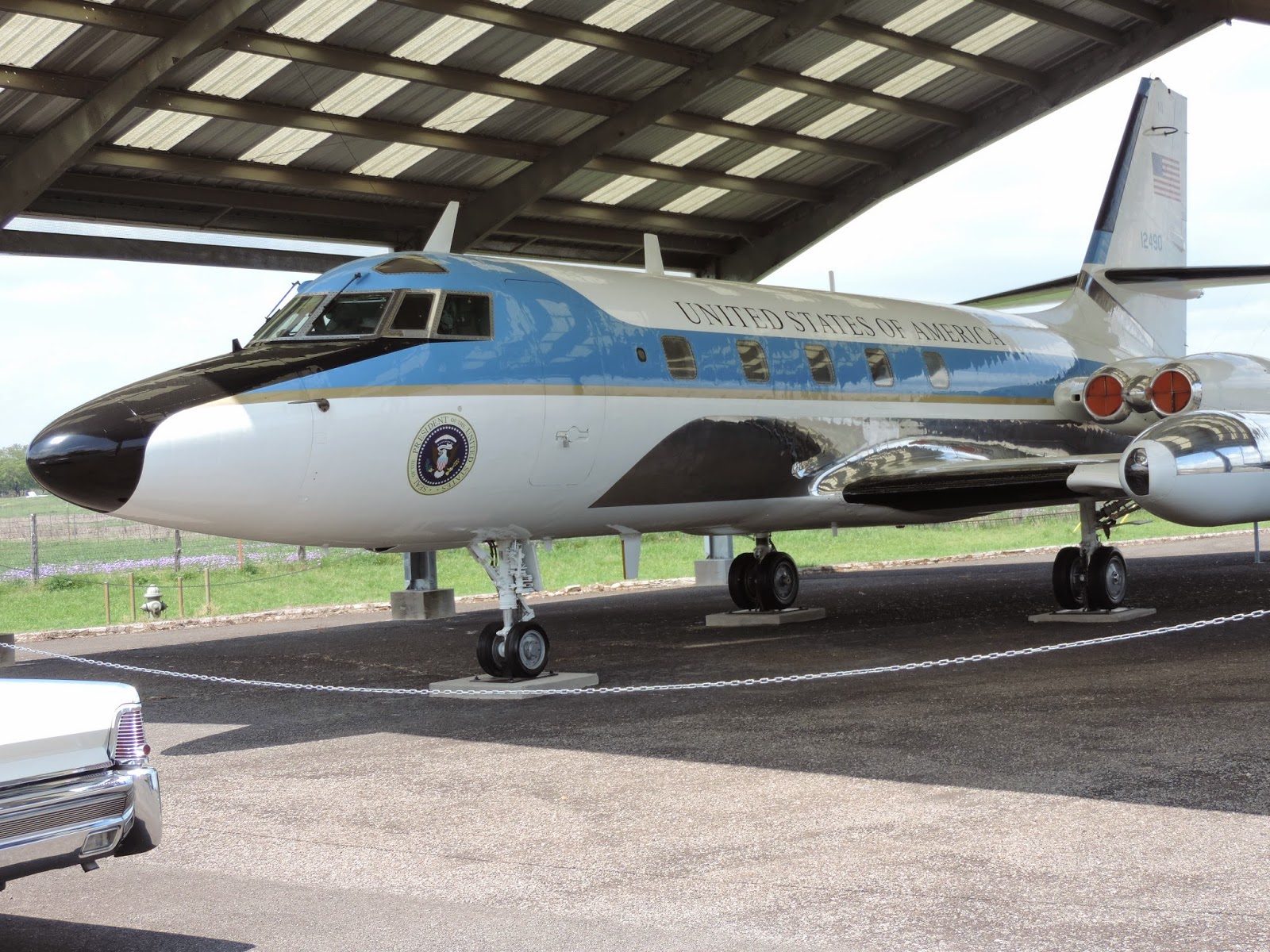 After our tour of the house, we drove back to Johnson City and stopped for lunch at a quaint cafe where we had eaten in the past.  Just as good as we remember.

Wishing each of you a Blessed Easter.
Posted by Phyllis at 8:20 AM 5 comments: