What happens with snow, ice or wind

I am always amused with what they consider a snow storm in Alabama.   This is last weeks blizzard. 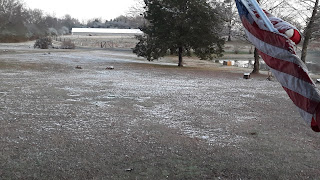 School cancelled.    They are not prepared to handle the ice that lays on the overpasses, etc.

I guess neither am I.   When the temps sink, we get ice on all three sets on steps leading down from front porch and back porch.    This is the front porch on the day we had snow. 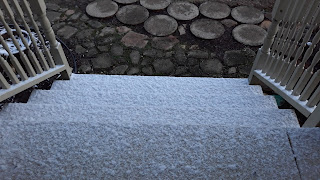 A few days later, December 12,  all steps were iced over.   I just didn't realize how much.  As is my usual practice I feed the ducks in the morning.     When the ducks see me on the front porch they run to greet me.  OK..... it's not me they are glad to see, it is the feed.    On this morning I saw the bottom couple of steps looked icy.  My plan was to go down ONE step.   I stepped down, my feet went out from under me and I did two complete flips landing on the concrete stepping stones at the bottom.  My head slammed against one of them.   Blood everywhere from my nose.

I dragged myself inside and got cleaned up as we were leaving for Louisiana a short time later.  I hurt a bit that night.   I had large bruises on my left leg.   And I had a large knot on the side of my head.  Surprisingly I did not hurt much the next day.   The knot on my head has gotten a bit smaller but still is tender when I touch it.  So, okay... don't touch it.

We went to Louisiana  with no issues.   Well, not exactly.   We got packed to go and our new-to-us car battery was dead.   Our dear neighbor jumped it off and off we went.   We stopped in Meridian, MS at a Ford dealer.  They said the battery was not a problem.

I had booked us at the Quality Inn in Laurel, MS, about the half way point.   The sweet woman at the desk asked me how I was.  I told her about falling that morning.   She said she was moving us to a room where we would be parked by the door instead of having to walk through a courtyard.  Everything was fine.  Until 2 am when the door opens, a woman looks in and backs out quickly.

In the morning I go to the breakfast area.  A man sees me and points to the desk clerk and says "She's the culprit"   She comes from behind the desk and hugs me and apologizes.  She said she thought that room was empty until another guest walked in and saw us.

Then we go to the car.   Dead battery.   The man who spoke to me earlier came and got us started.  Nice people.

When we got to Sulphur, LA we went to the Ford dealer.  Yea, we needed a battery.  We only got the car two weeks before but it is 3 years old and has been sitting in a garage most of the time.  Understandable.

We spent 3 nights at Len's brother and SIL, Royce and Susie.   They always treat us well.  Fried shrimp and catfish on Friday, turkey on Sunday.   Saturday was East family Christmas party at sister and BIL Sissy and Davids house in Orange, TX.

This is daughter D'Juana and grandchildren Lindsey, Jared and Alex.  They drove in from Pearland, TX.   SIL Joe could not make it.  This week he is really busy.   He is the Head Band Director of Pearland HS.   20 HS bands from around the world are invited to march in the Rose Bowl.  The 350 members of Pearland HS is one of them this year.   We are rightfully proud of Joe. 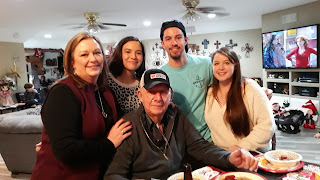 We left Sulphur on Monday December 16.  We drove again to overnight at the Quality Inn in Laurel, MS.  Waiting for our arrival was Priscilla, the original lady who checked us in a few days earlier.  She apologized for the interruption in the middle of the night.  She neglected to change our movement in their system causing her replacement to give our room to other people.    Then she handed me a card and a gift bag containing these items.  Mugs for Len and me and a toy for Biscuit. 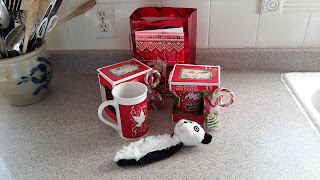 Around 6 pm we got an alert on our phone for a Tornado warning.    It was dark but everything looked fine outside.  Then we heard a roar.   I knew what that meant.   Len said he felt the bed shake before we heard the roar.   Biscuit was running in circles.   He got him and we  went to the large bathroom area.   It only lasted a few seconds.

Then sirens, crashing, and stillness.   We looked outside.  Metal and insulation lay in the parking lot.  The car parked next to us had a window broken out.  Another car down the parking lot lost windows.
This car did not fare well either. 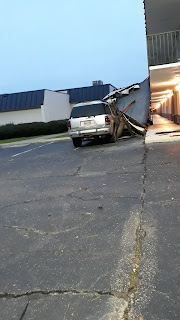 Cars across the road were heavily damaged.   Buildings nearby had damage.  Debris everywhere. 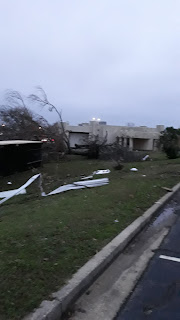 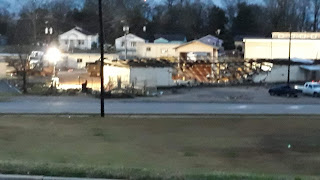 Electricity was out from the time the tornado hit until about 2 am.   I understand that other parts of town were much heavier damaged.   Daughter Terri said it was on the news in PA.

We got home yesterday about noon.  We are packed to leave tomorrow morning for PA, MD.   Wonder what this trip will hold.

Until next time.
Posted by Phyllis at 4:56 PM 4 comments:

Are you like me?   Do you have things THAT HAVE TO BE DONE but you put it off and it is always in the back of your mind?    And then when it's finally done you think.... WHEW!

It's that time of the year for us old(er) people.   Do we change supplemental insurance plans? what about Prescription Part D of Medicare?  Do I keep what I have?   For the last few years our Prescription Part D is the WalMart plan.  Perfect as we full-timed.  Every where has a WalMart.  And the cost was reasonable.   This year when we got our renewals....wow.   An increase from about $28 a month to $56.  Time to start looking around.

I went online to the Humana site and the Medicare site.  It was all confusing.  To add to the dilemma is the medication now prescribed for Leonard.   The cost is $20,000 a month.  We were notified that Humana accepted it as a Tier 5 medication.  It means that  our cost would still be $2,000 a month.  We were told since he has a rare ailment there was a Foundation where we could apply.  They will pay the cost.   So. We didn't want to mess with changing his plan.   I finally called Humana and talked to an agent.   Leonard remains on the $56 a month Premiere Walmart plan.  Due to the few meds I take I am moved to a Walmart plan at a cost of under $14.00 a month.   Now that is off my mind of things to do.

We know we can no longer keep the RV.  Leonard can go longer assist in setting up or taking down. 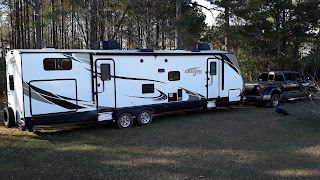 We made a deal with the dealer from which we purchased it.   We hooked it up Saturday and off we went with it yesterday.  The dealer is about 40 miles away.   We get on the road and realize we did not bring the title with us.   So we knew we would have to make a return trip.  Normally Leonard always checks the tires before we get on the road.  He didn't this time.   We get about half way there and he can feel the rig pulling to the left.  He pulls over, I get out and check tires.   The rear right tire is low.  We find a station about a mile up the Interstate.  Pull in.... it's closed.  Another one about 4 more miles.   We air up and on our way.

Of course the money we agreed on was prior to inspection.   The inside perfect.   Everything else perfect but small hardly noticeable dents on the black panels along the bottom. I am sure this was done by flinging stones when mowing.   Cost us over $1,000.   Still we came away with enough money to buy a car plus a few hundred. 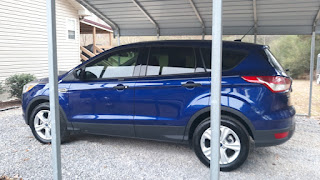 We had decided to get a more efficient car and use the truck only when a truck is needed.  It had to be something Leonard could easily get in and out of.   We found this 2016 Ford Escape. The best part it has only 9,064 miles on it.  Was garage kept and hardly used.

One more thing taken care of.

When we knew we were going to sell the RV,  I started unloading it a few things at a time.  Saturday morning son Lennie and DIL Lois came to help finish it up.  How much stuff could a 38 foot travel trailer hold????   A LOT.   So something now on my mind..... to get down to the house basement and go through it. 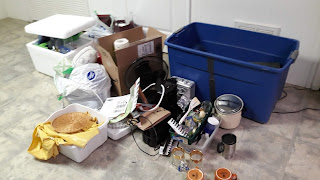 This is no where near all of it.   The things stored in the underbelly went into Lens shop.  This stuff is in the basement waiting for me to sort.   I had already brought all the food in.  Sunday morning a gentleman at our church announced he would be taking items to an Indian reservation.  This is something he does twice a year.   He followed us home and we donated two large boxes of items and two arms loads of bedding.

Our homeowners and vehicle insurances renew the end of December.  I hated the renewal amounts.  A few weeks ago Len and I  went to several agencies for quotes.   That was prior to getting rid of the RV and getting the car.   This morning we followed up on a few.  Glad to say by shopping around we save a total of $859 a year.   Whew!  That is off my mind now.

Now this is very trivial.   You might be aware that I subscribe to a food delivery service of misshaped veggies and fruits.  This came last week.   What the heck is it????   Celery Root.  Finally cooked it.  Diced it up and boiled in heavy cream, milk and nutmeg.  Then spread cheddar cheese on it and bake til brown.   Wasn't half bad.  I say half because half of us like it and half didn't.  I'll let you guess which half of us didn't. 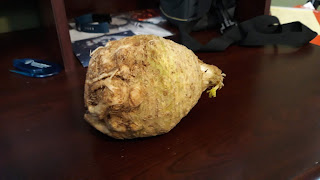