Yea, all rooms furnished, that is except for the 26x26 finished basement.  Maybe someday.

Lots of readers have asked for pictures..... here they are.  What do you think?

Living Room..... all done but one end table is on back-order. 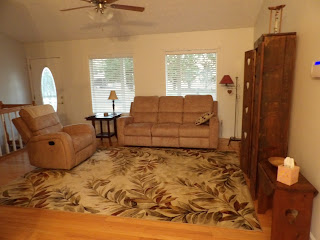 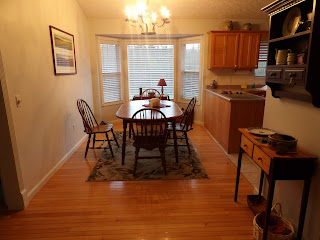 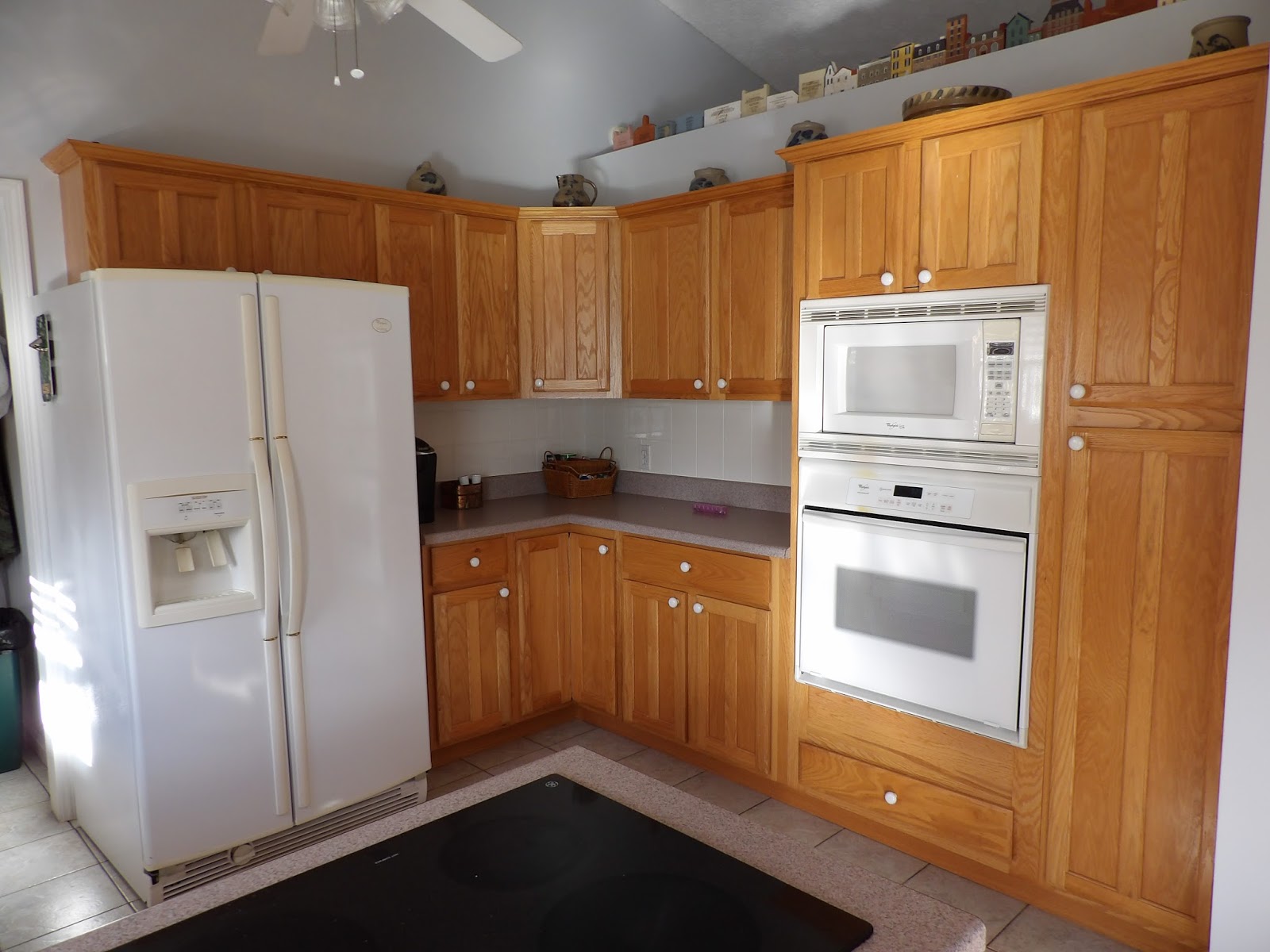 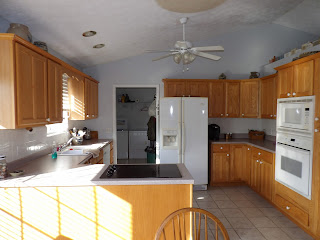 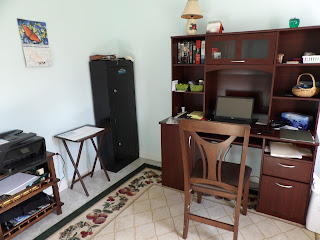 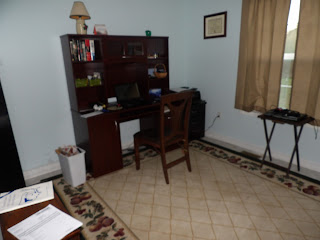 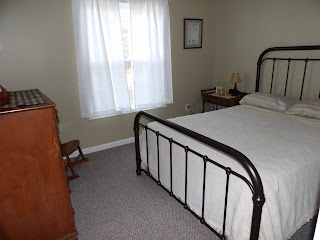 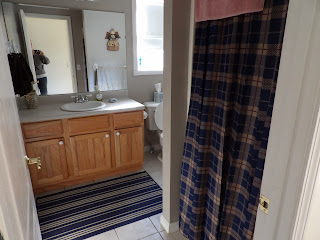 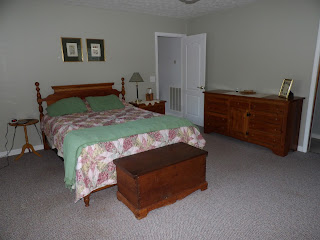 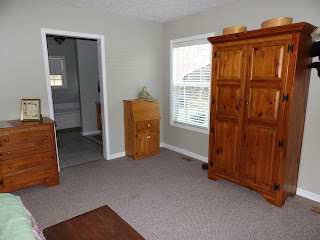 Our Bathroom..... not shown is the shower and walk-in closet 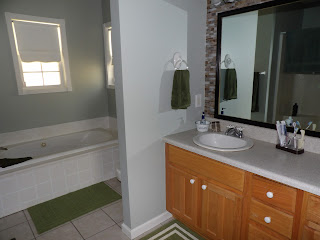 Now that the house is set up, we have lots to do outside.  We have been working out there at least a couple of hours a day.  We see slow progress.

This sure isn't NJ

No... this is not New Jersey.  We found several differences when we bought the house.

NJ is a regulation state, Alabama not so much.  To buy or sell a house in NJ every agency has to get a cut.   In NJ there must be a survey, septic tank inspection, etc.  In Alabama if there was a survey done, a new one is not necessary.  If the septic tank is recent or not a problem, no need to re-inspect it.  And just yesterday I realized there is no fire extinguisher in the house.  (We will be getting one).  In NJ, there must be an extinguisher.  This I have to agree with.

Those who have been keeping up with this blog will recall there was a double wide trailer on the property.  It was sold and removed but the garage that was connected was left.  Len will enclose it and make a shop.   Also left was a porch that was attached to the double wide.   The realtor knew a woman who wanted the porch.  Okay with us, just get it moved.

She hired a crew to move the porch.   They estimated it would take 1/2 hour.   They worked on it over 5 hours. 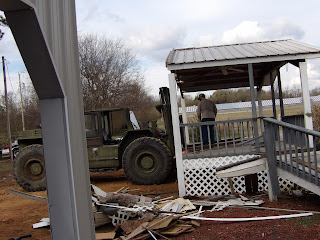 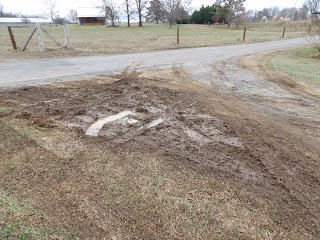 See the broken water pipe that was connected to the city water?  They ran over the water meter and broke not only the pipe but the box that surrounds the meter.  They said they would come back and fix it. 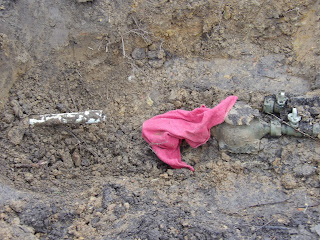 Bottom line.  Len and I picked up the debris, the ruts are still there and we were without water overnight.  Len and the Realtor's husband fixed it the next day.  It's now been 10 days and have not heard from the crew.  Don't expect to.

About the debris.   Can't do this in NJ..... unless willing to pay a fine for open burning. 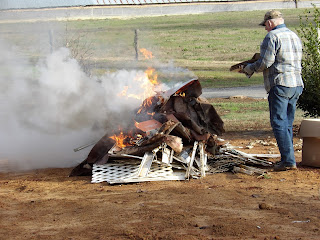 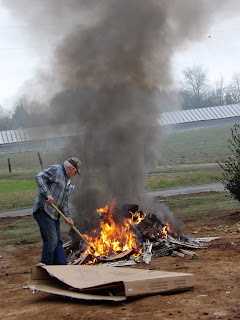 This is in the area for two RV sites.  Electric lines laid: 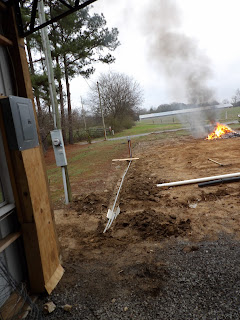 Sewer lines connected.   Water lines yet to connect.  Today we cleared away shrubbery from the area to allow access to the sites. 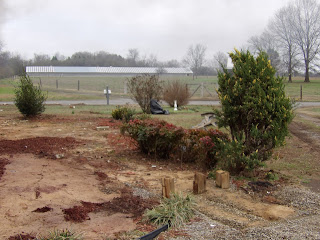 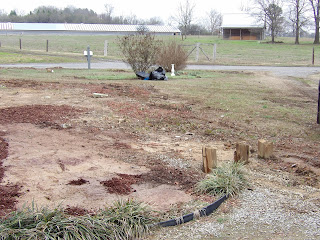 Five years ago when we were in AZ, Len took a class for Concealed Carry Permit from the state of Utah.  The permit was good for 5 years.  When he tried to renew it last May he was informed the law had changed.   To get a CCP you have to get one from your state of residence.  Yesterday a Sheriffs Deputy came to the house to inspecte our Fifth wheel so we can tag it.  They only check to be sure the VIN on the registration paper is the same as the one on the rig.

Len asked him about getting a CCP.  He said just go to the Sheriffs office in town.  So we did today.  It took all of 10 minutes.  Len filled out an application, they checked his record, took his picture and handed him the CCP which is recognized in 33 states.  Can't do that in NJ either!

When we started fulltime RVing in February, 2010 we packed some of our belongings in a utility trailer. For the last couple of years it has been parked in Louisiana.   Two years ago we bought another, smaller utility trailer and it has been in Maryland.

The week before last we drove 550 miles to Louisiana on Wednesday to get the trailer and we returned to Alabama on Thursday.  A quick trip.

Three days later, on Sunday, we left Cullman and drove about 470 miles to Wytheville, VA where two of my nephews and their families live to spend the night.   An added bonus was that my sister and brother from NJ were there visiting for the week.   Nephew Jason treated us all to his homemade PA Dutch style Chicken Pot Pie.  The next day we drove on Maryland, about 378 miles.   We stayed at my daughter Amy's for the night, got the trailer and drove to PA to my daughter Terri's where we had more stuff.

Starting Friday morning we did the trip in reverse.....from Terri's to Amy's for the night.  Then on Saturday back to Wytheville, Va.  And back to Alabama on Sunday.

This week we have been busy emptying the trailers.   I had forgotten so much of what we had.  Even at that, we had to buy one bed, two sets of mattresses, and still-to-get living furniture.   Today we bought a desk for my office.

Before doing some of our shopping we should have more closely checked out what we had in those lots and lots of boxes.  Bought dinner ware....found a set today.   Bought some towels....found a lot yesterday.  Bought a quilt for a bedspread.....found one yesterday.  I thought we had sold, donated or given away most everything.   Not even close.  I am not complaining, so glad to see things I had forgotten about.  And need.

Guest bedroom is done.  Dining room about done except for changing out the chandelier for one I had kept.  Both bathrooms done.  Kitchen is done.  Basement rec room will have to wait....it's a 26 x 26 storage room right now.  Living room is a work in process.  What we are using for furniture is a rattan set that was Terri's that she had stored away.   Our bedroom is partly done, the bed is set up.  The dresser and arm?? (however the heck it's spelled....it's that tall thing to store clothes)  are too heavy for Len and me to carry.  Len's son Lennie who lives nearby was here the Saturday between our trips but it was 20 degrees outside.  Much too cold to be moving things in.  Last Sunday they had other commitments.  And this Sunday we are expecting T Storms.  Just might have to wait another week.  He works out of town during the week. Len and I carried all the other furniture in.   I am building muscles.  Just not enough for those two last pieces.

We have not been able to do much outside.   We've only had a few days of clear warmer weather.  Lots of rain and it's expected to continue through the weekend.    Men came on Sunday right after we arrived home to move that porch that was connected to the double wide on the property.  They left behind the steps and handicap ramp to the porch. Their equipment tore up some of the front yard and driveway.  AND they drove over the city water connection and broke a pipe.  Said they would fix it.  That's the last we saw of them.  We had no water that night after driving 450 miles and unloading some stuff.  We probably stank!  So Monday Len and our Realtors husband fixed the problem.  When we got back today from town, the steps and ramp are gone.  Glad we didn't wait for them to fix our water situation.  We would have to be fumigated by now.

Oh, I managed to do another stupid thing.  Well, maybe two.  On the trip to Louisiana, we were switching the driving duty.  I walked around the truck and stepped off a rounded curb.  Twisted my ankle and fell.  It was hard to walk for a couple of days.  It is still some what bruised.  But it is fine now.  What isn't fine is my camera.   The morning we left Louisiana at 4:30 am, we were down the road a short way and Len wanted a bottle of water.  We had a small cooler on the back floor of the truck where I could open the lid and get out the water in the dark.   Hours later Len opened the cooler to get a coke.  There in the cold water that had been ice the day before was my very good camera.   How it got in there, is anybody's guess.  Life goes on, my camera doesn't.

So, we closed on the house on December 28.  The seller had 7 days to move out after closing.  (I never heard of someone continuing to live in the house once it was sold.  But they tell me it's quite common down here.)  Oh well.

The seller moved out on December 31.  Happy New Year!  We brought the RV over from the campground and parked near the front of the house and continue to spend many a trip back and forth lugging. Until last night we continued to sleep in the RV.  We bought a bed and mattress set for the guest room and used it last night.

While we were still at the campground, we came to the house two days and worked on various projects outside.  Foremost we want to get the RV site set up.   First Leonard installed a breaker box. 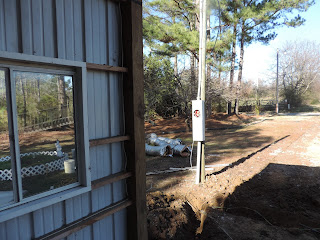 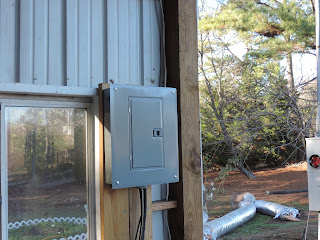 The Realtor stopped by with her son and a mother and daughter.   They are taking the porch.  It will be gone either Tuesday or Wednesday of this week.   We hope. 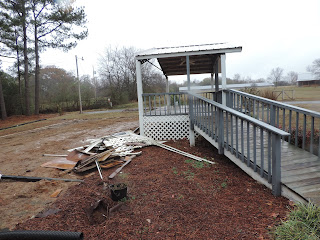 I worked around the yard a bit picking up here and there.  Love that we have Magnolia trees. 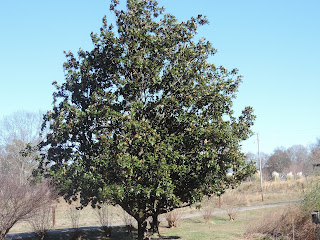 Between the house and the road is an area that was once a pond but is now overgrown.  Running along the edge on our property is a small stream that feeds the pond along with natural springs.  Lots of work to do if we ever want this to be a pond area again.  We do. 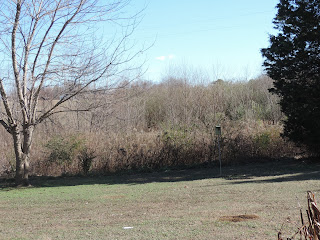 Does anyone know what this might be?  Some type of flower that's supposed to be cut back?  I would like to know before I start to hack away on it.   That's the pond area in the background. 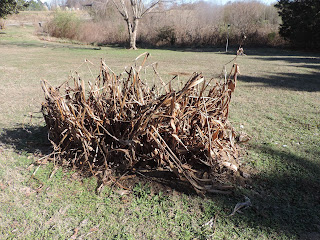 There are several dead trees in the side yard that we have to remove.   The week before we moved in a wind storm helped us along a bit.  Missed this shed, sweet! 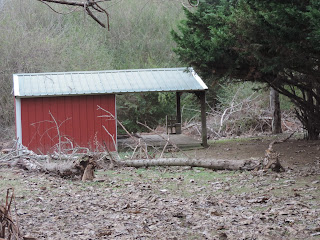 More has been done on move in day and the two days since, including covering that blue paint in the master bedroom.  Another blog will follow in a day or two.

Tomorrow we drive the 580 miles to Sulphur, LA to Len's brother and SIL Royce and Susie's house to get our utility trailer that contains some of our STUFF.   And today we will get into some more projects in the house.  And outside, if the rain ever stops.

I was so tired last night I went to bed at 7.  Hence here I am writing a blog at midnight.  Gonna go try to get some more sleep now.