Today many of the offending trees were removed.

A dead peach tree before and after. 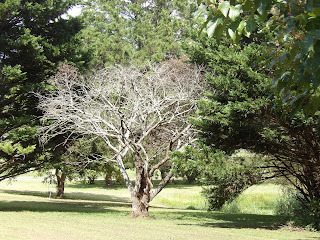 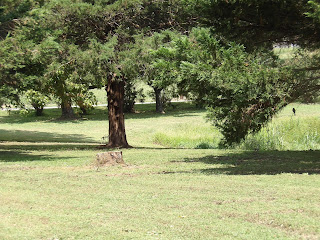 Some dead trees.  Anyones guess what they were.  Before and after. 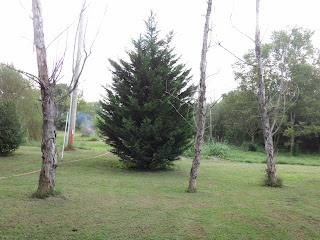 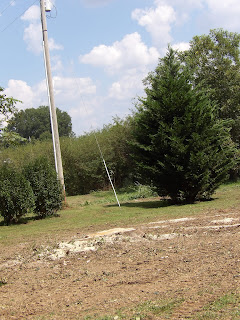 We had two tree services come to give an estimate.  One had no license or insurance.  Thank you but no thank you.   We are extremely pleased with the service we choose.  Both said this was the biggest cottonwood they ever saw.  Before and after. 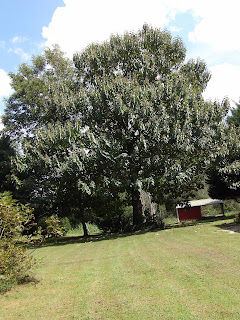 We wanted the cottonwood removed because it was so close to the house.  It also interfered with the growth and production of the pecan tree next to it.  We love how its removal opened up the whole front yard.   Yea the lawn got torn up a bit but we know it won't take long for the grass to regrow.  In the meantime, a little less lawn to mow! 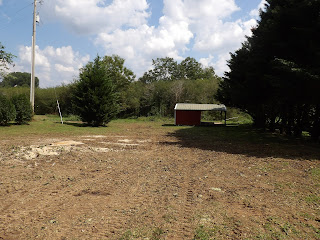 The peach tree was removed by chain saw.  The other dead trees were easily tumbled over by their Bob Cat.

And this is how the cottonwood was removed. 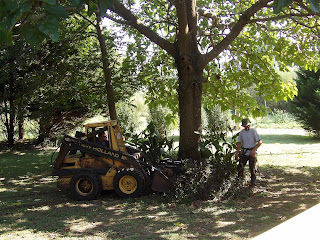 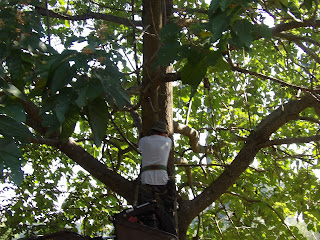 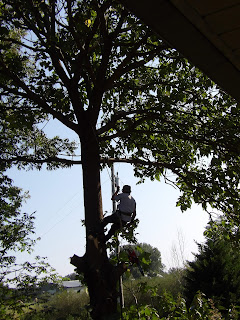 Note the pecan tree on the left. 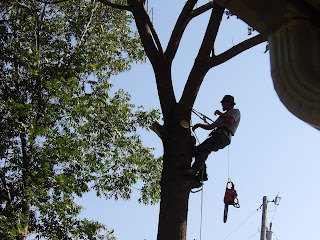 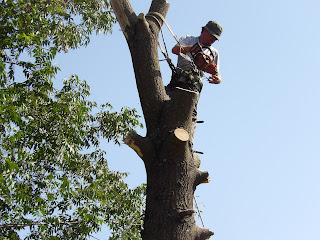 We've contacted a service that grinds stumps.  He is now in Florida doing some cleanup.  He will come here when he returns.

On Wednesday and Thursday Leonard and I spent the morning burning old paneling we had removed from the basement along with lots limbs and brush we have cleaned out.   Good thing.... look what we have now. 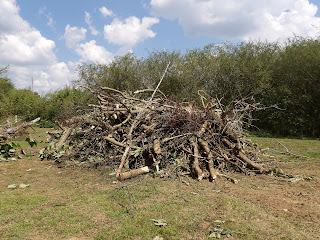 Any body want some firewood?    If not, we'll let you know when to bring the marshmallows and hot dogs.

In a few months we will have this crew back to remove about 20 old cedar trees we want gone.

On a side note.... this is fall crop planting time in Alabama.  We put in cabbage, onions and cauliflower.   This is before hoeing. 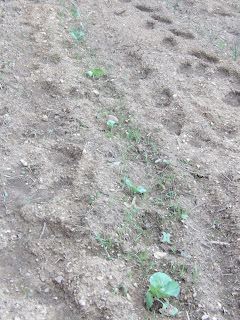 
When Harvey hit Texas and Louisiana many of our friends and family in those areas were affected.  Most were fortunate and either no or minor damage was sustained.  But for some it has been more traumatic.   Friends Kim and Joel (Joel is our son-in-law Joe's brother) had major damage to their beautiful home in Spring, TX and are now in the clean up process.  Len's cousin Jake whose house is just feet from the shore of a lake was extensively flooded up to near to roof.   As we worried about so many in Texas and Louisiana there was not much we could do from here but pray and let them know of our concern.

Then came Irma to Florida.  We have many friends and family who live in the Sunshine State.  As I made contact I learned one couple were at visiting with family in the northeast and out of the area.  Some choose to stay in their home, one cousin temporarily moved from her manufactured house to a friends.   We worried about them all.  All came through fine.

I offered our home to those who chose to evacuate the state.  One couple thought about it but decided to stay put.  However, two couples came for a visit until the situation improved.

First came Harry and Jessica and their two cats.   They left Florida in the early morning hours of Thursday, September  7 and drove straight through (about 700 miles) and arrived here in the afternoon.  This is Jessica checking the weather conditions: 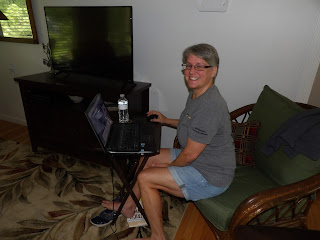 The next day we put Harry to work.  He and Len installed a storm screen door at the back entrance.  How cool, I  got out of that task.  Loving it.  Now that we have a screen door, on cooler days we keep the back door open.   And on warmer days we can keep the heavy back door open for light to shine into the laundry room.

Before  Irma approached Florida I had made contact with our friends Diane and Russ who we knew from NJ.  They moved to Florida about 5 years ago.  I asked if they were evacuating.  They did not know at the time.   On Saturday I contacted them again and asked where they were.  They were at a motel in Georgia about 3 hours away.  I invited them to come here.  They responded by asking if I could find them a motel room that was pet friendly, having 3 cats.  I told them we have an RV sitting here that is pet friendly.  They arrived on Sunday.

Diane doing her crocheting and Harry looking on. 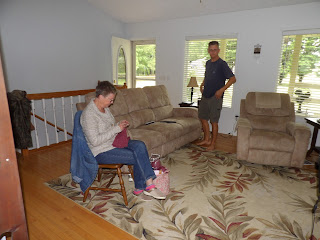 Len and Russ tackling the worlds problems.  And they say woman talk a lot.  These two never stopped.  It was nice! 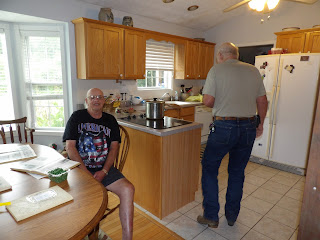 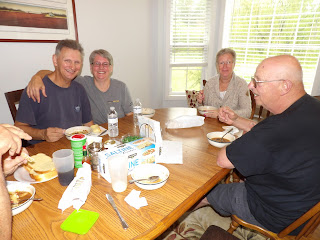 Jessica and Harry left on Thursday and drove to Jacksonville, FL where Harry's sister lives.  They hope to be back in their home early this coming week.   They heard from friends their house only has minor damage.... an awning down and missing skirting around the bottom.   I know how worried they were about their RV that is in storage.  Apparently it suffered no damage.

Yesterday the 4 of us took a drive to the nearby Clarkson Covered Bridge.  We've been there many times and thought Diane and Russ would enjoy seeing it. 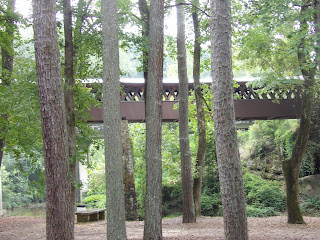 There is a picnic area in the lower areas near the water wheel house.  Note the tables are made of river rock.  Sturdy! 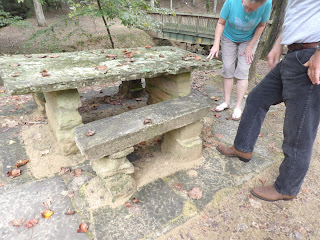 So, today we have just the two of us here.  Diane and Russ left this morning.  They were informed their electric came on late Thursday.  They, too, had minor damage to their property in Sebring.  A fence wall came loose and was moved a few feet.  Other than that, they are hoping all is well.

It was a nice visit from both couples despite their stress worrying about how things were at home.  We are grateful that all appears to be manageable.   To the four of you.....anytime you want to visit under less stressful conditions ..... welcome to our home.