Finally .... A nice day to get a bit accomplished

On this Groundhogs day, we hoped for a quick Spring.  However, Phil disappoints again.  Six more weeks.   I need not complain as parts of the country are expecting snow and ice storms.  Predications are up to two inches of ice in parts of Texas, Kentucky and other states.    Here we are just having a light rain.

Yesterday was beautiful.   Got into the low 60s.    Len pulled out his favorite toy, his Mahindra.   We have a creek that runs along the east side of our property.   I've been wanting our side of the creek cleared out.  It has been an ongoing project the last 2 years.   The reason is there were so many other projects that got priority.

The creek.  Its narrow and shallow.  Except after a rain. 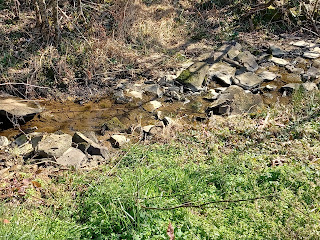 The creek separates our property from the next.   Last year that property was surveyed.  Once we removed trees and brush we found the marker. 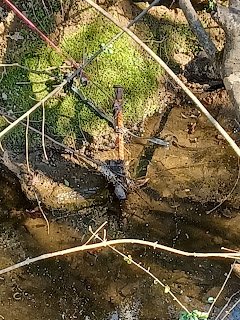 I've pulled out a lot of brush. 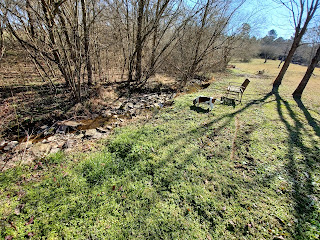 Most of what Leonard did yesterday was remove some of the larger trees.   Some were more difficult  than others. 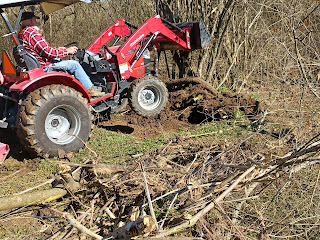 We have quite a pile out there now.   Once we handle the burn pile we have from last fall, these trees will replace that.

A few months ago I saw on Facebook something called Cooking Panda.  I though what the heck.  I'll subscribe to it.   I get a box of miscellaneous foods every season.   All brands I've never heard of.  Crackers, cookies, rice mixes, honey, jams, marshmallows, candy, salsa, spices, seasonings, vitamins, etc, etc.     In the most recent box was this: 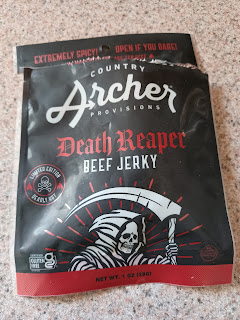 He loves beef jerky.  And hot foods.  A few days ago he opened it and took a bite.   Immediately he felt the heat.  His face got red.   He coughed.   He did not take a second bite.  The bag went in the trash.  An hour later it started to calm down.    Both our granddaughters, Abby and Charlotte, love jerky too.  I am so glad he tried it first.  We would not have wanted them to go thru what he did.  Then I saw it was made with ghost peppers.  The hottest rated pepper.

You all keep safe and a possible outlook.  Spring will come.