On to another year

One thing good..... my old printer would not connect to my computer.   I had an IT tech who was boondocking here try to resolve the issue.   He could not.   It seems that there are problems with the latest Windows 10 update and HP printers.   I researched online.   Over my head how to resolve it.  So after dealing with my frustration, I bought a new Epson printer.   It sat in my office for a couple of weeks because I did not want to "deal with it".    I should not have worried, it was an easy set up.

But of course with each problem resolved it has to be replaced by a new one.   Now I am having problems loading pictures from my camera on to my computer.   It was always so easy in the past.   Now everything imaginable comes up.  Almost 800 pictures and other stuff.  I have been trying to delete them but it is an endless task.   So, no recent pictures. The ones you will see on this blog are ones I had chosen to delete as each time I get 6 or 7 of each picture plus other stuff.    This issue to beyond me.   Hopefully the computer man I have used in the past can help.

So..... some pictures taken of family over the holidays'.  This is our newest grandson Jeremiah, son of daughter Cassie.   Grandpop had just given him a jelly donut. 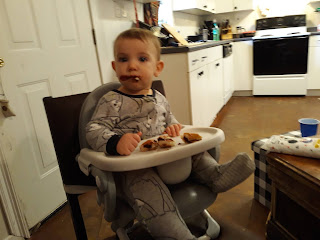 This is daughter D'Juana cooking.   Her babies are trusting she will be dropping something. 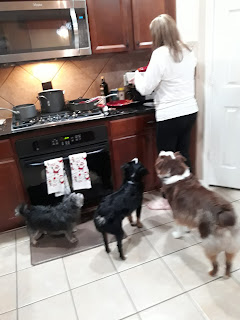 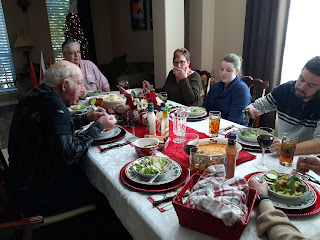 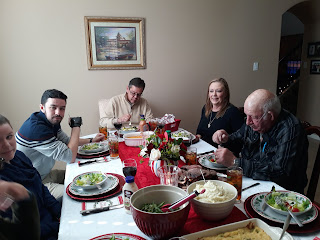 The area that Leonard's family live in Louisiana is where Hurricane Laura hit.  I took many pictures but can't get to them.     Here is one example I did get.   Fencing in front of a new housing development. 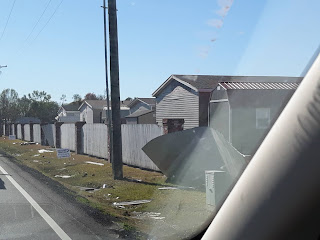 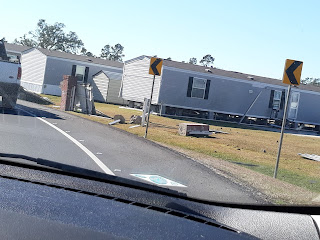 The above is no where near the sever damage we saw in the Lake Charles / Sulphur areas.   Blue tarps everywhere.  Debris piled high everywhere.

Tornadoes earlier in the year in Mississippi.   This is taken near Laurel, MS.   Miles of destruction following along Interstate 59.    Miles of trees taken down from the 2nd tornado to hit that area last year.  Those who follow this blog might remember that we were there during the first one that hit Laurel.  We were safe in the motel but heard it coming and pass overhead.  Massive damage done in the area during that one also. 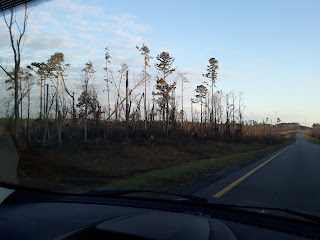 Some have asked about Leonard's health.   He has good days and others not so good.  Still tires very easily.   Both arms are about useless as he can't reach out in front or lift them.   He had been approved for surgery by the cardiologist but due to the pandemic hospitals are not doing elective surgery.  Not         even UAB.   This is not like he wants a nose job or liposuction.  He is in pain.

We've had two recent Boondockers Welcome guests.  Both stayed the night in January 9 and left on the 10th.    Our guests have lessened  a great deal since October when we had 10 rigs in only 3 weeks.  At that time RVers where headed south for the winter.   We expect in a couple of months to be busy again.

There are no street lights on our road.   The area where the sites are is really dark.  We tell our guests to expect this but I think most are surprised at how dark it really is.   One of the guests back on the 9th didn't arrive til 6:30 pm.   Pitch black.   We went out and helped them set up.

To make it a bit better for future guests we have installed two solar motion lights in the area.

To get my mind off all that is going on around us, I came up with a list of celebrities I have seen in person.   Ok...... silly.   But it gave me a few moments of stretching to my mind to remember.  And not thinking of more serious stuff.

Gavin McDavin   (The Old Man in the movie A Christmas Story)

Fess Parker   (Was BOTH Davy Crocket and Daniel Boone

Christopher Reeve  (only months before he passed)

Arlen Spector  (Senator from PA  and on the Warren Commission)