My friends on Facebook know that I have been posting regarding Sunday, the cat that was left here by the previous owner. 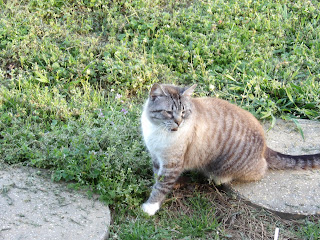 It took over 6 months before I could get near Sunday.  Then it got to the point that when I sat on the porch swing he would walk by and I could pick him up.  He loved laying on my lap sweetly purring and slobbering all over my jeans.

Last summer we were visited with a young Raccoon eating Sundays leftovers.   It never seemed to be a threat

On Sunday February 4 while watching our Philadelphia Eagles whip New England Patriots Leonard said he heard a thump on the back porch.  Since we heard nothing more, sadly we never got up to investigate.

As per my usual routine, the next morning I walked to the back porch to feed Sunday.  I found his house pulled out about a foot from where it had sat.  And the thick padding we placed inside that kept him warm all winter was pulled out of his house another 4 feet or so.  Next to the padding lay Sundays body.

We took a quick check of his body but saw no bites or marks.  We wrapped him in a towel and Len buried him placing a large flat rock over his grave.

What could have killed him we wondered.   I did some Internet searches.   I disregarded Coyotes, although I know we have them in the area. A coyote would have eaten him or carried him off.  Maybe a dog?  A Raccoon?  I didn't think so.  What about a bobcat.  They eat their prey and this was not the case with Sunday.

A few days later I saw footprints near the porch that appeared to be those of a raccoon.  Maybe?

It continued to play on me.  So we went to a sporting goods store and bought a game camera. We talked to the owner of the store and he believed it would have been a Bobcat. He said it happens often in this area.  So we figured the same.   We then placed the camera two feet higher than the porch floor and left it there several days.

I had tossed Sundays dry food that was left out in the yard.  Birds took care of it.  So I wondered if whatever it was would return.

It did.  We got four sets of pictures.  One set was taken about 6:30 at night.   One around midnight, the other two around 4 am.   Most of the pictures had an animal in it but just a small bit of the back, ears, etc. One had a face.  And since night pictures are black and white it was difficult to determine what it was.

Well yesterday we contacted the local conservation officer.  He asked me to load the pictures on my computer and send to him.   Now the pictures were clearer.  Our first suspicion was right. 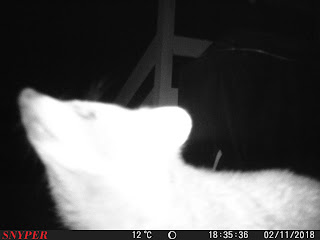 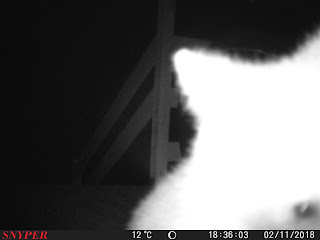 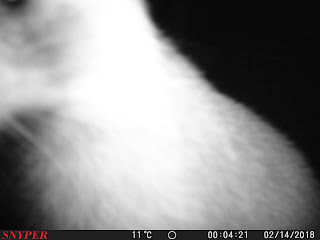 The officer says a Raccoon will become very vicious if another animal interferes with a food source.   They are well known to kill small dogs or cats if challenged.  Their bites so small and often not evident.   After getting the pictures from the camera we  put it back out on the porch.... no further night visitors.  But there is no food there now.

I regret that I would leave food out at night.  I knew Sundays habit of eating.  I would feed him in the morning and it would take him all day as he "grazed".   The food at night was always gone in the morning.  I suspected raccoons were eating what Sunday didn't but never knew they would kill for it.

I so miss our time together on the back porch on the swing.  I would go out and call him to me or he would sit on the railing looking in the kitchen window as if to say... when you gonna come out and pet me?

We had our time together the evening before this sad ending.   Now often both in the morning and in the evening I will have a quick flash in my mind..... time to feed Sunday.   Then I remember.


Is there ever so much we want to do.   And we are loving it.   After putting shiplap on a wall in the dining room last week, we decided to continue it on into the living room.   So..... Lowes is loving us even more.    Our work earlier in the week. 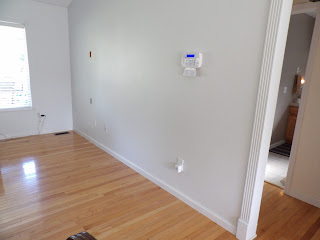 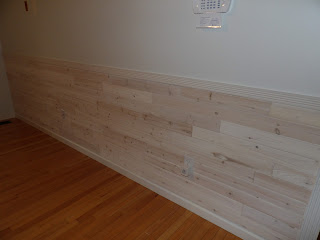 We continued it around the next wall until we ran out of supplies.   Time to order more.

In the meantime, gotta keep busy.

A few weeks ago Leonard rotor-tilled the garden.   It took him most of the day.  Then the rains came and weeds and grass grew, as we expected it would

This morning he went out to till it again.   After one hour of pushing the rototiller he was wiped out.  Only two passes were made in the length of the garden.   He can't be doing this.

The solution?   A tiller for the back of the tractor.  Let's go get it I said.  I was surprised (sure) that he agreed so quickly.    So after shopping around and making some calls it was back to the Mahindra dealer. 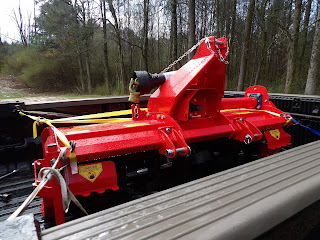 Taking it off the truck: 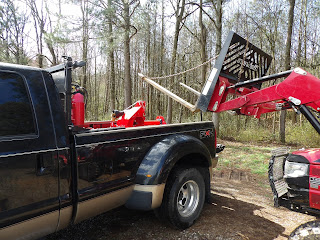 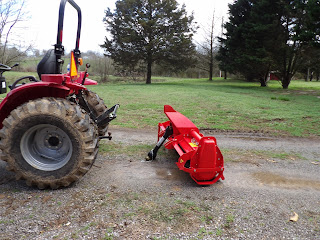 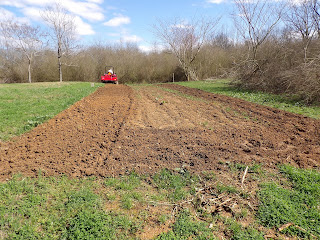 We will let the garden sit for a few days as surely there will be more weeks and grass growing.  Then he will till again and repeat.   Once we have the garden planted, the push rototiller will do just fine for between the rows.    But for now, life is easier.

Can 't wait to plant.  We do have one tomato plant in a large pot on the back porch. Love this time of year.  And the anticipation of fresh tomatoes.

Now not only Lowes loves us but also the local Mahindra dealer.  It's so nice to be loved.


While Leonard watches his Westerns I usually watch some HGTV.   That can be dangerous.  Gives me lots of ideas.   Those of us who watch Fixer Upper know all about Shiplap.   Well now Leonard does too.

Our initial attempt is a dining room wall where I wanted a chair rail. 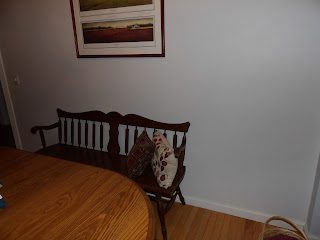 But then the idea.... Aha!  Shiplap part way up the wall.   So I think.   Lowes.  They love us at that store.  And why not?  We feel it's rude when we are in town and passing by not to stop it for a visit.  And they were so good to give us a credit card which give us a 5% discount.   Such nice people.

I sorta kinda knew what I wanted.  So last week when we just happened to be in the area we dropped on in.  Didn't have what I imagined at the store but surely their online store must.  Yup... there it is.  Just punch a few keys on the computer and wait for UPS.   Easy as that.

Today was as good as any for this latest project. 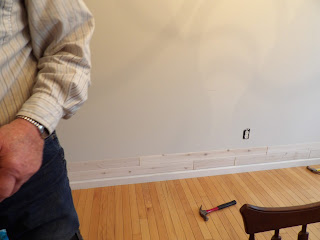 And all it took was some finishing nails, adhesive, saw, hammer and getting Leonard to turn off his Westerns for a few hours.   Don't worry.... he's watching them now.  He's a happy man.  And I'm a happy wife.   He like projects.  I like changing things up a bit.  Works for us. 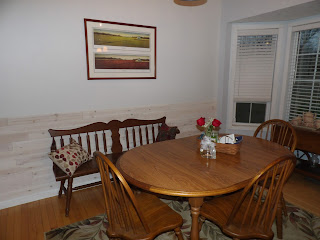 We like it so much we plan to continue the Shiplap into the living area.  All I have to do is punch some keys and get out that 5% discount credit card.