Not much of a blog today.  Just a complaint.    I just tried the NEW interface that these blogs will be changing to.

I see where there is a reading list.  My list is mostly OLD OLD blogs that are not in existence any more.   Those I read now are no where to be found.

Has anyone else tried the new layout?

Wedding and other stuff


Not much to write about lately.   Well, a few.    Many of you know we are Country Music fans.  This is one we had to pass up. 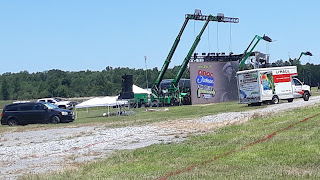 Alan Jackson came to town a few weeks ago.  Not far from where we live.   He proposed a drive-in show with some profits to go to the local food bank.   A maximum of 2,000 cars.  We would have loved to have gone but was afraid it would be too hot for us old people sitting in our car or tailgating on the truck.   As it turned out, it was a mild night.    Of well, we saw him once when he did a concert in Atlantic City.  Would have been nice to have seen him again.

Our boy Biscuit does not miss a thing.  I saw him tracking something in the front yard. 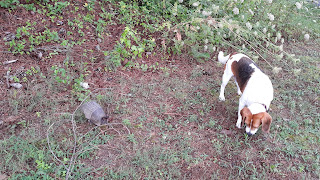 He kept his distance.  I don't know if he ever saw an Armadillo before.

We left home on June 18, spending the night in Laurel, MS and arriving at Len's brother Royce and SIL Susies on June 19.   Biscuit is treated very well there.

On June 20 we attended the wedding of Nephew Scott and his sweetie Natalie. 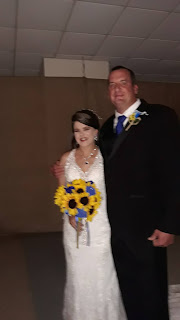 They decorated the Vinton VFW in grand style. 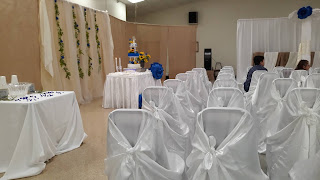 It was nice to visit with our Louisiana/Texas family.

Daughter Cassie with her Jeremiah 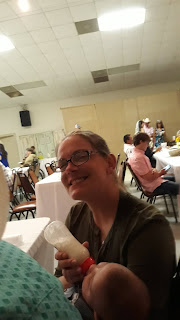 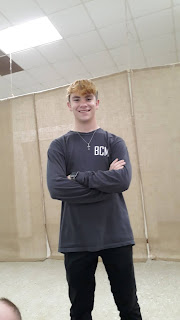 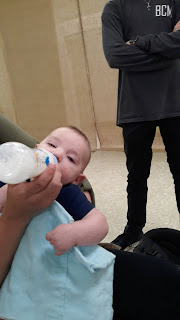 On Sunday we drove to Pearland Texas for the day to see with Daughter D'Juana, SIL Joe and grands Alex, Jared and Lindsey.     Always a nice visit.  And great steaks too!

Last Thursday Leonard had an appointment at UAB regarding his bad shoulders.  They took x-rays of both.  The right arm is almost as bad as the left.  The left he can't use at all.   An appointment is made for late July to see the orthopedic surgeon and talk about surgery.   Provided he continues to improve with his heart/lung situation he will be able to have one shoulder repaired.

I had mowed our grass two days before we felt for 5 days.   That was one week before we returned.  It looked like it had not been mowed for weeks.   Then the rains came.   And continue to come.   I did get most of it done over the last couple of days between showers but it looks like it needs to be done again ASAP.   I stress over the yard and pond not looking nice.   I enjoy mowing.  Crazy, eh?

Last night we had about 5 minutes of frightful wind.  I was on alert for tornado warnings as we had a few days ago.  But no sirens this time.     This is what I saw when I looked out as the wind whipped. 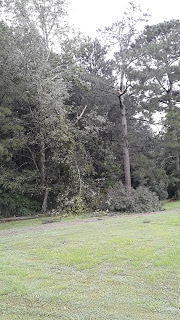 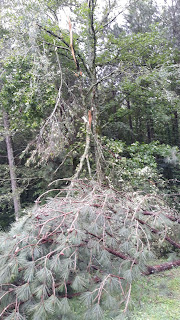 Limbs were broken off a pine tree.   That tree looks like it had been hit by lightening.  Next to it is an oak tree with several large branches broken off.

We had been wondering how to get the apples off the high branches of the apple tree.  Problem solved. 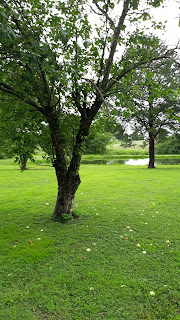