We have spent the last 5 days visiting our with our son and family here in Cullman, AL.  This is Lennie, Lois, Maddie Jo and in the front Jordan. 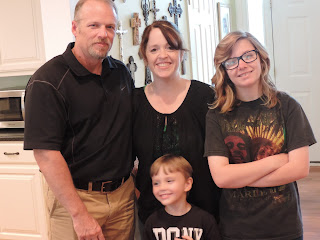 As good as the food was, the company was even better.   They gave us some hamburgers and sausage to eat on the drive back to NJ.   With hugs all around we told them we will see them in January on our way south and west for the winter.

So, we leave tomorrow morning.  We will hit NJ either Monday or Tuesday.  It is just short of a 900 mile drive.  We've made no plans where to stay or how long to take.  All depends on how tired we get each day.

During our ten or eleven days in NJ we will see both our family doctor and our cardiologist for checkups.  Then we go to a Thousand Trails park near Hershey, PA. until June 21. At that point we leave for Florida and Disney.  Granddaughters are excited.  Talking to them tonight they told me our Magic Wrist Bands have arrived which is our admission to the parks and activities we have planned.

Last Friday we  arrived at 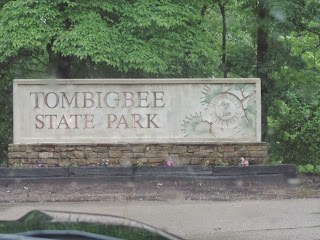 This park is a great little find.  Maybe 20 RV/Tent sites?   Full hook ups, large sites with a grill and table.  Some have fire pits.   Also a great price, with our Senior discount only $14.75 a night.  Our site: 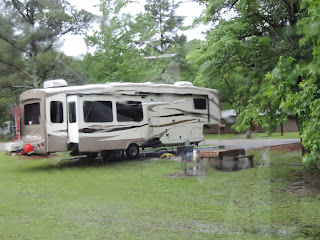 When one is in Tupelo, MS, one HAS to visit the birthplace of Elvis Presley.   Shortly before his birth his father build this two room 400 square foot house. 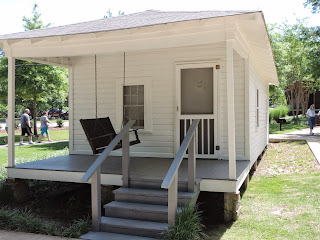 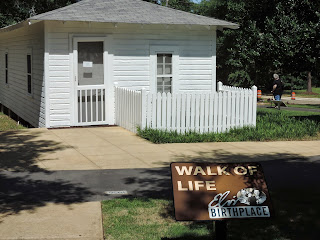 The house had no electric nor plumbing.  This is the kitchen with original stove. 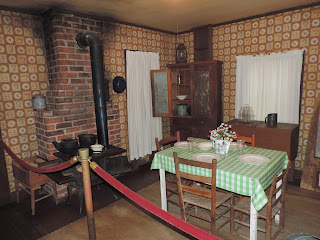 Only bedroom and where Elvis was born. 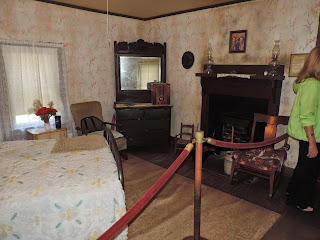 Vernon Presley borrowed $180.00 for materials to build this house.  Work was scarce.  When Elvis was 13 they lost the house for non-payment.  At that time they moved to Memphis.

Presley family attended the local Assembly of God Church.  It had fallen into disrepair.  Several years ago they moved it to its current location near the house. 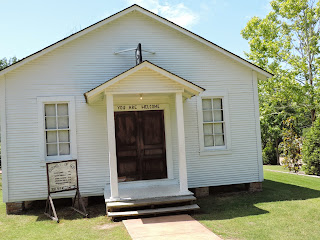 When Elvis was 22 and had already started his fame, he came back to Tupelo and saw a sale sign on the house and property.  He bought the house and 15 surrounding acres and requested it be used as a park for local children.  The east side of Tupelo was poor and there were no playgrounds.  The children were not welcome in the nicer parts of town.

There is a gift shop on the property and a chapel.  Cost for seniors to tour the house and church is $13.00 each.   It is worthwhile seeing a films telling the story of his early years.

As I often do, I hung out my hummingbird feeder.  Each day more arrive.   This picture is from the first day here.  Now I often see as many as 9 flitting around. 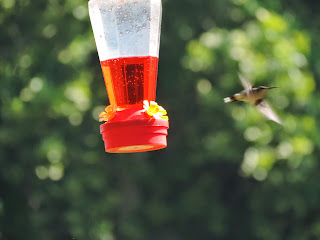 We had torrential downpours all night and most of the morning.  Feeling bad for all the weekenders who have to hook up in this rain.   We leave tomorrow for the 120 mile drive to Cullman, Al.

This afternoon, we will be getting caught up with laundry.  Glad the campground offers one on site.
Posted by Phyllis at 10:35 AM 2 comments:


After leaving Nachez, MS we made our way to Tupelo, MS via the 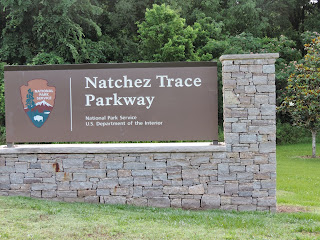 As most travelers on this roadway for the first time, we picked up a National Park Service brochure telling us the story of the Trace.  It is 444 miles long and takes travelers through 3 states and 10,000 years of history.

It bisected the traditional homes of the Natchez, Chickasaw and Choctaw nations.  As US moved westward in the late 1700's and early 1800's a growing number of people used the rough trail.

Here are a few to the sites we observed

Milepost 5.1   Elizabeth Female Academy site.  Founded in 1818 it was the first school for women chartered by the state of Mississippi.   All that remains 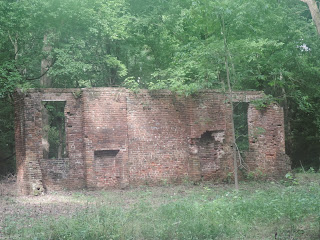 Milepost 15.5  Mount Locust.  Restored plantation and historic stand.  The only such building that is left. 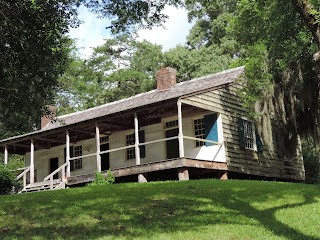 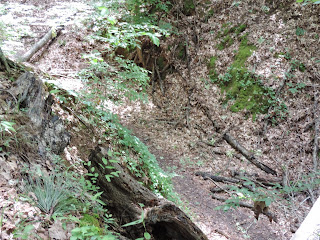 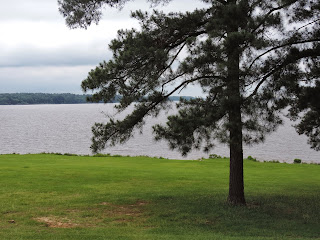 Milepost 122.0   Cypress Swamp.  We did the half mile walk through the water tupelo/cypress swamp. 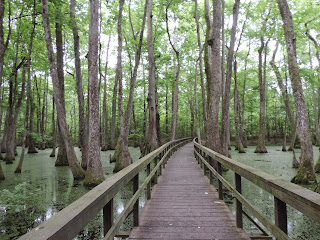 The Trace has three free campgrounds.   Thursday night we stayed at Jeff Busby at Milepost 193.1.  A nice no-hook-up campground.  But it does have bathrooms with cold water only.  There are 18 sites but we were the only ones there with an RV. 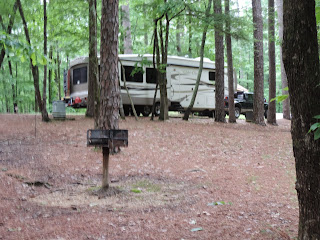 One site was occupied by a young couple living in a tent.  From the appearances I would guess they are homeless.  This morning as we were leaving the young woman asked if we were local and knew of churches in the area as they were running low on food.  We gave her our 8 Ramen noodles containers plus a few canned goods.  We have met many homeless living in tents at COE and state parks.  Sad trend.

Late yesterday we took a walk on the campground road to Little Mountain.  The brochure says a 20-minute walk each way.   It took us about 25 minutes up as it was ALL UPHILL.   This is one of the highest points in Mississippi at 603 feet.  I felt as if I had climbed that 603 feet.   Took half that time to walk back down.  But I did it and I'm thrilled to be getting more strength as the weeks go on. 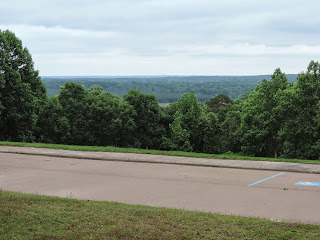 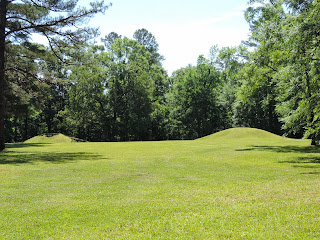 The weather has been near perfect and we are happy!

Tuesday we pulled up stakes from our month long stay in Leonard's home town to begin our slow journey to the northeast.

While in Vinton we visited with several friends and family before and after Len's hospital vacation.   We went to dinner with brother Royce and sister-on-law Susie, friends Ronnie and Nona, and friends Diana and Toto.   We attended a college graduation party for great niece Tarrah.   We spent time with daughter Cassie and visited our Grandchildren. 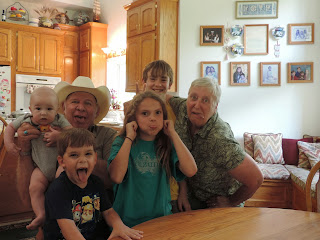 We had lunch at his cousin Russ' and Margie's house and also at his Godfather Claude and his wife Vern.  We attended our "2nd" home church that included a luncheon one Sunday.   And we relaxed for the month.

We are currently at 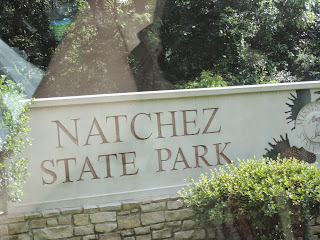 Very interesting place.  On the way into the park we pass what appears to be an abandoned small community. 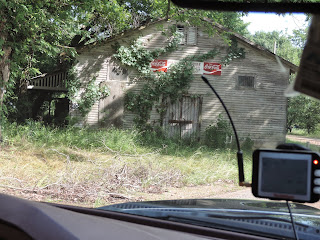 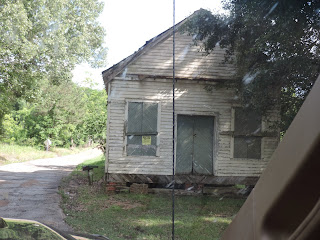 We have a great site.  Water and 50 amp Electric.  We are right across from the bathroom which includes a washer and dryer. Thursday we travel on up the Natchez Trace Parkway.  Our plan is to overnight at a free campground 187 miles north on the Trace.  If we are there early enough to snag one of 18 sites.

It was a close call

Two years ago Leonard was diagnosed with a blood clot in his left leg.  He was hospitalized 5 days, put on the blood thinner Warfarin and had to be monitored on occasion.

In September he underwent back surgery.  Prior to the surgery he had to see a Vascular Doctor for clearance.  He was cleared for surgery and this doctor took him off the medication but told him to always wear compression stockings while driving distances and to take frequent breaks to walk around a bit.   He adhered to his directions.

About 10 days ago, Leonard started having breathing problems   It became increasingly worse.  I asked him several times to seek medical treatment.  His reply was that he was not in pain, just short of breath.  He tired and could hardly breathe walking from one end of the rig to the other.  Every time I implored him to seek treatment, he refused.  Finally on Saturday when it tired him out to put his boots on, he agreed to a trip to the ER.

After having blood work, chest X-ray and a CT Scan he was admitted.   He not only had the clot in the left leg but some had developed in the right leg.   Some of the clots had broken off and entered one of his lungs, causing the breathing difficulties.  Only one lung was operating.

Yesterday he had a filter installed by the kidneys that will prevent any clot from going further.  His body will cleanse out those clots in his lung.  The ones is his leg will remain there.

We were told he is lucky.  Had the other lung suffered the same invasion, he would have suffocated.

We asked about our lifestyle.  The surgeon said as long as he remains on Xarelto for the rest of his life, wears compression stockings when driving distances and takes frequent breaks, we should go on and enjoy what we do.  Oh, and if another doctor tells him not to take blood thinners, run from his office.

My friends who RV and drive long distances.....please don't drive more than 2 hours without giving it a rest.  Get out and walk around.  And if you have a spouse, listen to them if they tell you to see a doctor.

And if that isn't enough to convince you the take care of such things..... the cost of 45 days of Xarelto is over $800.00.  With the Humana Walmart Prescription Plan we paid $395.00.  Think about that cost every month or so.   Do not let this happen to you.