As many of you know, we bought this house sight unseen when we were camping near Hershey, PA in November 2016.     After our bid was accepted we headed right to Alabama to see what we had just committed to.  We pulled in the yard and both of us said  THIS IS IT.     While meeting with the realtor we walked around and took pictures.

From day one I have hated the front two windows.  They were plain picture windows.  Could not be opened and we enjoy fresh air flowing through the house when weather permits.   Plus they were ugly.  Every other window in the house were double pane with grids in them. 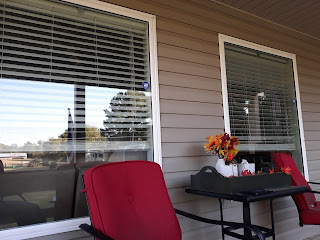 The seller had said she was changing out some windows.   The one for my office was backordered and put it after we moved in.    It has a screen and the window itself has the grids and can flip open to be cleaned.    Every window in the house was that way.... except these two in the living  room.
Fast forward a couple of years from when we bought the house.   I was looking at the pictures I took that day and saw this!!! 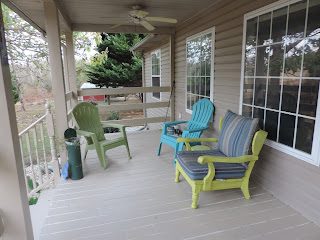 Grids in the windows.    She had them changed out and replaced with something cheaper.
So, we finally had enough this fall.   Wanted to open windows.   So ...  a trip to Lowes.  And today the same men who put the other windows here before we bought the property were back today. 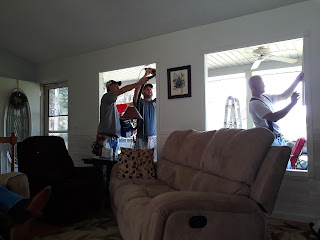 About an hour after they arrived we have this. 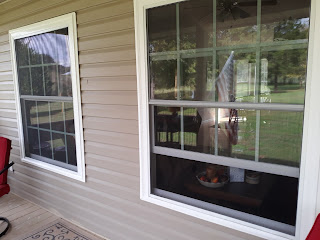 New windows with grids, screens and can be opened from either top or bottom and flip open for cleaning.   I am a happy lady.
Looks better from inside too. 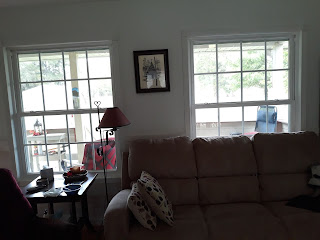 I took down the wooden blinds that were on these windows and also in the dining room.  Sold them on Cullman Yard Sale site on Facebook.    I've ordered custom shades.  It will take about a month before we have them.     I think this will be another improvement.
Early Spring of 2019 we stocked our pond with 50 small catfish.   Haven't thought much about it since. We assumed with some heavy rains they probably washed into the outlet that goes to the creek and then floated wherever.
Last week our RV guest went to the pond and tossed bits of bread.   Are we shocked.   Do we have Catfish!!!!! 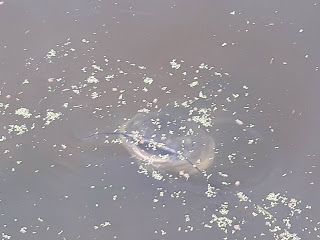 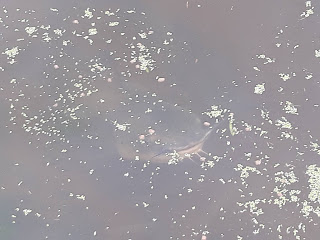 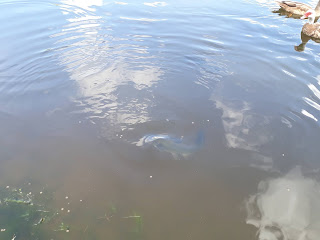 And today Leonard said he saw some perch.    We bought a 50 lb. bag of  pond catfish food.   As soon as that food hits the water, fish are jumping.  Problem is the ducks go after it too.
I took Leonard to the airport earlier today.  He is flying down to Lake Charles.   One of his sisters is very ill.  If you pray send a prayer up for Lydia.   (Family calls her Monkey, seems when she was little she was quite the climber)   He returns on Friday.
Update on our Boondockers Welcome.   We have guests arriving Friday the 31st and stay until the 4th.  Another comes for one night only, the 7th.  Then another reservation on the 8th until the 11th.  Then another on the 13th til the 17th.     So from October 30th til November 18 we have just 3 nights we are not hosting.  So far.
Until next time.

Some we are glad about, some not so much

Not so happy about

As I've said many times, we have enjoyed the solitude our property affords us.   No neighbors in sight from our house or porch.   That is still the case.   However, from our driveway now. 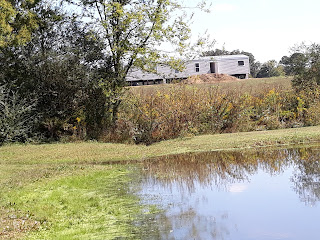 This was moved in last week in what was an open field.   We are not thrilled. 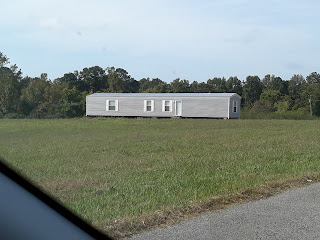 Our property is on the other side of that tree line.  The trees will stay there for sure.  In the top picture I had cleared out some brush so we would have a view of the creek that runs between the properties.  No more clearing.
Very happy about
Last Blog I reported we had just joined Boondockers Welcome as hosts as Lisa and Richard pictured on that blog had told us about.   Only a few hours later I received a reservation.  And two more since.  It's been less than a week since we joined and have had 3 responses.
Our first guest just spent two nights at one of our site.  But first ..... Mark and Deb 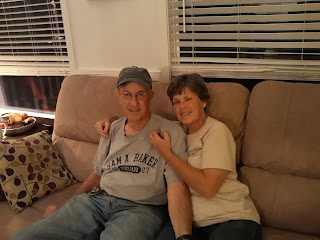 We met Mark and Deb when we were volunteering with NOMADS.   We worked with them at the OWL Center in north Louisiana.  Since then they became full timer RVs and still do frequent NOMADS projects.   This past weekend they were traveling between Memphis and a project in Georgia.  How glad we are that we were on the way.   They arrived around 1 on Friday so it gave us a full afternoon and evening to visit.
Their rig parked at The East Estate  (had to have a location name for Boondockers Welcome and that's as good as any) 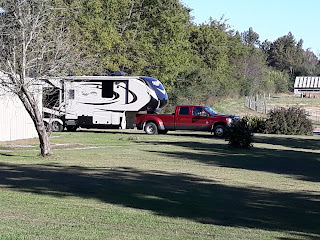 With goodbyes and waves Mark and Deb pulled out Saturday morning.   The site was not empty for long.   About one that afternoon in pulled our first Boondocker guests, Bonnie and Earl.  They retired from Connecticut. 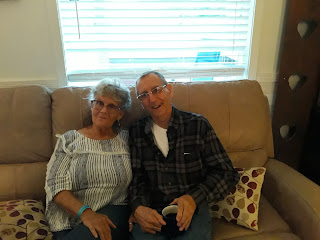 We can only hope every one of our guests will be as gracious and nice as Bonnie and Earl.  They were scheduled to stay just one night but we all decided that wasn't long enough.   They attended church with us yesterday, then did some touring while we cleaned and organized Len's shop with the help of son Lennie and DIL Lois.
When Bonnie and Earl returned from touring the area, they came loaded with pie and cake.  Another couple of hours visiting.    They pulled out about 9 this morning headed to Memphis to see the King and eventually Yuma.
Their rig: 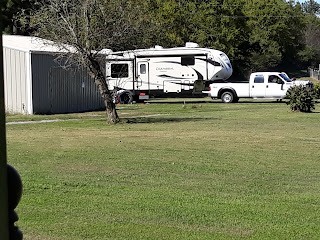 For our schedule ahead we have guests coming on October 31 to November 4 and others from November 9 to 11.    So far so good.    It gives Len and me something to look forward to and new people to meet and socialize with, all without leaving our home.
Until next time.

Who's your Daddy and We Welcome Boondockers

Finally some cooler weather and a bit of changing leaves.   Not at all like I am used to seeing in the northeast.

What I find here in north Alabama there are two seasons.   Summer and Winter.  There are so few days when we are able to open the windows and enjoy the outside air blowing through.    It is either HOT and we need the A/C or COLD and we need the heater.  But we want to take advantage when we can.

Our windows in the living area are solid windows.  The front door has a screen in the upper area and I will put that down and allow a breeze in when the weather permits.   The big window in the dining room is also a solid pane.  There are two smaller windows on each side that open.  Opening those windows and the front door screen gives us very little cross ventilation.    Also the all windows in the house have slats that give the impression of separators except the front windows.    I never noticed they had those slats when we looked at the house.    Some time between our first viewing the house and we moved in the windows were changed out.   They just don't look as nice.

We are in the process of changing out the windows.   New ones will be installed in the living area in two weeks.     I will post before and after pics at a later blog.

As I've written before we had a family of ducklings hatch back in July.   There were four babies but the hawk got three.  All in one night.    We assumed our male Pekin and female Muscovy duck cross-bred.  We expected the babies to be white with black markings as such a crossbreed would be.

As the duck grew it became evident he/she would not be black and white.  Then I realized.  We have Mallards that visit the pond.   Yup...... our newest duck looks like a female Mallard - Muscovy mix.

Here is Mama, baby and Step-Daddy.     Daddy left for more opportunities or at least until breeding season returns. 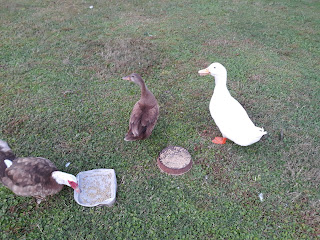 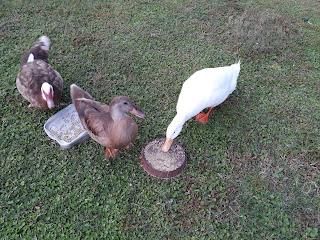 When we were full-time RVers I joined several Internet RV sites.   One of them was RVillage.  It is where RVers converse, meet and get info.   This site notifies me when someone is parked nearby.  Some times I respond by welcoming them to the area.   I did just that earlier in the week.

Lisa and Richard were camped at Hidden Cove Resort, a campground 26 miles from home and one where we had spent many a delightful time.    A short time later they responded to my welcome.   A few days later we met at Clarkson Covered Bridge about 7 miles from our house. 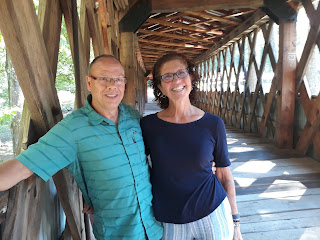 We then invited them to the house for a longer visit.  What a delightful couple.  After seeing our RV sites they told us about Boondockers Welcome.   This is where Rvers can go to find convenient places on private property to spend a night or a few.

Leonard and I decided it would be nice to join as hosts.   We love visitors.   So yesterday I completed the required information and we were then listed.   It was less than 4 hours  we got a response.  So in early November we will host a retired couple traveling from Indiana.  They will be staying two nights.

This coming Friday we will be hosting a couple that we worked with in north Louisiana when we were volunteering as NOMADS.   This is how we stay connected to NOMADS as we are unable to work any more.  Looking forward to re-connecting with Deb and Mark