Continuing on from the last blog, we now have the raised bed set in place 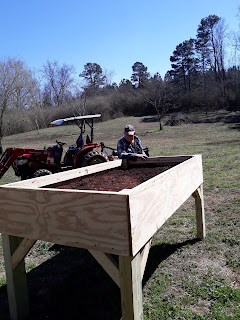 And tomatoes, peppers and cabbage planted 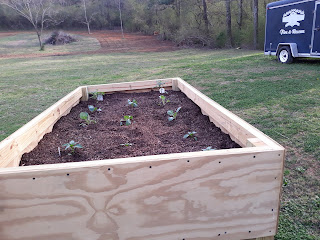 Wanting more to do, Leonard worked on removing brush from our side of the small creek that separates our property from the neighbors. 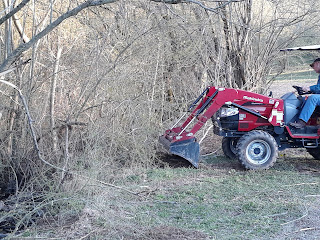 Then he tilled some ground that he had cleared last year and would bush hog to keep the growth down. By tilling he hopes only the grass will grow and give me more yard to mow. 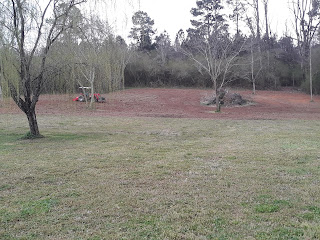 Following all this work his shoulder and knee has been giving him some pain.  And he has had to mostly rest for the last week.

We knew it would take a few weeks before the gas company would come to run gas lines to the house for our ventless fireplace, heater for basement and tankless hot water heater.   We were sitting in the house complaining that it had been 3 weeks and wondering when they would arrive.  I looked out the window and saw this. 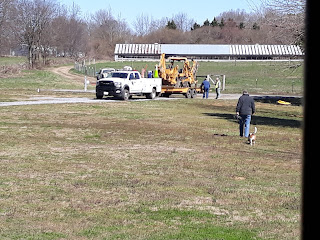 Alrighty now.   The lines were run to the house and we are now waiting for the plumber to get us on schedule to run the lines inside and then the gas company will return to connect us.   Working on the line: 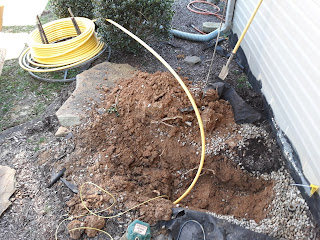 And this project means one less holly bush I need to keep trimmed. 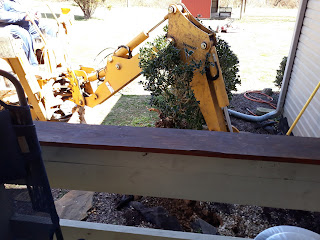 The highlight of this month was a visit from daughter Terri who lives near Hershey, PA.  She flew in last Sunday and left yesterday.    I knew she was flying out of Harrisburg, PA and had a layover in Chicago and then to Birmingham where we would pick her up.   What I didn't know was Grandson Justin and his girlfriend Karlie would be joining her in Chicago where they live.  What a surprise. 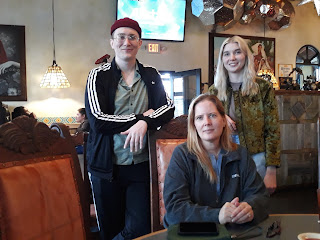 Justin and Karlie were to fly back on Wednesday.   On Monday the news was filled with threats of heavy storms, winds and possible tornadoes to hit our area on Wednesday.   Knowing that, they changed their tickets and left on Tuesday.

Leaving early was a good idea as there were the rains and tornadoes in the area on Wednesday.  At one point we were under a tornado watch and headed to our basement.   Leonard made himself comfortable.  Biscuit doesn't like going down the steps but once down he is fine.  We were only down there about 30 minutes.   No tornado near us but some did touch down in Cullman County. 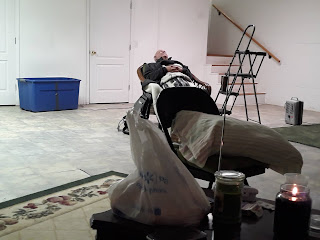 Terri and I had planned on doing lots of work in the yard, mostly spreading mulch.   The entire time she was here it rained and stormed.   Nothing got done in the yard.

We did do some furniture shopping.   I wanted to buy an occasional chair for the living room in a sage color.   We went to at least 12 furniture stores here in Cullman and up in Decatur, AL.  Everything is beige, gray or white.   Nothing in sage and few in any color.   We were told they could custom order a chair and to expect it around the Holidays.  And they didn't mean Easter.

We are busy with our Boondocker guests.   We have a rig parked here now until Monday.  They arrived yesterday as did another who left a bit ago.  Between now and May 1 we have 7 reservations.  I'm sure there will be others as often contacts are made just a day or two ahead.   So glad the Boondockers Welcome site keeps a calendar as sometimes it gets confusing.

We are now fully vaccinated with the Moderna shot.  I had no reaction.  Len was weak and slept for a day after his 2nd shot.  Got up next day and was fine.

Well that's it for now, I think.

Boondockers and getting ready for Spring

When we first started hosting Boondockers Welcome we had a run of guests in October and early November.   Then it got slow.   Probably due to folks being where they wanted to be over Thanksgiving and Christmas.   Now we are again getting requests on a regular basis.

As of this date we have hosted 15 times.  We had two other reservations that cancelled due to the bad weather.  We have 7 upcoming reservations on our schedule.

Aside from hosting we are looking forward to Spring.   Leonard decided to build a raised bed for planting vegetables.    We enjoyed having a garden but neither of us are able to get down on the ground unless there will be a crane nearby to stand us up.   As usual, nothing he makes is small. 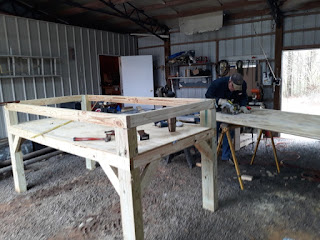 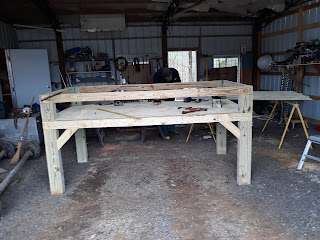 It's going to take a truck load of dirt to fill it once it is complete.
In the last blog I wrote about putting up duck crossing signs.   I guess someone else had a need for one as it disappeared one night. 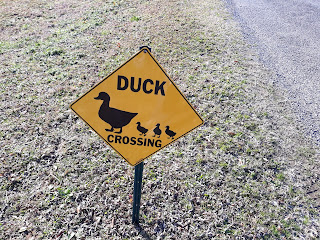 I have ordered a replacement.   However, the new one will be hung on a solid post across the road.  Our neighbor up the street has some of his property fenced in.   Speaking of which, this afternoon we noticed firetrucks and police at his barn and saw smoke rasing.   He stores hay in that barn and it caught fire.   He did not lose the barn but some insulation was destroyed.

A portion of our driveway was getting muddy when it rained. 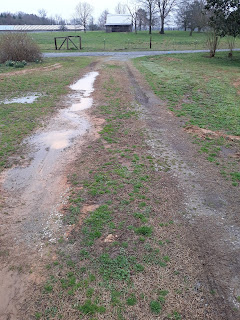 We had stone delivered last week.  Oh it's so much nicer.  Especially since the Boondockers have to back into this area of the driveway and then back into a site. 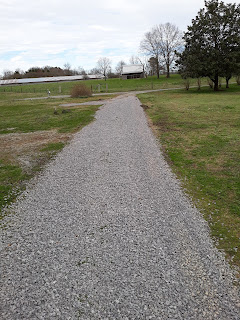 On a side note:    That long building in the background is where the fire was this morning.

We've had a lot of rain recently.   One nice day last week I was sitting on the porch and I could hear water running in the creek that separates our properrty from the neighbors.   The creek runs along the wood line. 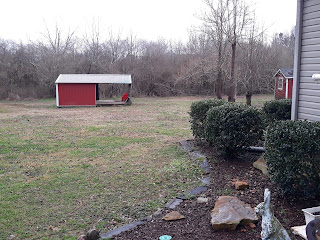 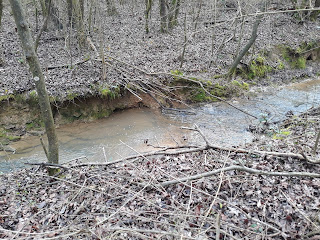 One day when Len was working in his shop on the raised bed I was walking around the yard.  Our duck named Baby Duck is the big white duck.  He is a Pekin.   He can be a bit mean.  Will put his head down and run behind me like he is charging.  I stop and turn around and he turns around like he never did a thing.   Our young duck Frances (the entire brown one) is the daughter of our Muscovey, Elsie.  The Muscovey has the white head. 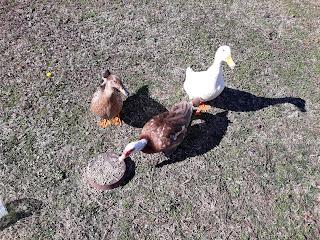 To get back to the story I started.   Baby Duck has been mean to Frances.  Will chase her away from food and chases her around the yard with his head down.  Nasty.   Well, I looked out at the pond.  Baby Duck was on top of Frances.  Seeing how he has been mean to her, I thought he was trying to drown her.  I called to Len who was in his shop.    OK..... I'm dumb.    That wasn't it at all.

Elsie started laying eggs again a few weeks ago.  But wasn't brooding.  So we removed the eggs and replaced them with two ceramic eggs so she would continue to lay in the same place.Then last week I realized she was sitting on them for a length of time.  A few days later I checked, the eggs she had been sitting on were destoyed and eaten.  Possum?   Raccoon?  Whatever.   She still must be laying but no idea where.

Biscuit says Hello.   Len and I can't believe how much in love we are with this boy. 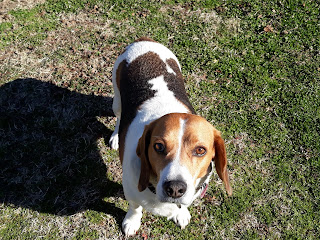 Oh..... we just got our 2nd Moderna shot on Monday.  Len was weak and tired yesterday.  Could not do much moving around and slept most of the day.  I've had no reaction.