We have lived in Alabama for over five years now.   What a cold winter we have had.  Leonard is ALWAYS cold.   He surely loves both our Walk in Tub and Gas fireplace we had installed.   He makes lots of use of both to warm up.

We've had the occasional snow.  Doesn't stay long.  Biscuit is not too sure he likes it at all. 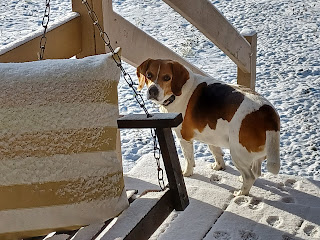 He does know he likes our bed. 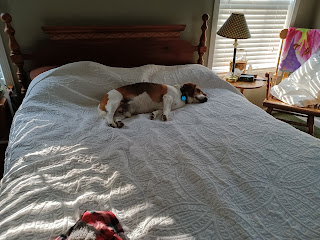 We are liking the longer days.   This greeted us last week when we left Bible Study at a little after Six in the evening. 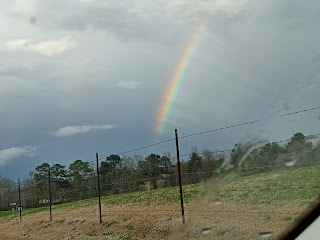 After much debate and consideration we decided to spend more of our children's inheritance and go ahead with enclosing the porch to a "3 season room" .   The contractor said it will take about 5 weeks to order and receive the materials.   Of course it will have a Doggie Door.  Biscuit loves sitting in HIS chair on the porch.   This is how the porch looks now.   That's his red chair. 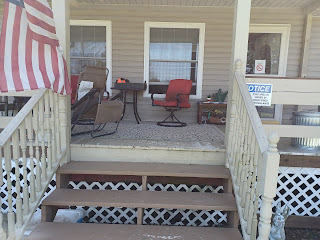 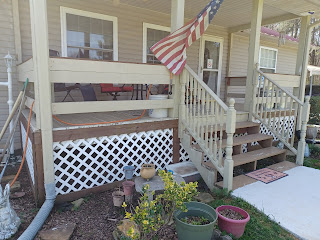 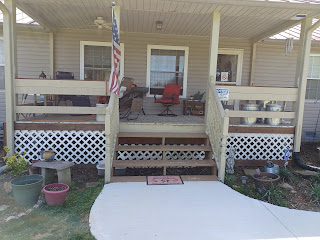 We hope to use the porch even more once it is done.

It is getting time to think about planting to veggies in our raised bed that Leonard made last year.  Some might remember we had no luck at all with it.  Nothing lived, nothing grew.   We suspect it was the soil we used.  Over the winter we changed out the soil and composted all veggie scraps.  We will mix in the compost this week and let's see how well we do.    The last few months I have been getting an order from Worthy Flavors of veggies.  We have been well pleased.  This is this weeks delivery. 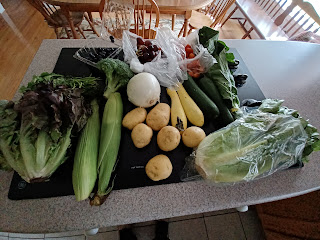 Last Friday I decided I needed to mow the grass.  I drove the mower out of the shed, took it to where we kept two full gas cans and filled the gas tank.  I then drove it about 100 feet and it died.  No starting it again.   So to John Deere we took it.   The gas tank was full of water.  No gas.  It appears when we were away for a long weekend someone noticed the gas cans sitting in our carport and decided they needed gas.   We would have preferred they just took the gas and not feel the need to fill the cans with water.   Got the mower back yesterday.  Wrote a check for $240.00 and came home and mowed.

We are now hosting our 107th and 108th Boondockers Welcome guests.   Always a treat to meet different folks and see different lifestyles.    Two weeks ago we had three young people in a 28 foot travel trailer.   With them was 6 dogs, 5 rabbits, 4 cats, a tortoise, a ferret and a chicken.  Can you imagine?   One of the cats got out.  They searched for it but could not find it.   We saw it a couple of days ago.   I've been putting out food and it disappears.  That doesn't mean the cat took it.  Beagles have a great nose.   The people are returning next week on the their trip back to Maine to see it they can retrieve it.

We took a quick trip to Louisiana over the past weekend.  We left on Thursday and got back this morning.  Daughter Cassie's youngest Jeremiah turned two last week.   Cassie's big sister D'Juana gave him a birthday party.   Cassie talked to her father two weeks ago and was telling him about the party.  She asked if we would be in Louisiana and able to attend.   He told her no, sorry we would not.     She didn't know but we already had planned on going.   We wanted it to be a surprise.

We left Thursday and drove about 250 miles and stayed at a motel in Laurel, MS where we have stayed often in the past while on these trips.   The motel needs to LOT of work done to it.   We decided next trip we go somewhere else. There were few guests, mostly construction workers.  We noticed there were many empty rooms and it looked like they were torn apart.   We were told every room was getting a makeover including carpeting, new fixtures in the bathrooms, etc.   It needs it.

We got on the road Friday for the remaining 340 miles.   What an experience.   First thing was a pickup whipped around us missing a tractor by inches in the other lane.   Had he connected we would have been hit.    A short time later the driver in front of  us slammed on  their brakes, causing Len to almost rear end it.

We have friends that live near Baton Rouge.  Often when passing through the area we will meet up with them at the Waffle House in Walker, LA.    I contacted Judy the day before and arrangements were made.   This is Judy and her husband Leonard. 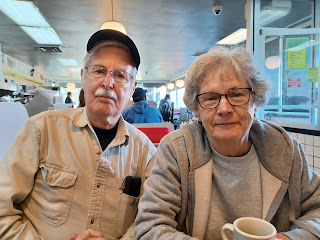 As we continued on we would cross over the 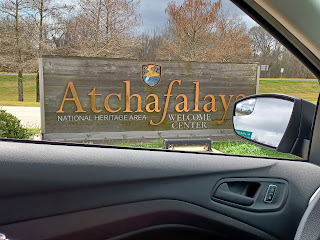 basin.   This involves an 18 mile bridge over mostly swamp land.    We were on the south bound bridge.  Near the north bridge end there was an accident causing a stand still the entire 18 mile length of the bridge and about another two miles. 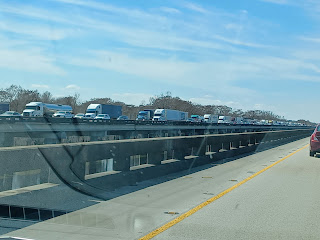 Glad we were heading south.    Continuing on we noticed an RV awning laying on the side to the road near Lake Charles.   Right after crossing the Lake Charles bridge there were two RVs in front of us.  We saw the one in front of us had its awning post has flopping around and there was no tag on the RV.  Then wow..... the side of the RV came off.   Plywood and fiberglass flying everywhere, including over our car.  Luckily we were not hit.  Close call.

Relieved to get to the motel.   And more than relieved that this motel was fairly new, clean and beautiful.  The next issue.  D'Juana, husband Joe and grandson Jared would be meeting us there.  D'Juana had made the reservations.   They were registered, we were not.   The desks clerks had suspicions.   The motel is Cobberstone Inn and Suites.   It is in Vinton, LA.  There is also one in Vinton Iowa.   Sure enough we were registered in Iowa.   They said this is a frequent mix-up.  LA or IA.    They got it straightened out quickly.

I had texted Lens sister Sissy earlier in the day to tell her he would be in the area.  She got busy and notified brothers, etc.    Dinner was at 6:30 over in Orange, TX. just about 15 minutes from the motel.  We got on the road and arrived about 70 minutes later.   Yup, another crash causing a major delay.  We were not the only ones late as two of Leonard's brothers were in the backup. 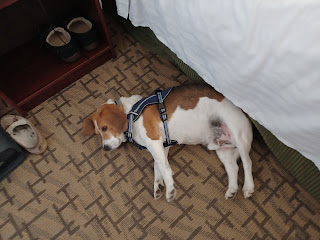 What a great evening we had.   This is Len, Sissy and three of Lens brothers. 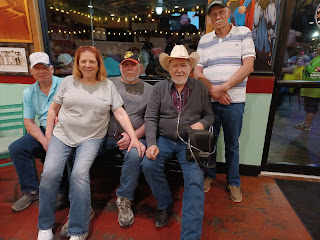 Lots of pictures were taken the included the spouses.   Unfortunately not on my camera.  But here we are with Leonard being a wise azz. 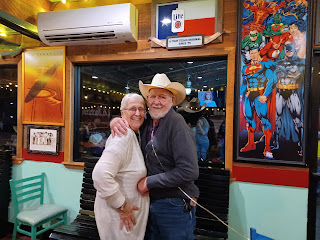 The party was the next day.   D'Juana made all the arrangements.   OK, another story.  She rented the Rec Center near where Cassie lives.   D'Juana and family live in Arlington TX a five hour drive.  When they got there to set up the building was locked.   And it was WINDY.  They called the woman who was to open the building.  She said she was coming right over.   Never happened.   We made do outside. Knowing D'Juana this woman can expect an ear full!

As we planned Cassie was surprised and thrilled to see that we came down.   We are glad we surprised her.

Jeremiah getting into this cake.   (not thrilled with the hair cut)  But he has the brightest, blue eyes ever. 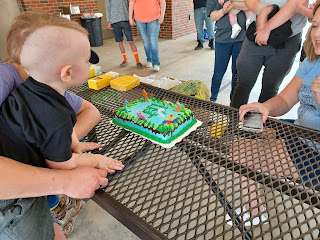 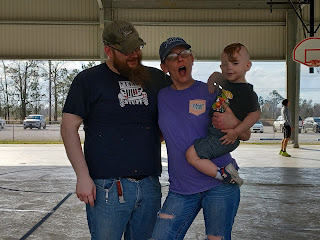 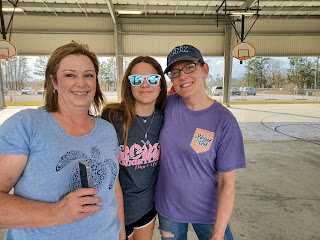 That evening Cassie, Jeremiah, D'Juana, Joe, Jared, Len and I had dinner at Texas Roadhouse.

Even with all the traffic issues and exhausted from such a quick trip and we are so glad to went.

Sisters visit and moving on along with life

Gosh..... we were quite busy the last two weeks in January and first two weeks in February.   We hosted 8 Boondockers Welcome members often two Rigs at a time for a total of 15 days.   During that time we hosted our 100th rig.   To celebrate we presented them with a gift bag. 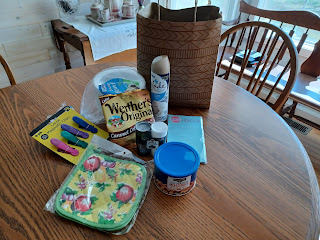 We did manage two small trips.    One day we took her to the Alabama Music Hall of Fame over to Tuscumbia about an hour from us.

This is Debbie and Leonard checking out Webb Pierces mighty fine car.    And beyond that is the group Alabama's bus. 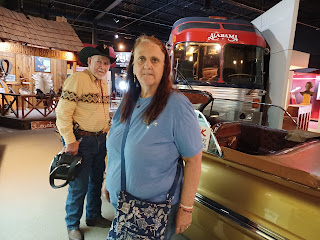 While over that way we took her to a very special cemetery.    Only one of its kind.   Strictly for Coon Dogs. 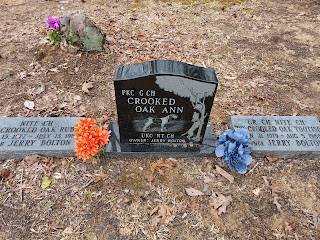 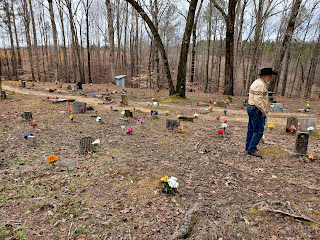 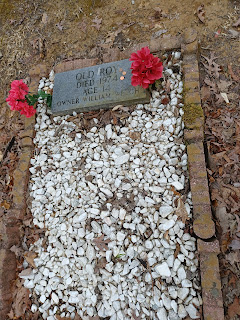 This cemetery was started in 1937.  They have strict rules about only certified Coon Dogs can be interred here.

It looked like we were going to be a bit less busy with Boondockers in March.   We had 4 reservations.   In the last week 3 have cancelled.    Is it due to the world situation, cost of fuel or gas? We really don't know.

I seldom shop in-store.   For more than two years I have done the Wal-Mart pickup.  More and more things I want are not available.    A couple of weeks ago I decided to pick up a few items inside.   I walked by the pasta.   This was the pasta shelf.  Good thing I wasn't planning on spaghetti that night. 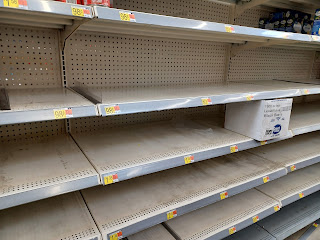 Len loves Tater Tots.   He was out of luck this time. 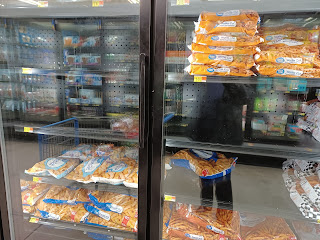 Biscuit is at the Vets getting a bath and pedicure now.   I'll pick him up in about an hour.  I noticed while in town that gas jumped 15 cents a gallon over night.    I feel strongly that this country needs to get back to being energy independent.    We would not be trusting other countries for our supply.

Speaking of Biscuit, a cousin sent me a child's story book called Biscuit Gives a Gift. Thanks Muriel.

Years ago I was given a picture that belonged to a Great Aunt.   On the back was a note that it was a gift from my mother's sister Alda and her husband to this great aunt.    It is a Japanese scene. 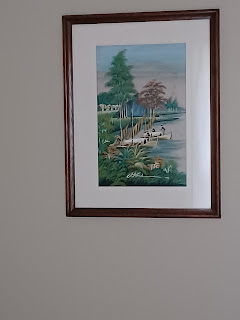 I had it hanging in our guest room.  Every time I looked at it, I felt it needed to be returned to my aunt Aldas family.   I told cousin Muriel about it.    She said her parents were in Japan in 1950 and 1951.  Her Dad was an ammo inspector for the military.  She asked if it was painted on silk.   I looked closely and sure enough it is.  I sent it to her in Florida.     She was so pleased and I leave it up to her which of the 3 siblings it will be passed on to.

Well about time to go get Biscuit.   He will be smelling sweeter.