A visit, new borns and lights

Most of the yard work Leonard is unable to do.   A lot I am starting to have difficulties.  He can bush hog, I can mow and weed whack.     I attempted to spread mulch. After a few bags I knew they were too heavy for me to lift, pull around and flip.    What to do.    I hired a local man to help.    After a few slow starts (long story, some frustration) he finally accomplished a few things.   He spread the mulch, cleaned weeds from around front stepping stones, weed whacked around the house and the cleaned the weeds from around the pond.   I am attempting to keep the pond weeds down by weed whacking along with applying pond weed killer.

It is late in the summer for our annual visit from our grand-daughters from Maryland.  Daughter Amy and the girls left their home on Friday, July 24 (staying overnight in Knoxville, TN) and arrived here about 10:30 on the 25th.   It was a long drive and a short visit for Amy.   Before she headed back to Maryland we had lunch at  one of the girls favorite restaurants in Cullman.  Then Amy left to return to Knoxville for the night and home on Sunday.   This is Amy, Abby and Charlotte all decked out in the current world wide fashion. 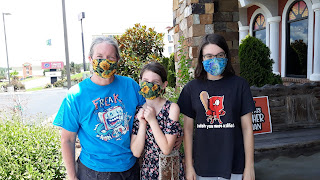 While Amy was still here, I told them that our Muscovey duck had been sitting on eggs for the last couple of weeks.   We really didn't expect there would be any hatching.   We only have two ducks at this time.  A male Pekin, and a female Muscovey.   I checked to see if ducks cross breed.  They do.

Abby looked into the box where Elise was nesting.   Looky here.....excitement.... a baby.   Two hatched that day, two the next.   Two eggs remained unattended for two more days when I removed them.   Daughter Terri did some research.    When the Mama is a Pekin and Papa is a Muscovey the ducklings are called Mules.   When the Mama is a Muscovey and the Papa is a Pekin, as ours are, the ducklings are Hinnys.     In both cases the ducks are docile, silent and sterile.

Papa (named Baby Duck) and Mama (Elsie) and babies (yet to be named).  We can not get closer than about two feet from babies when either or both Papa and Mama charge us with mouths really to nip.  We are amazed at how the male duck tends to the babies.   If one lags behind he will nudge it to move it along.   All four of them are usually within feet of each other. 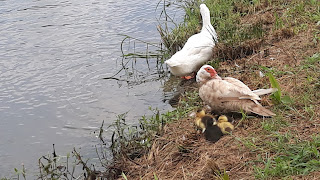 Ducklings at one week enjoying a swim. 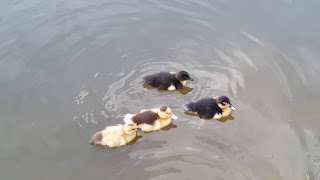 And another project we did a few days ago.  Len's shop was dimly lit with just a couple of fluorescent light fixtures and two single light bulbs.   We purchased two LED fixtures to replace to single bulbs.   To get up to the fixtures,  I lifted Leonard with the tractor.  He stood on the platform.   Works quite well.   And impressed with the improved lighting. 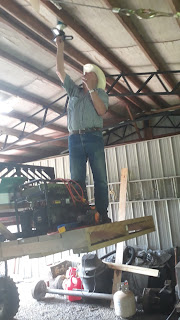 Leonard has no use of his left arm from falling on his shoulder almost two years ago.   With his other health concerns, the cardiologist would not agree to surgery until there was a marked improvement.  That time has arrived.   He gets surgery on his shoulder August 24 at University of Alabama in Birmingham.   We were impressed with the surgeon and his cardiologist will be available in case of need.     Recuperation will take a bit of time.  That's okay.. something to look forward to.

That's about all for now.   Taking it day by day.