It's a bit cold for humans

First... several people have inquired as to Leonard's health.   Overall he is doing much better.   After the left shoulder replacement in October he could only get comfortable sleeping in his recliner.   And he was always COLD.   So cold that he kept the gas fireplace going until I felt I could pass out from the heat.

Last night makes the 4th night he has slept in the bed.  He is not always cold and says he feels so much better rested in the mornings.

He continues Physical Therapy twice a week.   Not only for the shoulder that was operated on but also the other shoulder.   Now that the left side feels better, the right side is the one that hurts.   He went to UAB this past week and had a cortisone shot.   It has helped.   In addition, a few weeks ago his right knee felt like it was being stabbed.  This continued for 4 days.  He has had 4 surgeries on the knee, including a replacement.    Back to UAB yesterday.   They took X-rays of knee, hip and lower back.   Nothing showed up.   They also did blood work to see if there is an infection.  Waiting to hear.

Since he was diagnosed with Pulmonary Arterial Hypertension he has been on two very expensive mediations.   One has a cost of over $16,000 a month the other about $4,000.    UAB recommended two foundations that help with the co-pays.  Both accepted him the last two years.   His Prescription D paid all but about $3,000 a month on one and all but $142.50 a month of the other.   Two foundations picked up the difference.

We have received notice that the foundation for the cheaper med no longer has funds.  We are responsible for $142.50 a month.   We tried other foundations that were suggested and none of them have the funding.  We will pay the $142.50 a month    We were told we would be notified around the   21st or 22nd of January about the other foundation.    We have heard nothing.   But I am on a Web-site for people with PAH and almost every person dealing with that Foundation have been denied.   We don't expect to be any different.

According to statements from Humana, for two months we will have to pay over $2,800. and then it drops to $595. a month.    Once we get the final notice, he will call the Cardiologists of UAB and get direction from them.

These Foundations receive funding from Corporations and private doners.  A sign of the times.

We are getting busy again with RVers.  We had several guests during December, unlike last year.  Lots of people travel with their dogs.   This was such fun.   Biscuit doesn't usually play.  He made exception with this new friend.   We had so much fun watching them. 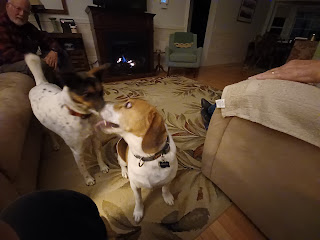 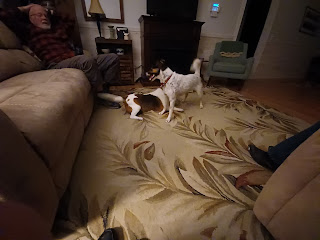 Then a few days later, 2 Labs arrived.  As soon as they were let loose it was to the pond.   Don't they know it's cold.   Biscuit said no thanks. 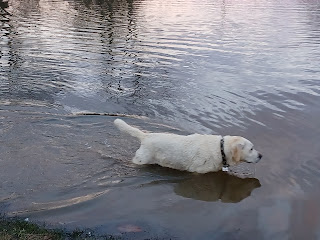 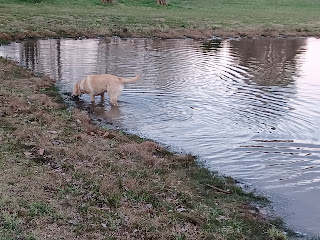 Woke this morning to 16 degrees.   First time since we've lived here we have some ice. 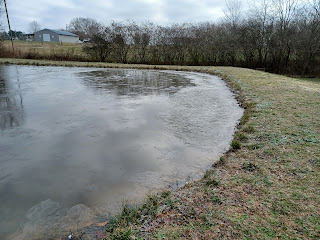 As I said it todays post title, a bit too cold for humans.    But not for Labrador Retrievers or ducks..... 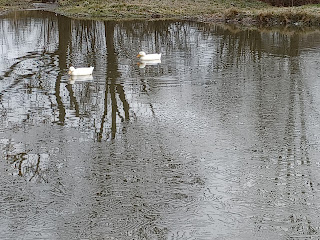 We are expecting our 90th Boondockers Welcome guests in about a half hour.    We have 5 more reservations on our calendar.