Ducks a growing and sun room getting done.

If you are squeamish stop reading now.

A couple of years ago a small feral showed up at the house.  I could not get within 5 feet of it.  But she was always close to Biscuit.   They would nap together and roam the yard together.  Biscuit loved that cat.   I would put food out for Biscuit and he and the cat would eat out of the same dish together.

After about a year we could see the cat was very sick.  It's breathing became labored.  She stopped eating.  I purchased some soft cat "soup".   She took a lick or two and walked away.   Still I could not get near it and if I tried the poor thing would scamper away as best she could.   I hoped she would go off into the woods and die.

Then it was gone.   I knew it had died.   Months later I saw this piece of dried-up substance out in the front yard.  I kicked it over and saw whiskers and one black and white paw.  I knew it was the caucus of the cat.  Obviously Biscuit found his friend and brought her back home.

I picked it up with a shovel and put in back in the woods.   A few days later there she was in the back yard.  This time I buried what was left.

Two weeks ago I was mowing the grass.  There was this: 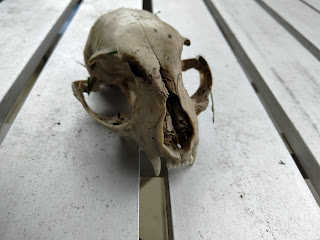 The skull of a small cat.   No other bones.  Just the skull.   Biscuit once more found and brought his friend home.  Ok.... I give up.   Her remains now "live" on a shelf on our porch.

About the porch.    Finally, the installers arrived with the CORRECT windows.  I love the way it looks. 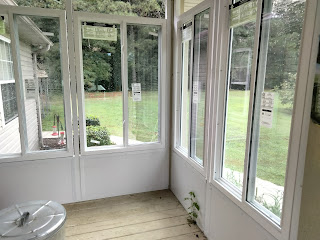 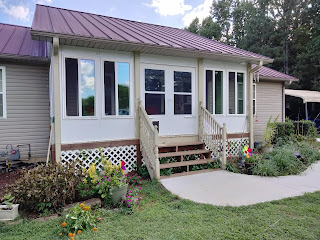 We thought about placing vinyl click in place tiles on the floor.  But first we need to lay felt paper.  It took us two days working a bit at a time get that done. 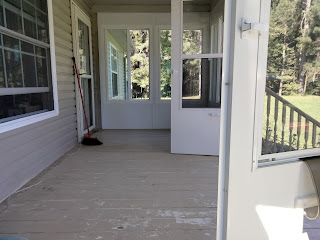 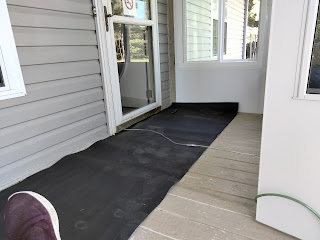 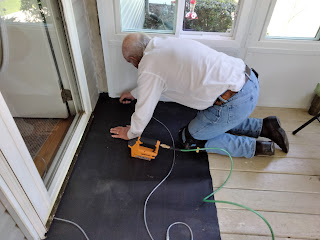 After laying the felt paper we decided to lay indoor/outdoor carpet instead.   Then after both having aches and pains we decided to have it installed.   That's the plan. At this time.  Maybe.

Our 6 week old ducks are growing fast.  And eating a lot.  But now they are prevented from coming on to the porch to leave their messes 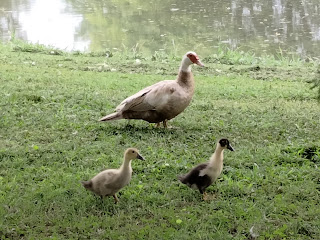 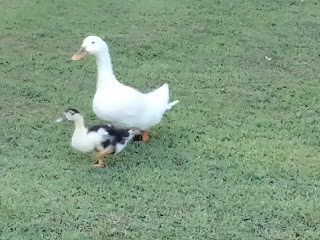 We've given up on having a garden.   We are not up to the task of tending to one.  I am sure some creatures will be disappointed next Spring. 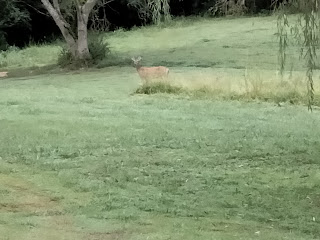