How many connections can there be?

About a year ago I connected with a lady on Facebook and I don't really remember how.  Sorry Jerilyn.   Was it related to Rving? South Jersey history?  Locations?   About the same time we both realized we knew someone in common.  The person in common (my HS friend Carolyn who now lives in Tombstone, AZ) sister was the best friend with Jerilyn's mother.    Follow that?  It gets trickier.

Sometime over the year she posted about her experiences at a Methodist summer camp in Malaga, NJ that she went to in the early 50's.  So did I.   We compared memories as we are close to the same age and were probably there at the same time.   We both remember the standard lunch fare.... bologna sandwiches.

So, I should say we grew up about 25 miles apart, in different counties.

In August I wrote a blog of tribute to a dear friend who had died.  Well, Jerilyn immediately posted that in reading my blog she realized that Clare was a HS classmate.

In the course of the year, Jerilyn posted on FB about her father-in-law once being the Pastor of a small church in Cumberland County, NJ.....Newport.   Another connection.....my daughter was married at this small church.

Knowing that she attended a rather large church in Collingswood, NJ, I asked her if she knew Rev. Robert K Hill and his wife Olive.  Rev. Hill was the pastor in my hometown church back in the early 60's.  She not only knew them but lived next door.  Their granddaughter was her best friend.  Rev. Hill officiated at my wedding to my first husband.   When he left our church, he moved back to Collingswood.

Okay..... understand the many connections?   Now it really gets spooky.

A couple of weeks ago she posted that her uncle had died.  He was being buried in the small Green Bank, NJ Methodist Church.   I posted my condolences and told her I have ancestors from the area.  Scott, Ford, Fowler.    Ford??  Ford???  Ford????   Yup....... she comes from a Ford line.  She is really into genealogy.  She asked me if I have relatives named Cobb, Snuffin.  Yup.  My fathers aunt was a Ford who married a Cobb.  She told me his name was Ridgeway.  That seemed right to me.. I don't remember him but I can remember they called him uncle Ridge.  As far as Snuffin.  She told me my great-great grandfather married a woman whose last name was Snuffin.   My older daughter has the family history.  I asked her.  Yup, that's right.

Jerilyn lives in Wilmington, DE and we are here in PA.  So yesterday we met for lunch half way between.  Compared some notes.  I know little of family lineage.  She knows a lot.  My daughter knows a lot.  Will have to compare notes.

Here is Jerilyn and her hubby Tom. 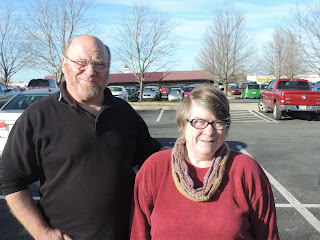 What other connections could there possibly be.  Nothing would surprise me.