I find myself looking for "what next".      I read about how dangerous it is for ducks.  They are faced with so many predators.     We found this to be true as one morning last week  instead of 3 ducks swimming in the pond, just two.   We suspect it was one of the hawks we frequently see on our property.     Every morning I get up and holding my breath look outside.  We still have the two.

Then last week I saw not only two ducks but a pair of Canada Geese. 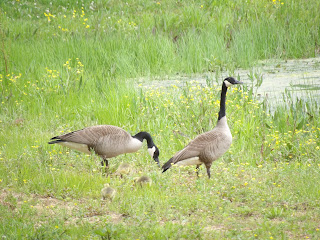 Cool!   The next day they were still there.  WOW,  no longer two geese but FIVE! 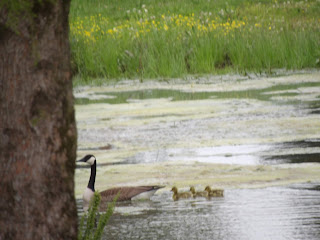 What a joy to see this family walking around near the pond and taking their swims.  The ducks seemed not to bother the geese.  They would be within a few feet of each other.

On Friday our friends Carol and Jerry Wright arrived for the weekend in their Motor Home.  When they arrived, the geese held great interest in what was going on.  Papa and Mama stood still observing as the diesel driven motor home pulled into one of our RV sites. 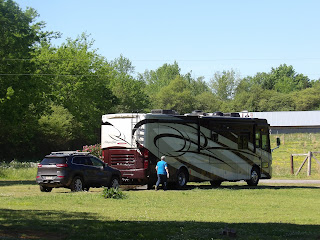 Once Carol and Jerry were parked and settled, I looked for the geese but they were gone.  I suspect they walked over the levee and into the creek that runs along our property line.  The parents are very protective of their young, too much activity and noise.  Someone told me since they were hatched near the pond there is a likelihood they will return there.  We hope so.

Carol made dinner for us on Friday and  we had a lovely catching-up visit.

Last weekend while daughter Terri was visiting we drove to the town of Trinity to Roden Surplus Imports where I purchased material for a hanging in our master bathroom.    I got a call during the week that I had won a $100 gift certificate to their store.   So on Saturday we made our way there where I purchased a few items. $100. worth of a few items.  Then we returned to the Amish restaurant that we went to last week.  Every bit as good the second visit. 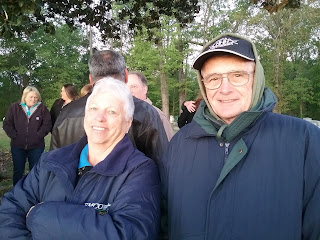 We watched the sun rise above the distant hills. 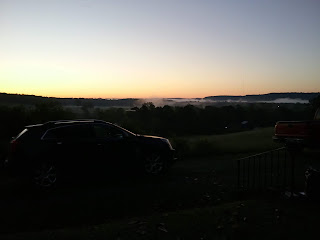 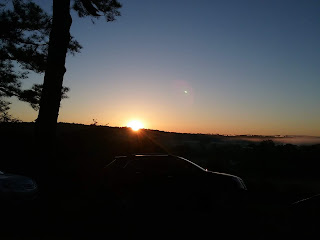 Daybreak as our Pastor, Paul, gave the message. 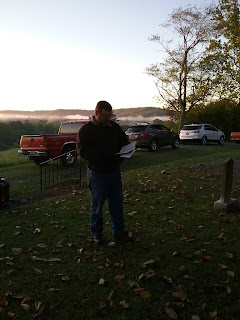 After the service it was breakfast at the nearby community center.

Later it was dinner at our house.   Carol provided a lovely pineapple cake.  Daughter-in-law Lois the cole slaw.   And we had ham, mashed red skin potatoes, applesauce, glazed carrots, rolls, pickles.  I kept thinking "what's missing???"    Later Carol went to get the cake from the refrigerator and called me over.    DEVILED EGGS!   I knew something was missing!    Okay ..... desert was the cake, brownies, cookies and deviled eggs.

Following more visiting it was time for Carol and Jerry to pull out.  They had an appointment for the yearly check up of their Tifflin Motor Coach over at Red Bay, AL the next morning.  So... good byes until probably next year about the same time.

It was then I remembered something else I forgot.  A picture of all of us together at dinner.  So here is a picture of Leonard, son Lennie and DIL Lois and Maddie and Jordan. 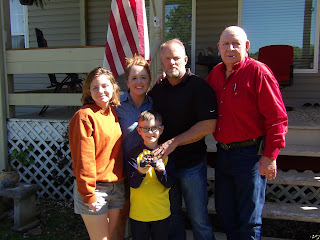 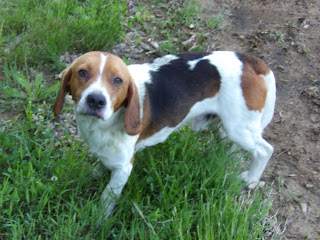 As you can see he needs some good meals.  What you can't see is the many ticks that are attached to him.   I am taking care of both.    Already I am in love with this lovable pup.  This is the 3rd day and he's still here.   I've asked around a bit but no one has claimed him.   I've always loved Beagles.

Granddaughter Abby named him Biscuit.  Uh oh.... feeding and a name.  He doesn't seem to be in any hurry to leave.