Bought one, passed on the other.

Not a heck of a lot has been going on the past few weeks.     Still waiting for information on when Leonard is cleared for shoulder surgery.     Both arms are about useless.  Can do no lifting of them.

He needs me to help him put on his shirt and socks.   Also dry his back after bathing.   He is anxious to once again be able to bush hog and do other work around here including sanding down further the front steps and staining them.

I had been having difficulties with my Dell computer for the last several months.  Slow as molasses and would not take a charge.   Finally I decided I had enough.   So off to Office Depot.

I now have a Lenovo.   Easy to get used to as it has the same Windows 10 the Dell had.  Not a good picture but here she is. 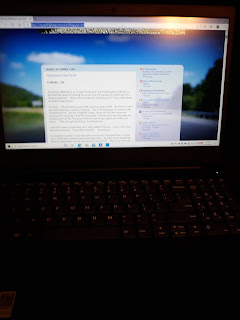 It's great I have no issues with learning a new computer operating system but it's always something to quote Gilda Radnor.    This is the first blog entry since the layout has changed.  What was wrong with the old one?   I will get it figured out.

The Dell was just sitting here in my office and I wondered what to do with it.  Then daughter Amy was telling me they were having issues with hers.  (another one I got upset with and gave her a few years back).    Not only that both granddaughters are using hers as their school has not opened and they do their classes on line at home. (Abby has since been issued one from her school).  Amy also has to use a computer frequently from home.  She is a tax accessor in Baltimore county and does a lot of research from her home office.   Her husband is an archeologist and does some reports and research from home also.    Three people one computer.