So much has happened in the short time since my last post.

When we learned the severity of Leonard's sister Lydia's condition, he needed to go to Louisiana for a final visit.     He flew down on a Monday and back Friday night two weeks ago.    Considering his health he did quite well.

He and his brother Jerry had the visit with Lydia (Monkey) then afterward enjoyed each others company over lunch.

As expected Lydia's time was short.   She passed just days later.   Her funeral in Louisiana is today.  Leonard is so thankful he had that time with her.

Last Sunday afternoon he started to feel ill.   Slept all night.   On Monday I could see he was running a temperature.   He was cold but had no other symptoms of Covid.   No headaches, body aches, shortness of breath, did not lose sense of smell or taste.   But he was extremely fatigued.   He slept most of the day.  We called his doctor who would set up a Covid test.     His temp once got as high as 105.

He was called to come to the testing site on Tuesday.   Still running high temps, but not as high.  He was less fatigued.  He stayed awake and read most of the day.   Temps were fluctuating.

On Thursday he no longer had much elevation of temperature.  Again, no chills, no severe fatigue.  Again, he read most of the day.   Then the doctor called..... no COVID,

Yesterday, Friday, he felt so much better he cooked a pot of gumbo.   That is the Cajun medicine I've learned.     Today he feels fine.  We are grateful for everyone's concern and prayers.  We could feel it.

He felt so good yesterday he had to feed his fish.    It is now a battle ducks VS catfish for the food.  We  see a lot of perch in the pond. 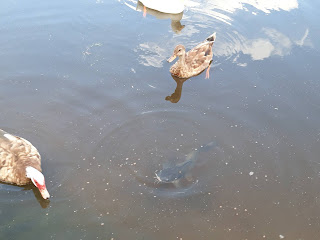 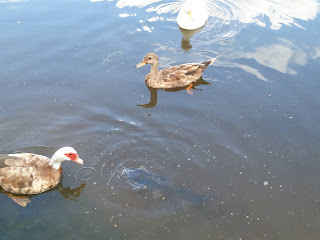 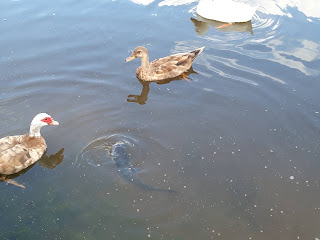 When I signed us up for BoondockersWelcome.com,   I had no idea how many people would want to stay at our sites.  I am shocked at the response.   Here are the last few.

From October 27 to October 30 in their Motorhome.   Hans and Theresa on way to Florida to get new Motorhome. 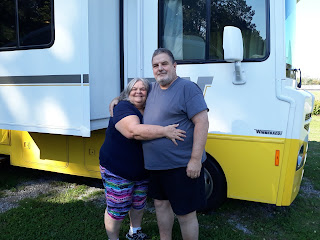 From October 31 to November 4 Rick and Nancy 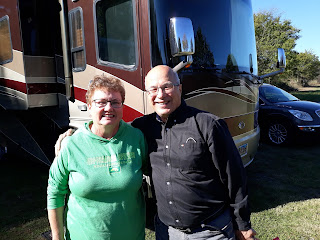 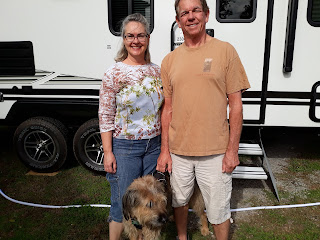 The night of November 4  were Fred and Renee.   They are from South Africa.  They came here, bought a car and RV and are traveling the country.   Here they are set up and having their cocktail hour. 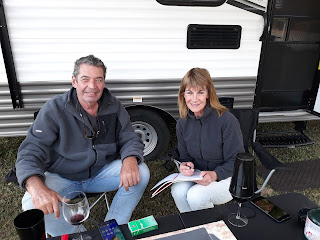 In about an hour we expect another guest.   A man traveling alone.   Later this afternoon a family arrives, young parents and their SEVEN children.     All these will be just here for the one night.

On Monday another couple for a few days.   Then on Friday 13th two more couples for 4 nights.  This will be fun.   Both men are retired Marine.    They are not traveling together.   A cool coincidence.

So far no bookings until mid December.  Yet.