As with everyone else, we had accumulated stuff over the years that we will never use.   Some of the stuff we kept even when we started RVing on a fulltime basis back in 2010.   Among those were saddles and tack and two axles.

Time to sell off some items.

We had placed 7,000 pound axles with 8,000 when we had our Cedar Creek fifth wheel.   Leonard kept the 7,000 pound ones as he planned to built a trailer.   I've had misgivings about that for the last few years. 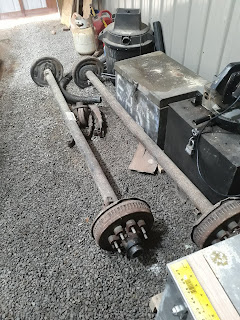 I know he has built trailers before but he was younger and stronger and had full use of both arms.  He wanted a trailer JUST IN CASE we needed to take the tractor in for repair.  Two weeks ago we were out and about and he stopped at a shop that deals in steel.   The cost of the steel would be about $7,500.  Then we would have to consider the cost of wood for the decking.   Also tires and rims.   Pretty soon we were talking about real money.   JUST IN CASE the tractor had to go to in for service.   They do rent trailers, you know.

You might say I had to put my foot down.   He was upset and a bit depressed for a few days.  But in his heart he knew I was right.   So he wanted them out of here ASAP so he would be able to accept that he would not be building a trailer again.   I listed them on the local Yard Sale site and they sold in a few days.

Then we had to think about our saddles and tack.    We had 3 saddles, two blankets, two sets of reins and bits, two breast collars, two lead ropes and a saddle rack.   We listed all for $400.    Cheap by any count.   One reply was he would give us $200 and get them out of our way that day.   My reply was they were not in our way.    After several inquiries a young woman asked if we would sell her just my saddle.  Sure.   When she and her boyfriend got here they liked what was Lens saddle but it cost more.  We made a deal and she got not only his saddle but a blanket and lead rope of her choosing and a set of reins.  She was thrilled as she is in nursing school and money is tight.  We were thrilled because we feel she was not trying to get something for nothing. 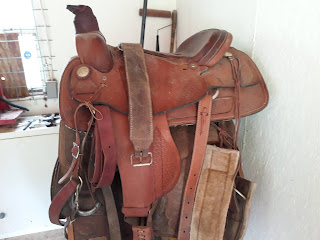 One of our recent Boondockers served 20 years in the Navy as a photographer.   He used his drone for an area shoot of our property.   Love it. 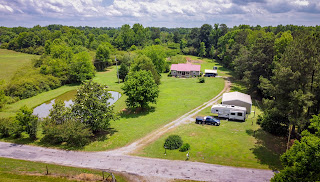 Leonard's brother Bobby and our Sister in Law were vacationing up in Pigeon Forge, TN a couple of week ago.   Bobby called Leonard and said they would stop here on their way back to SW Louisiana.

This was a double treat as the week before daughter D'Juana, SIL Joe, Granddaughter Alex and Grandson Jared stopped for overnight visit on their way to visit Granddaughter Lindsey who is in the Navy and stationed in Charleston,   SC.   They left Houston area around 4 am and got here around 4 pm.  As usual we got so wrapped up visiting that I forgot to take pictures.  But this was a delightful treat.

I did remember pictures of Bobby and Charlotte. 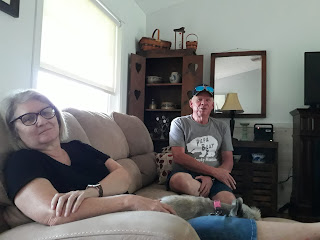 When Bobby called he told Leonard to get a list together of things he could do while here.   Since we moved here some of the lights in the basement would work sometimes, sometimes not.   Len can no longer lift his arms so this was a job for Bobby, who is an electrician.   My goodness, we have a basement that is now really lit!  Also, I've been having trouble with my mower.   So they got to work on it. 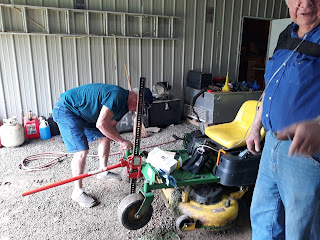 Last week we hosted a family of three.   The 6 year old daughter loves to fish with the help of her Dad.  She caught her first fish here in our pond.   Imagine her excitement when she reeled in (with a bit of help) a catfish. 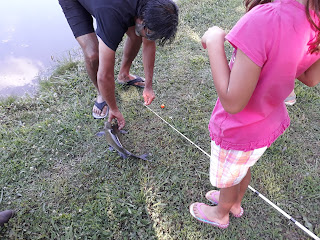 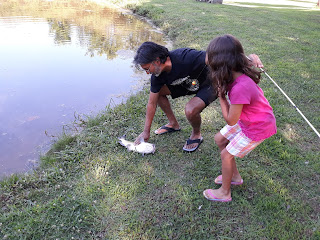 Yesterday was Fathers Day.   The man of the house here got cards and phone calls from Granddaughters Charlotte and Abby, daughters Terri and family, D'Juana and family along with a phone call from daughter Cassie.

And an invite to son Lennie and DIL Lois' house for lunch.   He came home with his favorite coconut cream pie that has become a cherished tradition.

We have guests here now at one of our sites.  These guests will be here at least until July 1.  They had requested a few day stay, having been here before.   We asked them to stay a bit longer as we leave Friday for visits to the northeast.   They will be feeding our ducks, fish and watering plants for days they are here. Other couple arrive later today but just for overnight.