More than we bargained for.

We continue with hosting Boondockers Welcome but notice a downturn in reservations.   We've only had 3 in the last few weeks.  Another arrives on Saturday.  Then NOTHING for the rest of August.   The first two weeks of September one site is completely booked.  The other open.

Len has been having health issues.   His left leg has been aching and it got to where he could hardly walk.    I took him to the ER on Sunday.   They did X-rays and Ultrasound.   Blood clot still there.  They said to follow up with his doctor.  Since he had appointments at UAB on Tuesday we hoped the rheumatologist would be able to help.    She gave him a prescription for prednisone.   It has helped a lot.  He is walking much better.   But will be seeing family doctor on Monday.

Our family has grown.    Our duck family has increased by 9, giving us 13 total.  Two ducks Elsie and Penelope were nesting.   Elsie had 15 or 16 eggs.   Penelope had 4.  Something got into Penelope's nest and destroyed her 4.  She continued to sit on just stones.   I took two from Elsie and placed them with Penelope.

What a surprise when I went out the other morning to discover that Penelope and had hatched one. 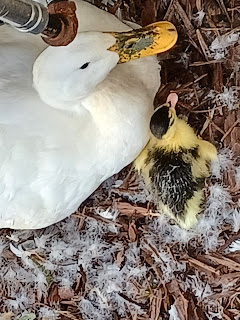 Later that day Elsie hatched 3.   By the next morning she had a total of 8.   Later that night there was a 9th.    The next morning, I found one dead by the entrance to the nesting box.   I am thinking it might have gotten trampled.

So now we have more ducks than we possibly can accommodate.    Want one, two, three? 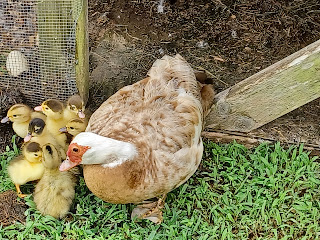 Did not take them long to find the pond. 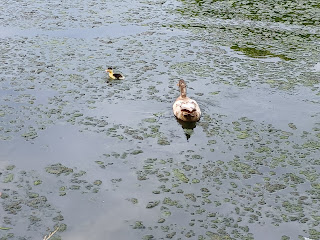 Things are settling down.   It appears they finally have our Generac whole house generator situation resolved.

The replacement door is installed in the walk-in tub.

We were notified it will just be a few weeks and the porch will be enclosed.   Then we will have to make a final decision as to what we will be doing to cover the decking.

The washer situation is also resolved.   Whoever did the original plumbing in the house put the hot water on the right and cold water on the left.   They put the right colors on the knobs to correspond with the installation.  Red on Hot, Blue on Cold.    However, the installer who hooked the washer up assumed hot on left, cold on right, which is the usual method, not realizing ours is backwards.   The service person changed it around and PRESTO.  It's working beautifully.

Almost time to leave for the Senior Center and listen to music (Len unable to dance right now) and get our $1.25 lunch.