In 1992 we moved to the small rural community of Upper Deerfield Township in southern New Jersey.  We bought a farm house built in 1850.   The house had been owned by a drug/alcohol facility about 1/2 miles up the road.  The main building at that facility once was the family home of a man by last name of Seabrook who was the founder of a large farming and frozen food company.

The first day we moved in, the maintenance manager at Seabrook House introduced himself to us. As our new house had sat empty for two years, Jim was in charge of maintenance on it.  He asked Leonard if he had ever considered doing community work and invited him to come to the local firehouse and talk about joining.  Len went and joined.

On his first call, Len rushed to the firehouse.  Not knowing the area, he asked a man headed to the fire if he could ride with him.  The man told him that since he didn't know him, no.  Leonard followed the man in his own truck.

But Len quickly got to know Calvin.  It seemed everyone in the township knew Calvin.   Calvin worked for a small family owned grocery store for 30 years until it closed in the late 90s.   Calvin was illiterate.  However, he had a way with people that many people considered "slow" often have. Keeping a constant smile on his face.

He was dedicated to Seabrook Volunteer Fire and Rescue Company and would remain that way his entire life.  He could always be counted on.  Once the men returned from a call and quite a while later someone asked, Where is Calvin?  He had been told to stay at the corner until relieved.  That he did.  Long after the situation was over.  Another time Len, as assistant chief, placed him down the road from a scene and told him "Don't let anyone through"   Once again he did as told......stopping the State Police with lights flashing, telling the officer he couldn't go any further.

Calvin never married.  Had no children.  He was one of ten children  His other family were the firefighters.  When he lost his job, Chief Jim got him on Social Security and handled his money for him.  When Jim moved and resigned, another responsible firefighter took over and assured Calvin had a place to live, a vehicle and other necessities.   Calvin earned extra spending money by an agreement with the Fire Company.  They had build a banquet hall.  They paid Calvin to attend each function.   In the contract the people renting the hall had to agree to feed Calvin.  Most also gave him a tip.   He made sure the place was always clean when the renters left.  He loved this responsibility.

We got a call from former Chief Neher a few months ago.  Calvin was dying of cancer.  His one vice were his cigarettes.  Lung cancer.  Only a couple of months to live.

He died while we were in Michigan last week.  We were thankful to be back in the area on Tuesday to attend the services.

A testament to the love the entire community had for Calvin.   Crowds at the funeral home.   Long lines going to the grave site. 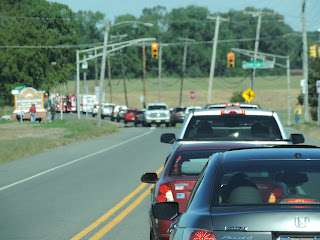 As befitting a person so dedicated to his friends and community, Calvin's body was transported to the cemetery on a firetruck. 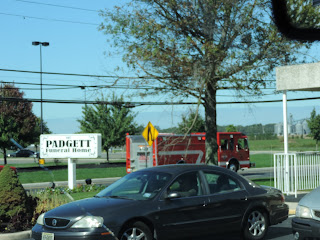 A final drive by the station. 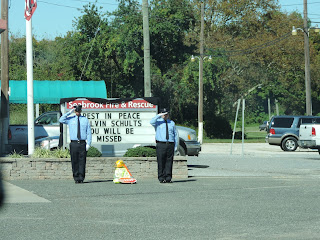 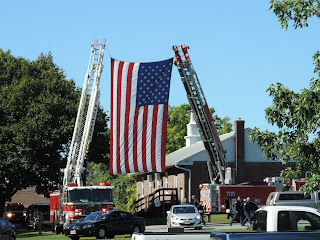 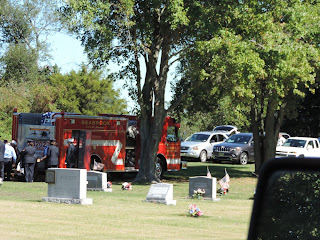 A modest man with little education.  But always, always a smile on his face.  So many children in the township will always remember Santa sitting on the back of a firetruck and waving to them on Christmas eve.   The rest of us are reminded that it's not those material things or status that really matter,  It's really about having compassion and love in our hearts.  And a smile on our face.

Rest In Peace, Calvin.  You will be missed.