And the work continues

Yes the work continues but it wasn't us doing the work.

When we bought the property there were lots of brush and trees that needed removing.   We did some.  We had a tree service do some.    That was two years ago.     We have realized that we are no longer able  to take down the bigger, nuisance, ugly trees that were planted as a barrier.

Time of clear these away.

Yesterday was the day.    The tree service arrived in the morning and got right to work. 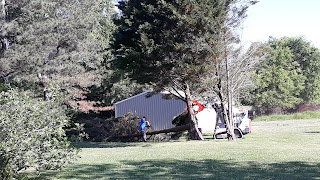 One man operated the Bobcat while the other the chain saw. 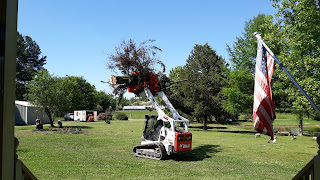 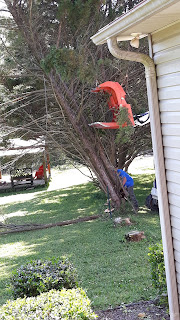 They filled the dump trailer 3 times 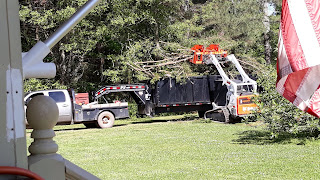 In total they took out 12 trees.

The stump grinder arrived in the afternoon.   He had ground stumps for us two years ago.  Business must be good as he had a new truck and a box trailer.    In a short period of time he had ground down the 12 trees just felled plus 13 stumps from trees we had removed.     We are amazed at how easy his job is.    All done by remote control. 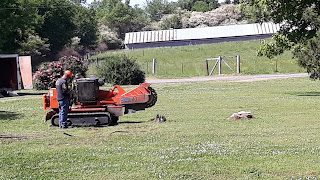 After taking away the three full loads, the 2 man tree service crew returned to clean up the yard.  Leonard told them to just dump the branches and wood chips on to our burn pile.  We had burned the pile last week but have since built it up again with brush and smaller trees we had removed from the area near the creek.  They were a wonderful job cleaning up.

A few stakes were left.   We will have to dig down around them to get them out.  This was taken before the stumps were removed. 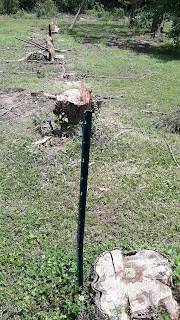 Looking from house toward the road and shop.   At one time the row of trees completely hid the house from the road.  We like looking out from the porch.   The trees hid our view of the field across the road. 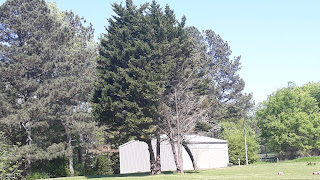 The tree left standing is an apple tree.   The apples are really sour.  The deer don't mind.  The bush on the left is a fig tree.   We like the figs.  So do the bees and birds. 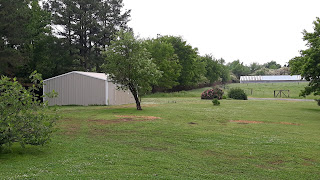 A row of trees ran along the side of the house to an open shed.  Hated mowing this area. 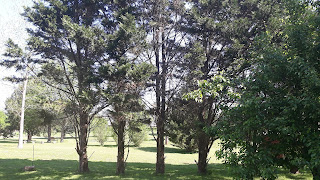 The tree on the right in both the before and after is a pear tree. We like these pears.  So do the deer. 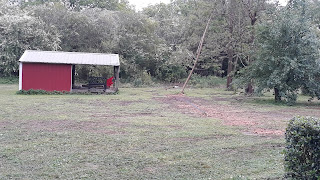 Near the mower shed.   The tree in the middle was completely dead and brown. 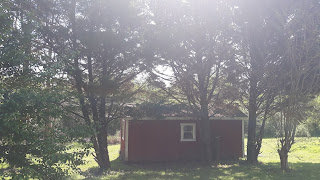 Makes it easier for me to find the where the mower is kept! 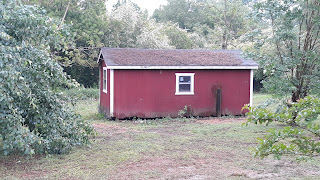 One more project accomplished.  And we didn't have to lift a finger.   Well that's not quite right.  I had to write that check.