This blog proves how exciting our life is now.   Several reasons we don't do much or go anywhere.   Feeling really old, COVID-19 and a few physical limitations.

Last fall we continued our clearing away brush project.   So far this is a 3 year project.  Not done yet. At one time this cleared space was as thick with growth as the background. 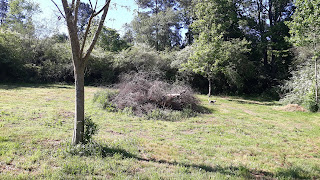 We piled the brush with the eventual plan to burn.   Today there was no wind to speak of and hey, we can't go anywhere.   So why not.   I was concerned that no bunnies were living in this pile.  We had seen 3 a few weeks ago.   None ran out this time.  Guess they moved on. 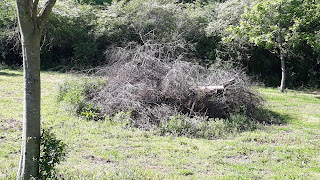 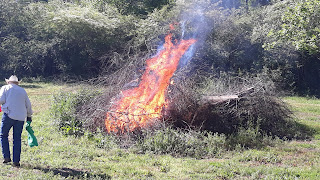 This always makes me nervous.   He likes to get as close as possible pushing brush into the flames.   I'm always afraid he will make an ash of himself. 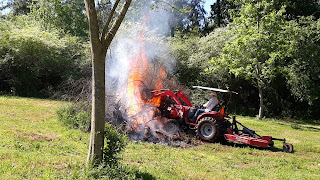 As least he has the sense to take off his Inogen Portable oxygen concentrator when getting that close. 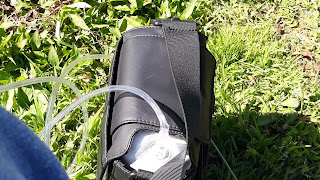 Most of the brush burned.  The rest is smothering.   We have cut a path into the woods along the small creek.   The trees and shrubs that Leonard dug up or knocked over will go on to the pile for future burning. 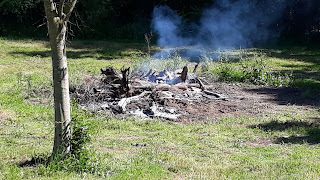 Last night I started trimming the shrubs that are on 3 sides of the house.   It was the first time I used electric hedge trimmers.    I was nervous as I am clumsy. I FALL A LOT.   Len told me not to worry as the thing shuts off automatically if I let go of the switch.   I was still a bit nervous.   Ok .... I had reason to be.   I tripped over a hose and I went down.   It did shut off.   But I have a deep cut on a finger from the rock I landed on.   I soaked three bandages.   I still have it wrapped up.  I was afraid I needed stitches but all appears fine 24 hours later.  Did I mention I have a habit of tripping over stuff?

So back at it today.  And no falling.    This is one side of the house, I will get to it tomorrow. 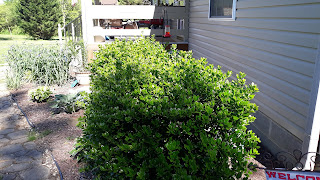 This is the side that is done. 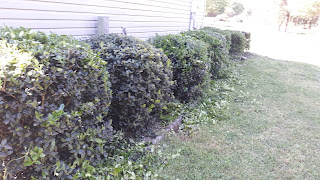 One half of the front of the house is done.   The other half I will do tomorrow.   Can't believe how much easier an electric trimmer is than the lobbers I was using.     But they are probably a lot safer.

Until next time.
Posted by Phyllis at 4:35 PM